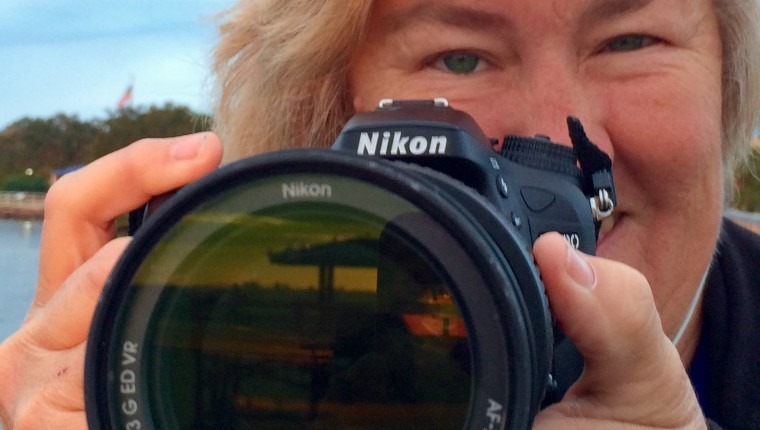 Safety Harbor visual artist and photographer Holly Apperson’s work will be showcased this Friday, August 27 when Apperson and fellow artist Ginny Allen will highlight a selection of one-of-a-kind mosaic instruments, light streamers and Apperson’s stunning photography – including the image that caught the attention of this popular downtown café’s owner, Tom Bassano.

Apperson spent years working in healthcare, in sterile indoor spaces. But she found pockets of time for what fed her creativity – making art and highlighting her surroundings in ways only she and her camera could see.

The history of Apperson’s photos date back to her teen years in Clearwater. She was shy and found ways to express herself through lenses. Her family allowed her the freedom to find her own way through creativity. It was a part of daily life.

“Our dad, we called him a Renaissance man. He was in advertising and he did technical writing for Honeywell. Later he worked at a concrete factory, but at home he would make things,” she says. “The garage was always a workshop and we’d watch him. I think he did a lot of writing when he was younger.

“Our mom took us to the theatre. She started taking clay classes, painting, stuff like that. Kiaralinda (Apperson’s sister and a founder of Safety Harbor Art and Music Center) painted rainbows on her bedroom walls and she’d climb a tree and write books.”

When her sister Kiaralinda started expanding her own art with Todd Ramquist, turning a small gray Safety Harbor home into an explosion of color that soon became a tourist attraction, Apperson was there to document much of the process with her camera. While Kiaralinda thrives in it, Apperson has never craved the spotlight. “I was always taking photos of Whimzey and more recently, SHAMc,” she says. “I did all of their installations. The goal was to be creative, not to evoke emotions from other people.”

GinHol Mosaics, Apperson’s mosaic art, have found homes throughout the Tampa Bay area and beyond. Ruth Eckerd Hall purchased six instruments for decoration during their renovation. A mosaic Lightning guitar can be seen in the Lightning Room at Cigar City Brewing. GinHol is represented at the Marietta Museum of Art & Whimsy in Sarasota, as well as at Amalie Arena. Apperson’s photos have won contests and been published in numerous publications.

She captures nature in moments that most people never get to see – birds feeding their chicks, double rainbows, a butterfly’s face, the intricate design of a dragonfly’s wing and patterns in a leaf, brilliant sunrises and sunsets, the surface of a full Moon, spoonbills and osprey, owls and eagles, and the subject matter of course, continues.

Over the past year, a time when many felt isolated and frustrated, Apperson’s images of Safety Harbor became a celebration of the buildings and spaces people were missing. She started posting daily photos to two Safety Harbor Facebook groups. She gained a dedicated following — she was evoking emotions.

“I started shooting more of Safety Harbor sunrises, sunsets, reflections,” she explains. “I think the past year and a half, I have taken more downtown pictures than I have in my entire life. People are tied to the town and it’s always going to change. You take a picture of a building and the next day you realize they just painted the roof. Everything has an evolution.”

One of her photos was in front of Bassano Cheesecake after a rainstorm. The building reflected into the street and she captured it. Tom Bassano liked it and invited her to show her work in his café. “Photography captures time,” she says.

Friday’s show will feature several GinHol mosaic instruments and their popular sun catchers, as well as Apperson’s framed photos, from 16” x 20” to smaller framed prints and greeting cards, which will also be available for purchase.

You can explore
Holly Apperson’s work at ginhol.com
or on Facebook
@GinHol-Mosaics.