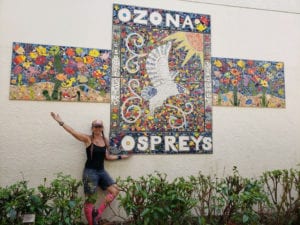 For the past three years, Heather Richardson has been inspiring Pinellas County elementary and middle school students through art.

She is the programming director and one of three founders of the Safety Harbor Art and Music Center — or SHAMc — which opened in 2016. It is a towering mosaic building reflecting sun or moonlight off mirrored panels. Curious people strolling through Safety Harbor find it, attracted by stripes and colors not usually seen in a downtown corridor.

But there are still many who don’t know places like this exist. There are many more, especially children, who are never given an opportunity to experience the process of art.

“Most elementary school students get forty minutes of art a week,” Richardson says. “And in middle school, the kids may not take art, so they may not get any exposure to it.”

Richardson is working with area schools through SHAMc ArtReach, a program she began to bring art into the community and sometimes, beyond.

Her most recent endeavor started when a teacher from Leila Davis Elementary walked into SHAMc three years ago and wanted to do something large-scale for her school.  The teacher applied for and received a grant through Referendum money. “They were the first,” Richardson says. “I didn’t know what I was doing. . . it was gigantic.”

That art teacher works with students to create individual mosaic pieces during their art education time.

“I generally go a week to two weeks,” explains Richardson. “I prefer two weeks because it is a bit more impactful. I get the kids twice.” The process, from planning the design to gluing the tiles, becomes a partnership between the art teacher, Richardson and the staff and students of each school. “At the elementary schools specifically, all the kids participate,” she explains. “A lot of the teachers participate. Even the kitchen staff.”

Since that first project with Leila Davis Elementary, ArtReach has impacted Garrison Jones Elementary, two projects at Curtis Fundamental, Ozona Elementary, Forest Lakes Elementary and Seminole Elementary. Once the school year is complete, Richardson will have finished another six projects, including Ridgecrest Elementary. “Then Carwise Middle and Lisa Nelson in March,” she adds. “I’ll be at Safety Harbor Elementary in April and Palm Harbor in May. “

A $2500 grant covers the first week. The second week’s $2500 is covered through private donors or school fundraising.

“Each school needs to have a kiln on premises,” she says. “But other than that, just a lot of kids willing to make art. It’s something the kids will remember for a long time because they’re creating a piece for the school that will last for generations.” 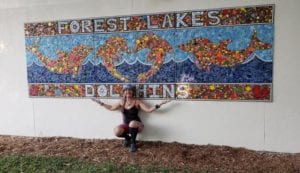 If that weren’t enough to cover through the ArtReach program, Richardson also organizes summer camps for the month of June. “We do one week of creative writing, one week of theater camp and two art camps.”

To extend the day and to expand the minds and bodies of the campers, she added a Spanish language component for the first hour of each camp and will end each day with one hour of flexibility and aerial exercises. The camps go from 9 a.m. to 4 p.m.

Richardson has always enjoyed teaching and is currently partnering with Autumn Pearson to create an after-school program. “We are also creating a way for teachers to come take a class to better teach in the classroom,” Richardson says. “You know at some point they may phase out art altogether, so we want to create continuing education for teachers because they will likely have to take over the art education.

“Ultimately, we will be looking for sponsors to help develop that over the next year or so. We have done some after-school programs already. We have worked with the Mattie Williams Neighborhood Family Center’s after-school program and we offer a monthly kids’ writing club called Tell Me Something Good. It has become a popular Sunday event for young creative writers.

“It is all ArtReach,” she says. “We aren’t just educating kids. We’re educating all ages through art, writing, music. It is cultural education — I mean, SHAMc is ArtReach, it’s our thing — education.”

Find out more about ArtReach here