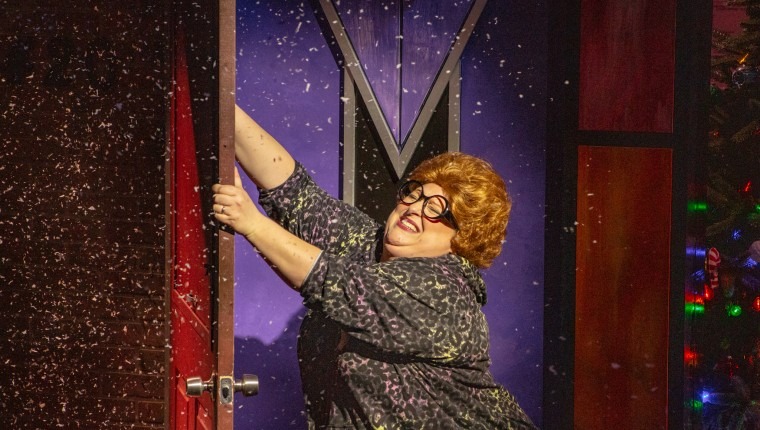 . . .
Confused by the title? (The Night Before is the actual show title.) Well, there’s no typo. We’re literally talking December 23rd here. For the purposes of this production, consider it the new “Friendsmas.”

And snow in Florida? Well it did happen, you know. . . once in 1977, but I digress. The point is, I am ever a willing suspender of disbelief.

The Night Before is a brand spanking new holiday offering – and soon to be indispensable holiday tradition – thanks to the brilliance of writer/director Matthew McGee, musical impresario Michael Raabe, and greenlit because of the visionary programming at freeFall Theatre Company, Eric Davis at the helm.
. . .

. . .
We all know Matt McGee as an uproariously funny and talented actor, drag performer, television frequenter and cabaret superstar. “By day I am the Community Outreach Director for freeFall and this will be the first production I have written and directed here,” says McGee. Full disclosure, part of this quote was originally “I occasionally perform onstage.” I told you he was hilarious.

. . .
Michael Raabe has been a consistent musical presence at freeFall, composing and arranging some of the most memorable musical moments of the past decade+ at fF. But this is the first year he is serving as Resident Musical Director, part of a staff expansion. “I’m really excited about this opportunity and this production,” he says. “And for the first time, I even have a part in the show, with actual lines!

“The show found its real premise when Michael came up with the original song that became the show’s title,” says McGee. “The idea was that the only night this group of friends could get together was on December 23rd.

“Then for a little curveball, we decided to make it snow – a white Christmas in Florida, where the friends get snowed in and hilarity ensues,” he chuckles. “It all grew from there.”
. . .

. . .
“Yes, there are original songs,” Rabbe adds, “but also many classic tunes as well, so it feels familiar. I just love the concept – it’s really got a bit of everything, so there’s something for the whole family.”

Here’s a question – How do you add characters to a play, including a pet cat, that don’t require vaccines, salaries or a litter box? The answer is delightful (and sanitary). Puppets. There are two puppet characters added to the mix and a cat named Stephen Sondheim (pause for tears).

“Of course, we had already written in the cat’s character, an original song, and many other references to the late great Sondheim,” explains McGee. “Then the terrible news of his passing hit. After we all had a good cry, we reworked some things, but kept much of it as a tribute. His picture is even on the piano.” Spoiler alert – the cat may even have a solo. You heard it here.
. . .

. . .
The very talented humans rounding out the cast of The Night Before include Rabbe (the setting is his apartment after all), in his freeFall acting debut and Hillary Scales-Lewis – Marie, of Marie & Rosetta, returning to freeFall. “I knew I wanted her for her powerhouse vocals and piano-playing skills,” says McGee.

“Sara Del Beato was a must. She’s been in more Christmas shows than any other freeFall performer.  I wanted her character to be wacky, almost Melissa McCarthy-like. She’s amazing and hilarious as cat-lady, Phyllis Shatz.”

Finally, in the unicorn casting department, “To play Oslo, a kind of comic hipster stoner who could play guitar, uke and bass,” says McGee, “we were so lucky, after a bit of a search, to find James David Larson.” Larson is making his freeFall debut, and was most recently in Atomic, Off-Broadway. “It’s just a superstar cast.”

So put on your mask, your bikini and your mittens. It’s going to be a helluva show.

Whether onstage or in the audience, as the website teaser says, “It’s one fabulous night with the family you choose.”
. . .

. . .
You can hear a conversation with Cindy Stovall, Matthew McGee and Michael Raabe on the Beauty & The ‘Burg Podcast, premiering Wednesday, December 8 at 6 pm and available on-demand afterwards at heliumradio.com. (For the live broadcast, hit “Listen Live” and choose the Life Improvement Radio channel.)