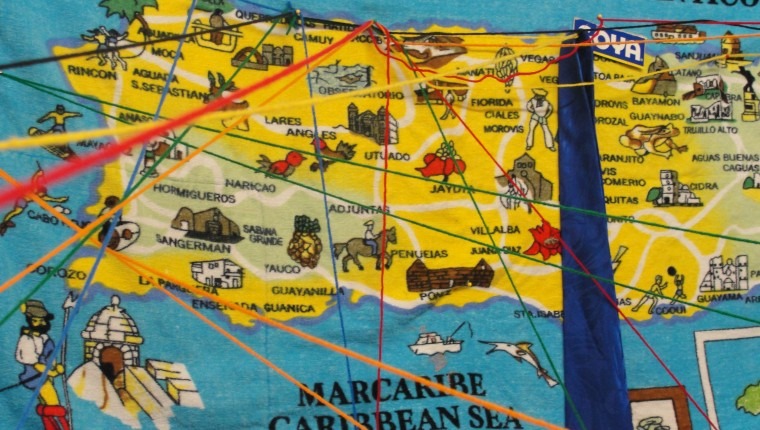 A diaspora is defined as the dispersion or migration of people away from their ancestral or indigenous homelands. I’m considered to be a part of the Puerto Rican diaspora living in the U.S. It’s kind of strange to say because Puerto Rico is a part of the U.S. And then again, it isn’t. There are scholars at this very moment trying to define, and redefine, what that actually means for Puerto Ricans. To me it means I was born and raised in one place while “being” from another.

As a kid in a military family, living on military bases around the U.S, I met a lot of people from a lot of different places, with a lot of different cultures, and several different languages. It made me appreciate all the ways we were alike in trying to hold onto our traditions and little nuances that clearly defined where we were from. Constantly moving around and traveling meant trying to find a sense of community for my parents. Into adulthood I too moved around, traveled, and also searched for my diaspora community wherever I ended up. When I would find it, we all had one thing in common-repping our country and longing for our next trip back to it.

In 2009, at the Savannah College of Art and Design, I was experimenting with ways in which my art could explain what it meant to be part of a diaspora. I thought an installation piece was perfect. My first attempt consisted of the insane task to locate everything I owned with a Puerto Rican flag on it. I, myself, couldn’t even believe how much stuff I had accumulated over the years. I set up a studio room with all of my belongings and “connected” them by way of yarn and each colored yarn told a different migration story. It was confusing, chaotic, and a fail. No one during my critique really understood it. So it was back to square one. In my second attempt I decided to make things a little more simple but tell a much deeper story. I set up my belongings in a pile on the floor. They were just a pile of unrecognizable things with a bunch of flags on them and the yarn was connected to an exact replica of my birth certificate illustrated on a wall. This time it took on a whole new message of what it meant for me to be defined as a “White Puerto Rican” of Spanish origin per my birth certificate. I share this project because it’s where my journey as an artist really began. I eventually fell in love with painting but my subject matter has been about ethnic and cultural identity ever since. With the Emerging Artist’s Grant I want to expand on the idea of my identity specifically from a diaspora’s point of view. There are so many people like me who know what it is to live in this collective space between two worlds.  My goal in my art is to connect those from the diaspora to their homelands. We are often left out of the conversations concerning our home all the while longing to just be a part of it.