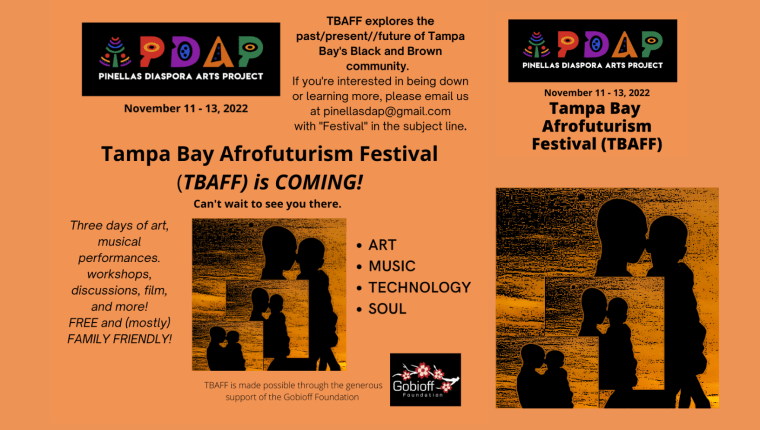 I’m generally not interested in how people classify, label, or box-in my consciousness or unconscious…so it’s hard for me to initially get behind terms or labels for movements…even those formed in opposition to forces that have historically done damage to Black folks.

But working on my aQE talks have shown me the concept of afrofuturism is a discussion worth having — and since I brought it up anyway, I’m glad it’s gaining some conversational support here in Tampa Bay.

Since traveling to an incredible Zora Neale Hurston Festival in 2020 dedicated to afrofuturism, I’ve pondered how to get something like that going in our area. Two years later… here we are, about to experience Pinellas Diaspora Art Project’s inaugural Tampa Bay Afrofuturism Festival, Nov 11 – 13, 2022.

For some definitions of afrofuturism that have been shared in discussions on the now 20+ year old movement or cultural phenomenon or whatever you want to call it, I’m turning to those at the forefront of its appearance… I would pick up some of their books, Google them, and turn to our handy visual aid for all things, YouTube, for more information if you’re interested in learning more.

“It’s one thing when black people aren’t discussed in world history. Fortunately, teams of dedicated historians and culture advocates have chipped away at the propaganda often functioning as history for the world’s students to eradicate that glaring error. But when, even in the imaginary future—a space where the mind can stretch beyond the Milky Way to envision routine space travel, cuddly space animals, talking apes, and time machines—people can’t fathom a person of non-Euro descent a hundred years into the future, a cosmic foot has to be put down.”
― Ytasha L. Womack, Afrofuturism: The World of Black Sci-Fi and Fantasy Culture

“I generally define Afrofuturism as a way of imagining possible futures through a black cultural lens.”
― Ingrid LaFleur, art curator and Afrofuturist

“Afrofuturism speaks to our moment because it alone – not the ahistorical, apolitical corporate precogs at TED talks; not the fatuous Hollywood franchises that have nothing to say about our times – offers a mythology of the future present, an explanatory narrative that recovers the lost data of historical memory, confronts the dystopian reality of black life in America, demands a place for people of color among the monorails and the Hugh Ferris monoliths of our tomorrows, insists that our Visions of Things to Come live up to our pieties about racial equality and social justice. “
― Mark Dery, cultural critic, and the white dude who coined the term afrofuturism in his book Flame Wars: The Discourse of Cyberculture (…one reason I had a hard time with the term initially, to be honest)

“One of the most prominent ways that Afrofuturism was categorized was through its ability to highlight Black people’s historical and present existence and how both past and present provides the framework for their ability to thrive in the future.”
― S.R.Toliver, Ph.D. Assistant Clinical Professor in Education Studies focusing on race and anti-racism at University of Michigan

The inaugural Tampa Bay Afrofuturism Festival will be happening November 11 – 13 (at this point… we still have requests to join in, so who knows, maybe it will extend a bit) in St. Pete and Clearwater right now. We are blessed to have the support of the Gobioff Foundation to get us going, and we are still looking for sponsorship, so pass the word. And stay tuned to PDAP’s website – https://pinellasdap.org, and social media pages: Instagram: https://www.instagram.com/pinellasdap/ and Facebook: https://www.facebook.com/PinellasDAP