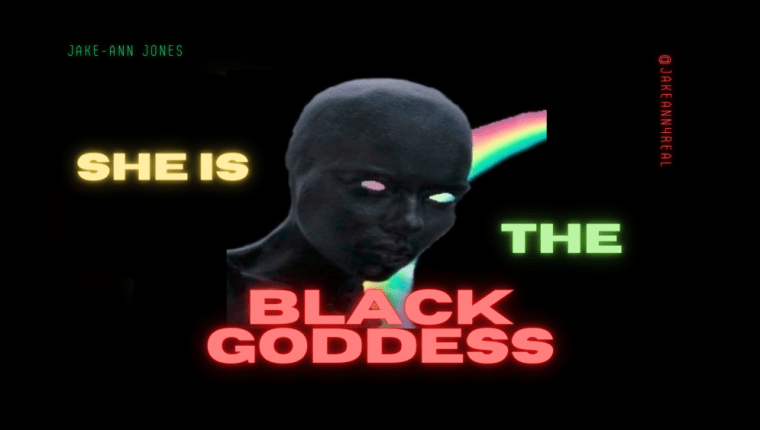 A few years ago, I wrote poetic piece o’ conjure for Gerald Jenkins’ photo-novel It’s After The End Of The World.

I didn’t know him when Darius James asked me to submit work for the book. I quickly learned he was WHITE. Ruh-roh, I thought as I read the description of the book.

However, the universe knew best; my maternal grandfather’s name was Jenkins — how could that have been a coincidence? Then I took a look at his photos — and felt like I had received a download from the Omniverse that had the undeniable stamp of afroQuantum ALL. OVER IT. And it was truly a fierce display of the Black Goddess throughout the book (more on Her later). Whoever this white boy was, he’d had a healthy injection of the aQ … (hey – that’s new. I just did that. I just shortened that, did you see that? The aQ. Am I proud of myself? I think so. I’m obnoxious aren’t I. lol)

A while later Gerald asked me to write a piece to go along with his submission of photos from the book to a British fashion and culture magazine – they wanted something on Afrofuturism. Yikes. That term… never really liked it or understood it… but okay. It’s catchy! Still… I liked my term better.

I interviewed him before I started writing, just to get a better sense of how he got all that aQ goodness up under his white skin. He told me, I believed it, and I started writing the piece.

Being that I was starting to think about just what the hell the quantity of terrestrial dark matter/dark energy combination was, I was searching to find a way to talk about it. And I was pretty sure I need to clarify what my experience with the photos were.

And although, as I wrote, “It’s understandable that Gerald Jenkins’ new book, It’s After The End Of The World, has been linked to the term Afrofuturism. The book title itself is borrowed from Sun Ra’s 1970 live album of the same name, and Ra’s poetry is interspersed throughout. Sun Ra themes – “The Outer Way” (from “The Bound Eternity”), “good vs evil” (“Angels and Demons at Play,”) and “Outer Space” (“If I Told You”) – accompany Jenkins’ cosmic “photonovel” approach to matters described by its chapter titles — Oppression, Rainbows, Mythology, Cosmology, Salvation…”

— but honestly, as I went on to write, I didn’t feel like that was exactly it. Nah. ‘Afrofuturism’ wasn’t what I was trying to get at. I was trying to get at something like a neutrino mass that floated in through our mamas’ bellies, was in the air our daddies breathed, and slid up inside any human body and soul it could, regardless of skin color, nationality, culture, what they love to call ‘race.’

It was, in fact, of the birthplace of the human – we call it Africa… but it was also imperceptible to the eye, and as I wrote, was more like a cosmic wave/particle.

And I do believe that’s actually how the term afroQuantum came to be in my head.

My brother-from-another-mother Michael Gonzales, who was also featured in the book, had already interviewed Gerald for Afropunk Magazine and given a really comprehensive breakdown on the book — so I figured, cool, I can go off on my own tangent (which I am so much better at anyway)! In my piece, I went on to get to what I REALLY wanted to interrogate in Jenkin’s use of the Black female body, and how it linked to the afroQuantum, for me:

“Surrounding the text is Jenkins’ use of mysticism, nature, dark space, cultural artifacts, signs, and pop culture commentary residing inside his spectral images. Together, the layered complexity of the work travels space-ways* that are both unsettling and provocative. I suggest that over and above the obvious Afrofuturistic signifying of It’s After The End Of The World’s spooky reconstructions of Egyptian symbolism and the occult…shiny things, metallic surfaces, and post-apocalyptic settings…and speculative ravings on alter-destiny* futures – is a cosmo-ultra-light*message.  And that message is found in each photo’s dominant signifier: the Black body – but, specifically, the Black female body.”

And then I quoted Tiffany E Barber:

“Afrofuturism has become an umbrella term for considering how science fiction, fantasy, and technology can be used to imagine and reimagine lost pasts and new futures for alienated black ‘others.’” – from “Cyborg Grammar” by Tiffany E. Barber, Afrofuturism 2.0, The Rise of Astro-Blackness

Ok. So, I did what was asked and went on to give a short history of the term Afrofuturism, mentioned the notables in its growing field of cultural criticism, and dropped a bunch of Sun Ra terms.

But I had to take it down another course pretty soon. I had to connect it all to the mother of all. I called her The Black Goddess, and linked her to Henrietta Lacks, whose cells were cloned and resulted in the immortal cell line known as HeLa. Henrietta Lacks, who was initially taught in schools as being a white woman named Helen something. Lordt. The lies. (How long Lord. How long???)

Don’t believe me? Look it up! As I wrote, “Henrietta Lacks may be long gone, but vials of her cells are easily purchasable online for under $600 dollars. Used to develop polio and AIDS vaccines, cancer treatments, to investigate the impact of radiation on human, and sent to space to determine the impact of weightless on the human body, HeLa cells’ ability to replicate without dying, aggressive growth pattern, and inhuman number of chromosomes has led one researcher to call for the line to be recategorized as a completely new species.”

(And here’s another quote, speaking of Henrietta Lacks: “One woman’s immortal cells have saved hundreds of thousands of lives.” — Neil C. Bhavsar, Futurism.com, 2017)

And then, yeah. I brought it home to Mama.

“Immortality. Forget Jesus Christ’s return: instead of a white, male God we got a Black, female, Goddess. The one who suffered and never died was a Black woman born in 1920 in Roanoke, Virginia. Her cells have traveled around the world helping to heal the bodies of hundreds and thousands of humans in the 70 years since her departure to the omni-all*. And HeLa cells will continue to live on, long after you and I are gone. Science fact…not science fiction.

The connection between Jenkins’ photonovel and HeLa?  The Black Goddess and the afroQuantum.

In Physics, quantum is used to describe the smallest quantities, particles, or packets of transferrable energy functioning at subatomic levels. AfroQuantum describes the consciousness-energy that developed along with humans from the beginning of time. Rather than Afrofuturism’s wide-view interrogation of the cultural/technological production from the African diaspora, afroQuantum simply expresses an eternal, conscious, energy…a vibe. And, like one of Lacks’ cells, it is not only transferrable — it attaches to, combines with, overtakes, and transforms everything it comes into contact with.  Important to note: One can be possessed by the afroQuantum, regardless of who their people are.”

And of Gerald’s photos, I went on to write,

“Jenkins’ subjects float, ethereal, otherworldly, angelic. Or, sometimes, they convict us with baleful, contemptuous glares. Or, zing us with their supranatural beauty. But, like the Black Goddess throughout history — from the Black Madonna, to India’s Kali, to Egypt’s Hathor, to the Yoruba Goddess Oduduwa – they are “above reproach” and “beyond our comprehension.” The Black Goddess is timeless, all-knowing, holds magic…and offers protection to those who adore her.”

Soooooo… the piece was rejected by the British magazine in the end. Not what they wanted. Not enough focus on Afrofuturism, Gerald mournfully informed me. I was neither shocked nor surprised, nor did I care. Too much Black Goddess, was my belief. And what the hell, I’m sure the white British male editor wondered, was an afroQuantum anyway? Whose science was THAT?  Of course, the short answer to that was, and is —

And so, here we are today.

Yep. That is really how I think the aQ made its grand entrance into my dome for real.