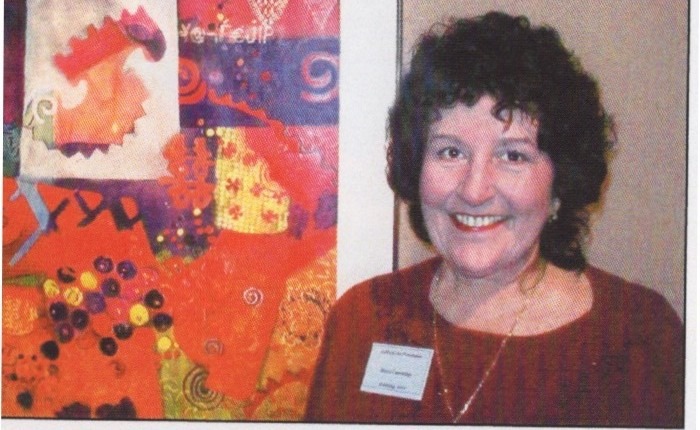 The grand marble staircase, flanked by knights’ metal armor circa middle ages, led to the 2nd floor of the Detroit Institute of Art. I played on those stairs with my sister and cousins. The Steps were removed when the museum was renovated in 2007. That childhood playground influenced my love of art and started a deep yearning to express myself on canvas. I watched people carrying portfolios, not knowing what was in them, I thought, “I want to carry one of those.”

I started my formal art education after my children were in college. My first painting course was in Experimental Watermedia with Mary Lowe at Dunedin Fine Art Center. Little did I know that eight years later I would be teaching that class. My sessions were popular, half of the people became a core group. We all learned about painting and about each other. As we bonded we all agreed that the time spent was our mental and creative therapy.

In 2005 I moved to the foothills of the Catskill Mountains, New York. Located about 10 miles outside Oneonta, a college town. Treadwell, a tiny town, was known as a cultural mecca because of the large number of artists living in the surrounding area and our annual art show Stage Coach Run Art Festival. We opened our homes and studios hosting other creators to show their work. Hundreds of people came to the event. The 21st Annual was the last one I participated in. This experience cemented my vision of being involved in an artist community.

It’s been my privilege to conduct workshops on cruise ships, National Watercolor Societies and locally. In 2017 I accompanied Hartwick College professor Dr. Lisa Onorato and her class went to Hawaii to teach art to her students for the course “The Psychology of Creativity.” I love teaching and motivating people to explore their imaginations at levels they never thought possible.

Watercolor was one of my favorite classes until I took a workshop with Mary Todd Beam. The experience changed my life. I began exploring abstractions, using Golden Fluid Acrylics, which are still my go to paints. Her colors of choice are Turquoise (Phthalo),Quinacridone Crimson, and Quinacridone Gold.Those three colors were enough to keep me inspired and I slowly added more delicious hues to my array of pigments. Twenty some years later Mary, her books and the transparent colors, still inspires me. I want my students to be excited like I was and to keep exploring and having fun with their mediums of choice.

In 2019 I returned to my roots, Pinellas County and the art world. As I was writing the Emerging artist grant I realized how the move set me back in my art career. I will never regret living in the Catskill Mountains. I developed wonderful relationships with many people. I was involved in the local art center in town, CANO, Community Arts Network of Oneonta. In 2007 I was featured in a two person show, which became the first of many. I entered member shows, won awards and taught classes, in my home studio, several art centers and in the school system of Delaware and Otsego counties. I was selected to be on the board of CANO up until I returned to Pinellas County. I’d be remiss if I didn’t mention my writing group. We laughed, cried, told each other secrets and complained. This all seems to fit since I was also in a writing group when I started painting. The arts intermingle with each other.

Coming back has its challenges. Everything changed. The arts are flourishing. Just as I was beginning to reestablish myself, life came to a standstill. Fortunately I had a great studio where I was able to continue exploring the possibilities in paint. I have gallery and studio space at St. Pete Artworks, I am also on the board of directors of the Co-Op. I am continuing to be involved in the growth of the Art Community in Pinellas County.

Next: Meeting My Mentor