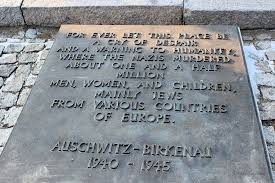 I often read this poem by Pastor Martin Niemöller as a touchstone, particularly now, as I embark on research for a new play based on characters from Shakespeare’s The Merchant Of Venice.

Several years ago, it was my great honor to be part of a group of writers commissioned to create a work for the Gold Coast Jewish Community and Family Services. During my time working on the piece, I was given access to survivors of the Holocaust now living here in Tampa Bay. On one occasion, I was given the privilege of attending a support group for survivors and realized that one of the attendees was my own neighbor.                       I had no idea. The thought that I had lived behind this man for more than five years (and my parents for over thirty five years) and did not know who he was struck me deeply. And yet, after the piece was finished and presented, I had no real contact with my neighbor. It wasn’t until several years had past that we encountered each other while (separately) walking in our neighborhood. He recognized me, and I him, and he told me he wanted to write his life story. Would I help him? I agreed and spent several lovely afternoons on his patio, listening and asking questions. He was ninety-five at the time.

Circumstances have separated us once again and we do not speak any longer, but he continues to live in the house behind mine. I hope the start he made on his story will continue to be written and that he will be part of the remembrance we hold as a people of our fellow humans and the journey we must never make again.

Perhaps it it stories like his that speak the oldest against the present slaughter of innocents and cries the loudest for us to never look away again.

Please visit the Gulf Coast JCFS website to see how you can be part of the story.

And visit the SHOAH Foundation website as well. This organization records testimonies and strives to name all those who were victims of the Holocaust.