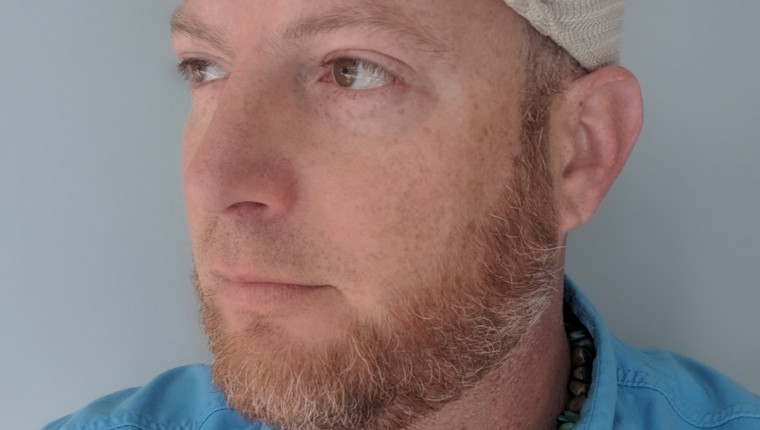 Daniel works in various artistic mediums including painting, mixed media illustration, watercolor, graphic/product design, jewelry, photography, and murals.
The creative works from the mind of Daniel Barojas seek to cultivate a visual world that is a brew of elements from traditional cultures, ancient mythologies, and popular fables mixed with urban influences. Seeking a balance between the subject, and shapes, patterns or illusions, balanced by a heavy dose of color, is Daniel’s method to create a deeper relationship with both the process of creation and the outcome of artistic input.

Daniel’s mission is to spread positivity by means of creativity. Creativity is a force that can have a great impact on peoples’ lives. Through my years exploring artistic endeavors in the visual realm, I have tried to convey creative expressions that positively reach others.
The ultimate goal is finding avenues for using art, design, creativity, and visual elements that promote a steady and expansive growth both personal, professional, and spiritual.
Manifesting creativity using subject matters and artistic styles that garner a second look or an introspective moment of depth, movement, and reflection for the viewer.

Artworks are created with a complex approach of drawing a pattern or visual illusion, onto which the subject matter is drawn. The subject is painted, and the pattern or visual illusion is applied in tones or overlays for each color/tone, so the pattern remains and maintains its optical illusion or effect. Complex color combinations and impactful color-play are achieved through mixing and matching of tones and values of the multiple colors used in the murals by Daniel.

The use of patterns, visual illusions, and op-art style illusions give the artworks motion and depth, and the use of colors give the artworks an extremely vivid subject to explore. The intention behind this approach to paintings is to create artworks that give the viewer a sense of wonderment, playing with the visual planes of sight, bringing both the subject matter and the pattern or illusion on a constant harmonious play with each other.
Color is such an integral part in most everyone’s life, this mural will focus on delivering that visual experience for the public to enjoy and learn from the colors, subject, and artistic intent.

Traditionally painting is a somewhat straightforward approach where a subject or abstraction is painted in the artists’ style on a chosen surface and then displayed for the viewer to examine or interpret what is in front of them.
The current artworks by Daniel “R5” Barojas seek to challenge that traditional approach by incorporating elements into the artworks that may cause the viewer to see more than they expect. When artwork can provide the viewer with unexpected interpretations or trick the visual planes and visual understanding of the viewer, perhaps it can add another dimension in which to admire the artwork.

Daniels dedication to public art accessible to the community can be seen in many of his public murals, some noteworthy examples include:

• The Carter G Woodson African American Museum recently chose a diverse group of artists to paint a Black Lives Matter Mural in which Daniel painter the letter R during a community event and was subsequently interviewed and photographed for online and print publication in local newspapers such as the Tampa Bay Times.

• The “Artist Award” from the St. Pete Arts Alliance allowed Daniel to paint a large mural with a tribute to the Tocobaga Indians, this mural included community participation where various children from the community assisted Daniel during an artistic outreach to the public further engaging with them about the method and discipline of mural painting.

• Creative Pinellas awarded Daniel the “Emerging Artist Award” for which he created a series of engaging paintings that featured a subject in conjunction with a visual illusion or pattern. Furthermore, the audience was provided Croma-Depth glasses that exacerbate the visual planes based on colors and further give the paintings 3Dimensional elements. This crowd participation further engaged the viewer in examining the various facets of the paintings.

• In Texas two 16 story buildings were painted by artist Pixel Pancho. Goldman Global Arts and Pixel Pancho hired Daniel to be the Lead Assistant in this massive project painted on a swing-lift on the Case Building in Deep Ellum Dallas Texas.

• In Washinton DC in 2021, Daniel was again called to be the “Artist Team Lead” on a massive project for the new Signal House building by Carr Properties in Union Market. For this project, Daniel assisted artist Cita Sadeli aka Miss Chelove on all phases of preparation/production/painting/installation of 4 outside ceiling murals comprised of over two hundred individual panels.