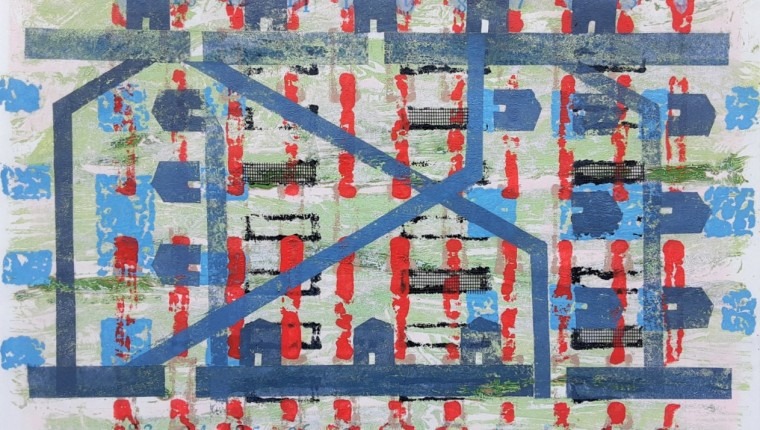 In early 2000 I taught an art class while working with the Sulfur Springs non-profit art organization Community Stepping Stones. I taught art classes in a vacant apartment in Robles Park Village in Tampa. At the time, I wasn’t aware, nor were the Robles Park residents, that their houses were sitting on top of more than one hundred buried grave sites known as the Zion cemetery, a final resting place of people of color. It had been ignored for years until recently, a few years ago, when the media began bringing it to the public attention.

I also took notice and started working on a print referencing the images seen on public media. In August 2019 and later updated in June 2020, Columnist Paul Guzzo wrote a special report in the Tampa Bay Times about the forgotten cemetery. The news prompted the Housing Authority to hire archaeologist Eric Prendergast to investigate further. He used a ground-penetrating radar which showed “reflections of rectangular objects that are the size and shape of coffins between four and six feet in depth.” The 3D laser scan is made from two data sources and aligns with historical maps of the former Zion Cemetery. Radar finds more than 120 coffins buried beneath Tampa apartment complex (tampabay.com) I took note of these reports and images as they were exposed to the public in the media and was intrigued by them. They inspired me to create a print as a memorial to honor the diseased black families of those once buried at Zion Cemetery and the families now living on the despoiled graves of family ancestors.
As the media brought these extraordinary images to the public, I was intrigued by the colors and shapes portrayed in the 3D laser photos and the outlined positions of the hidden graves. But I was also appalled by how that once sacred land had been bought, sold, and bought again years ago, blotting out the history of the Zion cemetery and the sanctity of the black families buried there. Because of my previous connection to teaching art at Robles Park Village and being in that place on that soil where the graves were discovered, I decided to create a print honoring the forgotten ancestors in the displaced graves.
I used a monotype technique using pink and green for my first layer of printing ink. The green represents the cultivated grass and the original landscape. My second layer was blue, as seen in the images. Red was added later, and then the grey of the walkways and buildings. Each layer of ink takes two to three days to dry, a slow process. Using hand rubbing and hand-cut stencils, I continued the process until I had five layers of various colors and lines reflecting some images I saw on the media. The numbered areas are taken from the actual markings of a Zion Cemetery document. This is my interpretation. It is titled, Zion. Although the print started in January 2022, selling my house and studio prevented me from completing it until now.