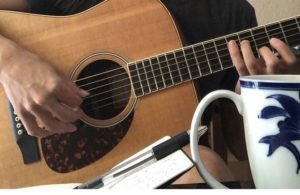 Every songwriter seems to have a knack for writing the music or writing the lyrics, unless you are one of the gifted few who can do both with ease. I have certainly found writing lyrics to be more difficult, as have many of my fellow songwriters. And as a classically trained guitarist, the instrument has always been my native language. I can typically just improvise for a little bit and come up with a riff or a hook from which I can build a new song. I have had to approach writing lyrics much more systematically. There certainly is no one perfect formula for writing songs, but here are some of my techniques for writing lyrics.

Start with a mood or idea.

Think about what kind of song you want to write. You may already have written the music, which gives you an abstract idea of the character of the song. If you are a lyrics-first type of songwriter, then think about a concept and expand outward from there. If you don’t know what to write about, try listening to some of your favorite songs for inspiration. Love is a universal theme, and thousands upon thousands of songs have been written about love. Even then you can think about writing a charming song about someone you fancy or about heartbreak. Again, these themes are universal, and the world will never tire of these songs provided they are well written and sincere.

So try starting with the idea. The mood. Then expanding that into to a single catchphrase like “Don’t think twice, it’s alright” or “Heart of gold”. Those have become two iconic songs by the timeless songwriters Bob Dylan, and Neil Young. In all of my recent songs, I worked around a feeling that I could encapsulate into a single phrase. My most recently released song is called “City Lights”, which I wrote about the wonderment of wanderlust I experienced while visiting the illuminated streets of Amsterdam, Paris, and London, thus every verse of the song culminates in the phrase “We can be anyone tonight | Underneath these city lights”. In two songs about about heartbreak, I started with the phrase “Everything I see reminds me of you” and “As I disappear in your rearview mirror” and expanded outward.

It is really difficult for me to write about abstract concepts. I can’t just write a song about being happy, morose, etc. Instead, I think of something I can visualize or that tells some kind of story or narrative. I often write in 1st person because it makes my writing feel more genuine, although we know John Cougar Mellancamp wrote “a little ditty about Jack & Diane” in 3rd person. Same idea though. He took an abstract idea about life in small town midwest and personified it with fictional characters that we could visualize in the story.

“Rearview Mirror” was written based on a very vivid dream about a past relationship. And instead of just writing a sad break-up song, I actually wrote down the dream in a journal and did my best to narrate the actual scene that transpired in the dream with as much attention to detail as possible. The lyrics seemed to fall into place within the span of a few days once I really immersed myself in transcribing the story.

“Reminders of You” is also a song about heartbreak that song was loosely inspired by “I just don’t think I’ll ever get over you” by Colin Hay. In one of the later verse he writes “I still find pieces of your presence here | even after all these years”. I found that line to be particularly poignant because it reminds the audience of something tangible–old photos, gifts, etc. So I decided to expand on that motive. When I was writing “Reminders of You” I could actually visualize the red pillow and the blue light on my nightstand, which gave me something to work from besides just wanting to write a generic song about heartbreak.

Both of these original songs started with a tagline in the chorus: ‘Everything I see/do/try reminds me of you’ and ‘As I disappear in your rearview mirror’.

Generally speaking, it can be difficult for writers with expansive vocabularies to be brief, but remember that something overwritten–that is, with many words or syllables–can be very difficult to set to music. And try to be reasonably consistent with the number of syllabus in each line. Often 4-8 syllables work well. (i.e. So Love, love me do | You know I love you | etc. “Love me do” by The Beatles. Less is more. But if you need more than 8 syllables to deliver your content, you can always experiment with a faster delivery of the melody. I’ll get to setting the melody in the next post.

Most songs have a chorus or a refrain, in which the lyrics repeat each time. This is supposed to be the catchiest hook of the song, so often simple is better. Because it is easier for an audience to sing it back after a single listen and get stuck in their heads. If we look at the classic example of “Johnny B Goode” by Chuck Berry, the verses are packed with fast-paced, changing lyrics, but the chorus is a simple, catchy “Go, Johnny Go, Go!”

Don’t be afraid of repetition.

Refining your skillset in any discipline takes practice. A lot of it. Athletes don’t become Olympians from natural talent alone. Great writers aren’t just born with it. And while there is no denying that the early hits by The Beatles launched them to unprecedented international stardom, Sgt. Pepper’s Lonely Hearts Club Band was the band’s eighth studio album. The band has over 200 songs in their catalogue, and most music critics agree that the later repertoire is what defined the group’s influence. Writing great songs takes practice. Keep writing. Even if you don’t like what you have, save it, revise it, re-write it. Even Beethoven revised his opera Fidelio several times after its first premiere.

I often feel like I write my best work when I dedicate time specifically to writing. I literally wrote all of the lyrics to “Rearview Mirror” on a tour bus of the Irish countryside. I was in a relatively quiet but stimulating and inspiring environment. Some people can scribble thoughts down throughout the day and multitask, but most of us cannot. Find a quiet space/time where you can work most effectively, free from distractions. Again, there is no perfect formula to write songs, but these tips should help.