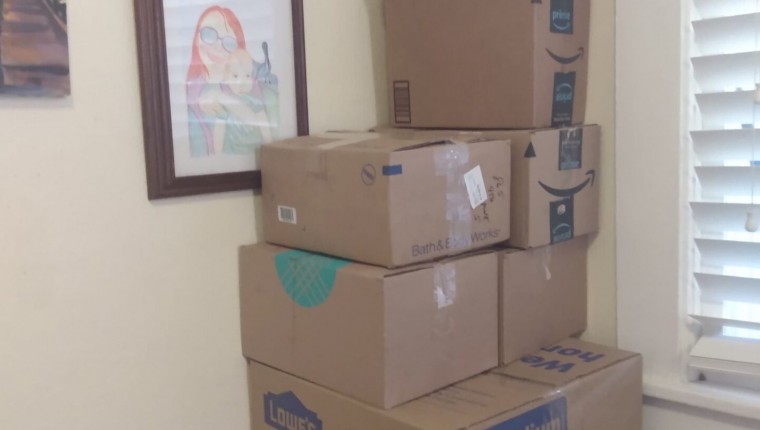 The other day I was strolling Teddy in the sunshine and listening with my Bluetooth to a poetry reading by Sharon Olds at Emory University in 2014. She said something that I can really relate to as a poet: “When I’m reading you the poems I’m seeing how it was just ordinary things in an ordinary life that I wanted to put into poetry.”

She then read “The Race,” which tells the striking story of her running through the airport to catch a flight to see her dying father one last time, which you can read here: https://thebestamericanpoetry.typepad.com/the_best_american_poetry/the-race-by-sharon-olds.html

Like Sharon Olds, I write a lot of narrative poems. For me, it’s a way of making sense of the events of life, and in poetry form, the ordinary becomes extraordinary. I think that life is jam-packed with magical and rich moments, but if we don’t look closely enough, we miss them. Poetry makes us become better observers of our lives so that when we look closely at the ordinary, we see the extraordinary. 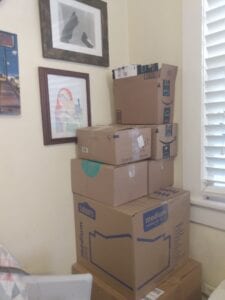 I’ve lived in over fifteen apartments over the last two decades, and I am thrilled that Thaddeus and I (along with our baby and cat) will have our own house for the first time. Now that my life is filled with boxes and I’m deciding what to take with us into this new chapter, I’ve been thinking of a poem I wrote a few years back when my parents were selling their house called “Selling My Childhood Home.” The poem appears in my chapbook, Snow Angels on the Living Room Floor, published in 2018 by Finishing Line Press. In my attempt to take at least a baby step towards minimalism, I am thinking of my poem as I pack because the poem serves as a reminder to let things go that no longer serve me or bring me joy. I, like many of my family members, like to hold onto things. Here is a narrative poem about an ordinary part of my life.

I yank open the cardboard flaps of yet another box

lugged up from the basement, pour a glass of Clean Slate Riesling,

chosen by Thaddeus, because all month I’ve gone through boxes

We asked the realtor for a picture of him by the sign.

so that’s what we’re left with.

Thaddeus gasps at the pile of boxes, says

Growing up, I was given one drawer of a hallway dresser

and anything that didn’t fit, I got rid of.

We come from a long line of hoarders, but we’re

doing well compared to my aunt who has boxes stacked

to ceilings, and paths snaking through them.

My other aunt has filled the spare bathroom

with her late ex-husband’s things.

What is it we’re afraid to let go of?

Each trinket given away is a page of history.

Lost. We write the story of our lives with objects.

But when rooms become stuffed with pages busting the binding,

we toss them into totes and drag them to the basement.

No one opens the covers—

besides they stink too much.

My mother, watching me throw most things into a trash bag,

attempting to bite her tongue, says, But Sara—don’t you want

your softball trophies (I played outfield), and what about your drawing

of the diner, and you’re not giving away that stuffed smiley face

with the graduation cap that everyone signed at your party, are you?

I got that for you.

Our guest room in Florida is filled with totes!

I tell them about the documentary

My childhood dolls look like they belong in coffins.

The Barbies are moldy and missing heads.

I open another box of mildewy clothes, and—

That’s your baby blanket, my mother tells me

as I unfold it, amazed that it survived.

My mother, wide-eyed at the edge of the couch,

acts like tossing it would be rejecting where I came from.

I know she’s replaying a memory of me

in my crib with this blanket.

I set it into a box marked Save, then take it out,

wrap it around my shoulders—

the first thing that held me

when I had to be left alone.