Skip to content
The fundraiser for the League of Women Voters celebrated the power of womanhood with a variety of stories, poems and essays — and red cloaks — inspired by Margaret Atwood’s famed dystopian bestseller.

When Margaret Atwood wrote The Handmaid’s Tale in 1984, she brought to disturbing life an oppressive, patriarchal social order that strips women of their identity and relegates them to domestic roles. Atwood has said in interviews that the rise of the Christian right in America during the 1970s and early ’80s, the Salem witch trials and the 1979 Islamic Revolution in Iran inspired the nightmare scenario.

Thirty-three years later äóî amid a modern-day climate of unsettling women’s rights infringements äóî an Emmy-winning television adaptation on Hulu has brought the book into the pop culture vernacular, and in light of recent setbacks regarding reproductive freedom; marches led by women in red cloaks; and the revelations of The Silence Breakers, Atwood’s cautionary fable has become even more relevant.

Inspired by the book’s popularity and resonance with women, theæLeague of Women Voters of the St. Petersburg Area andæKeep St. Pete Lit presented “Handmaids Respond: A Literary Speakout” on Nov. 30 at Soft Water Studios.æMembers of the League of Women Voters mingled with the public and provided brochures, featured a snazzy T-shirt for sale and a petition to restore voter rights to ex-felons who have paid their debt to society.

KSPL has hosted several similar “ekprhastics” — events involving the presentation of works inspired by other works of art –æand the “Handmaids Respond” might be the first in a tradition of literature-driven fundraisers.

The works featured accompanying passages from the book and ranged in tone and style; published and award-winning works in addition to freshly drafted pieces created just for the event. Formats ran the gamut from personal essay to poems to short stories to a “redacted” piece by former Creative Pinellas Director/Bluebird Books Bus founder Gordon and a comedic performance with costume changes by True Stories host Kirchner.æ Click hereæfor some of the works performed.

Amy Hamric Weintraub, the League of Women Voters’ Chair, Reproductive Right Action Group, League of Women Voters St. Petersburg Area, gave a moving speech before the writers took the stage. “The readings and performances were inspiring,” she said, “and the solidarity between the writers and the audience, who hung on every word. was palpable. Thatäó»s the solidarity we need.”

Weintraub added that now is the time to join together and loudly call out the sexism and anti-women policies everywhere äóñ or risk starring in a real-life version of The Handmaidäó»s Tale. “The League of Women Voters originated out of the suffrage movement and we continue to support womenäó»s rights as an extension of our desire to create an equitable society,” she added. “Events such as the ‘Handmaids Respond’ empower us and our work and help folks know how to get involved.”

“It’s important to us that we curate our events with a wide variety of voices, viewpoints and writing styles; we feel this creates a dynamic art/literary experience,” McDole said after the event. She explained that allowing writers freedom of topic and medium gives the audience the opportunity to see perspectives that they might not have witnessed before and/or the opportunity to recognize their own reality in the written works and performances.æ “Our hope is this creates a space for positive dialogue and is thought provoking for all involved.”
Photos by Daniel Veintimilla. 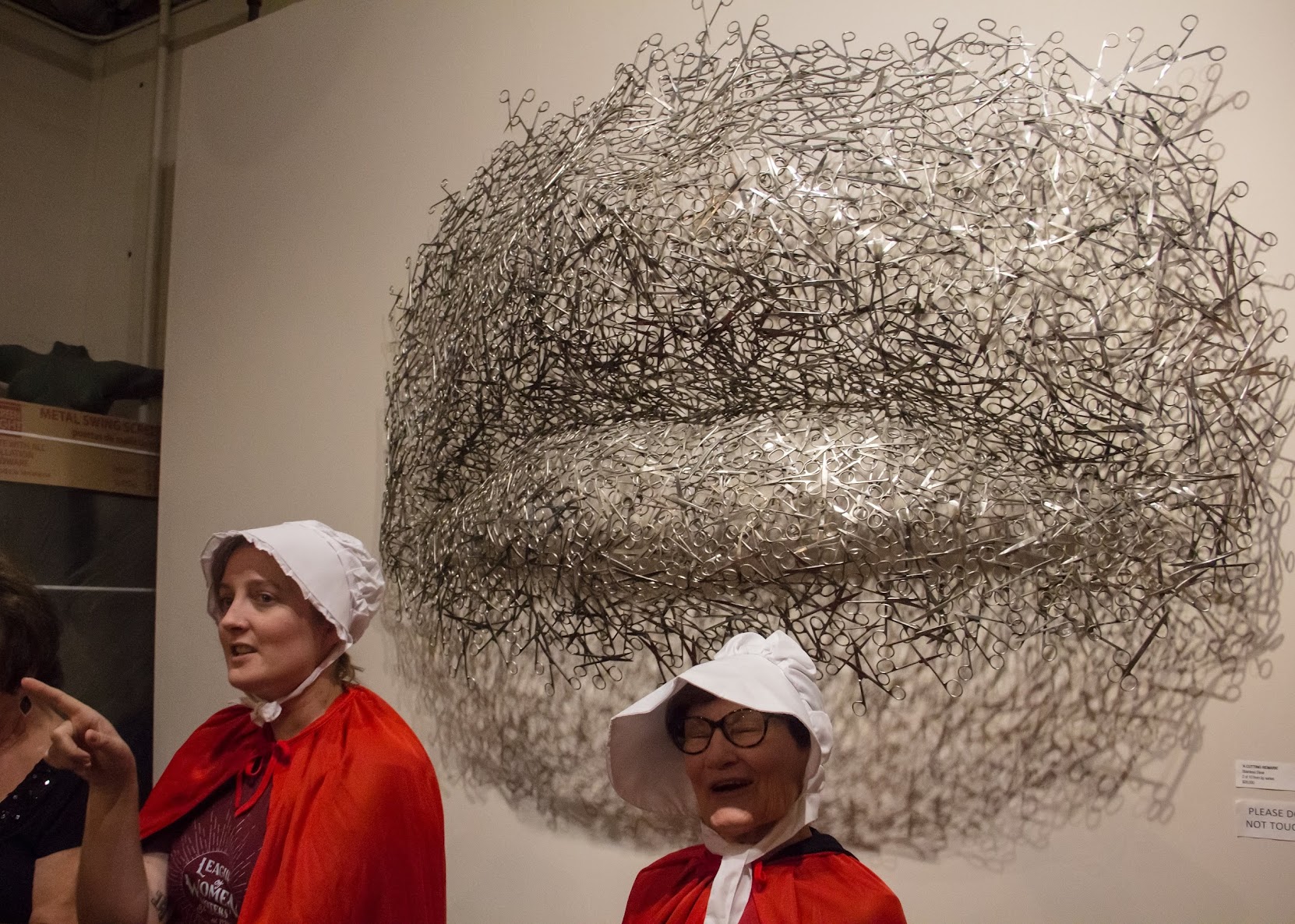 Volunteers from the League of Women Voters and Keep St. Pete Lit greet the crowd and serve beverages before the event. 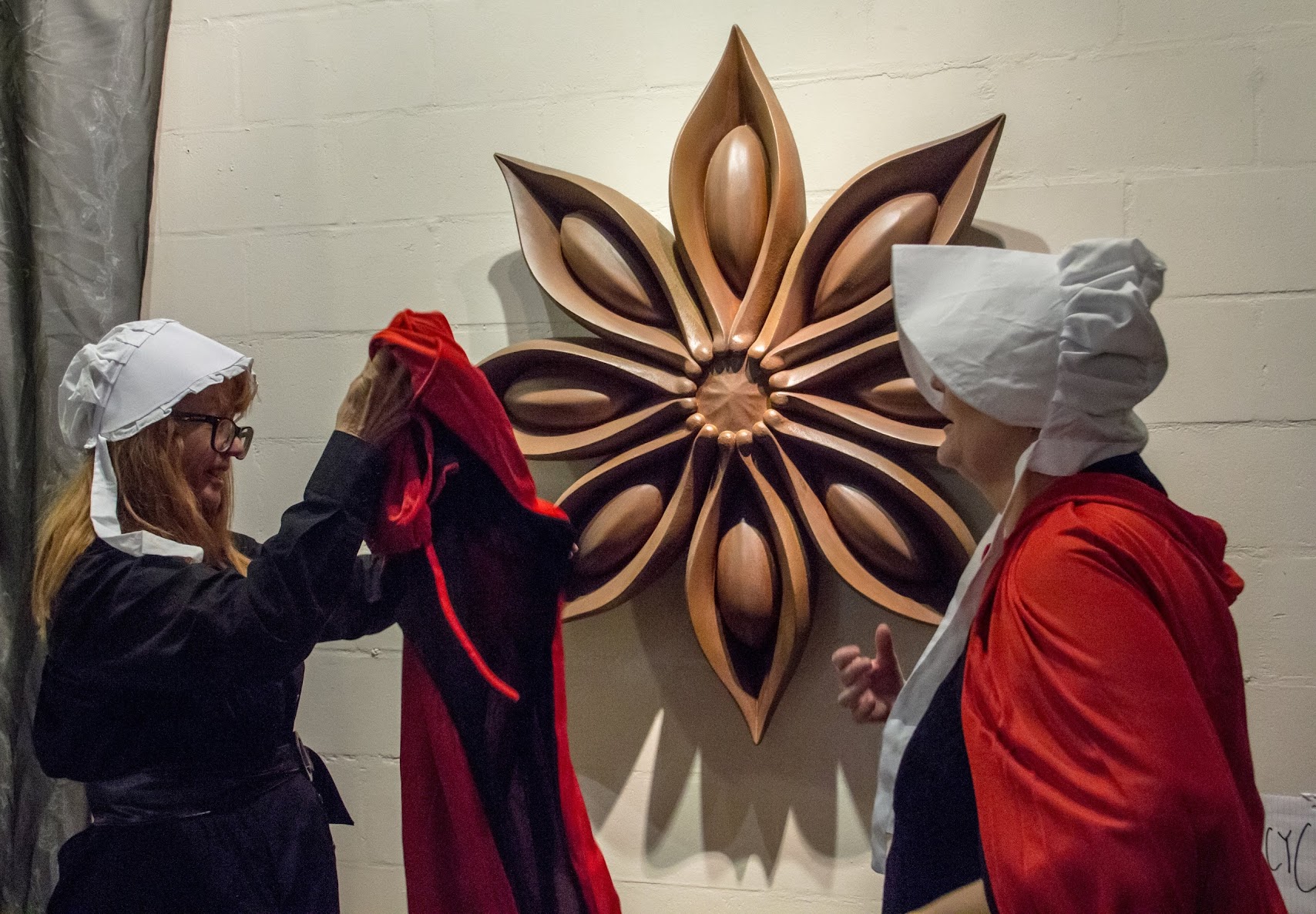 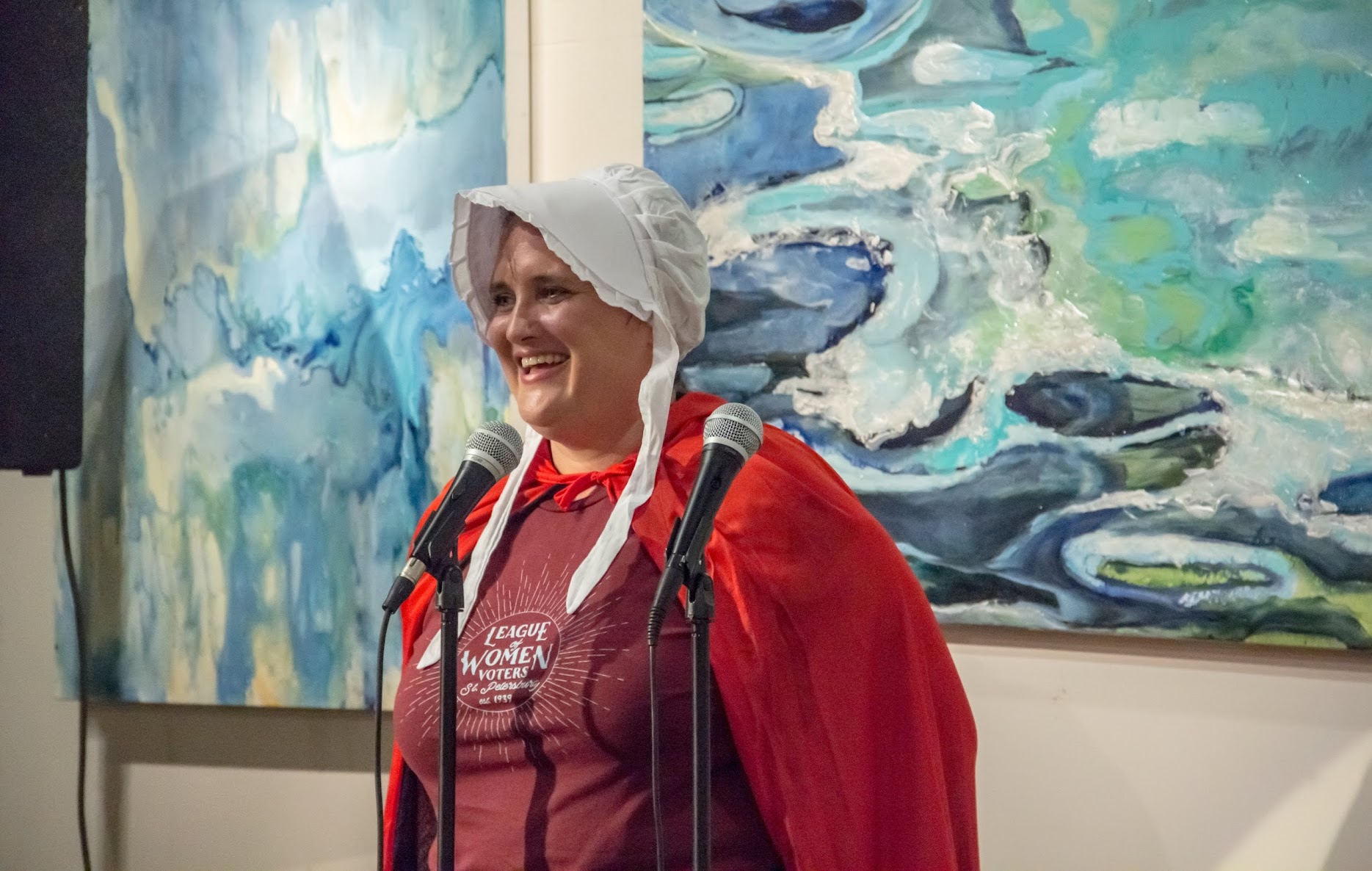 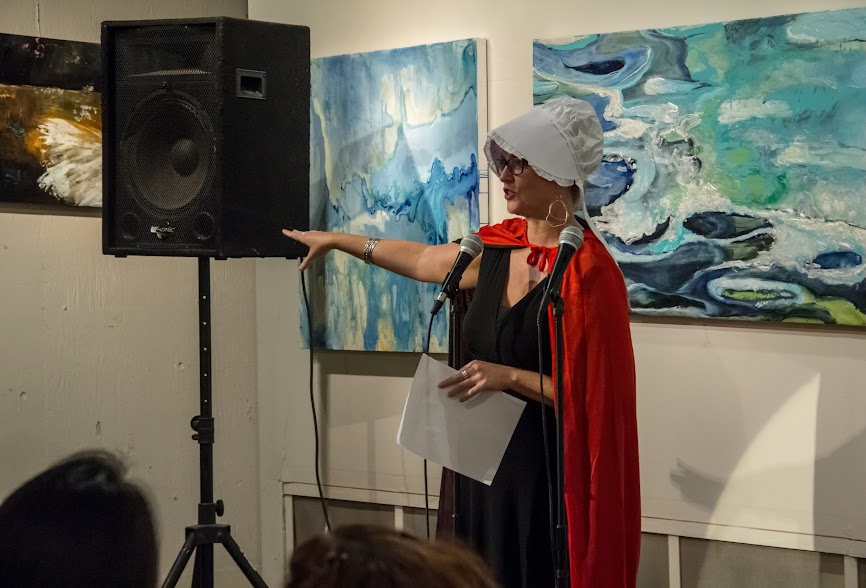 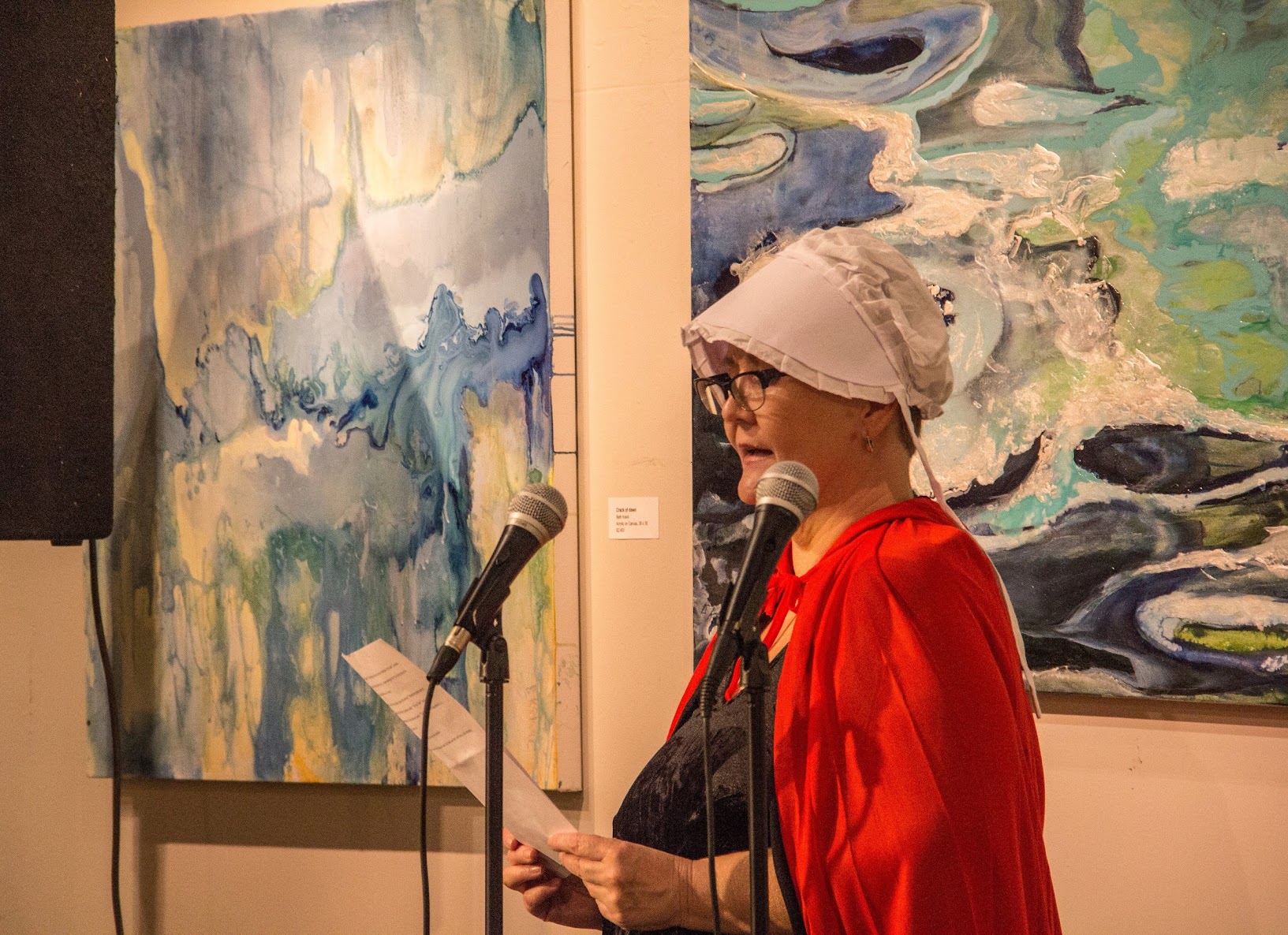 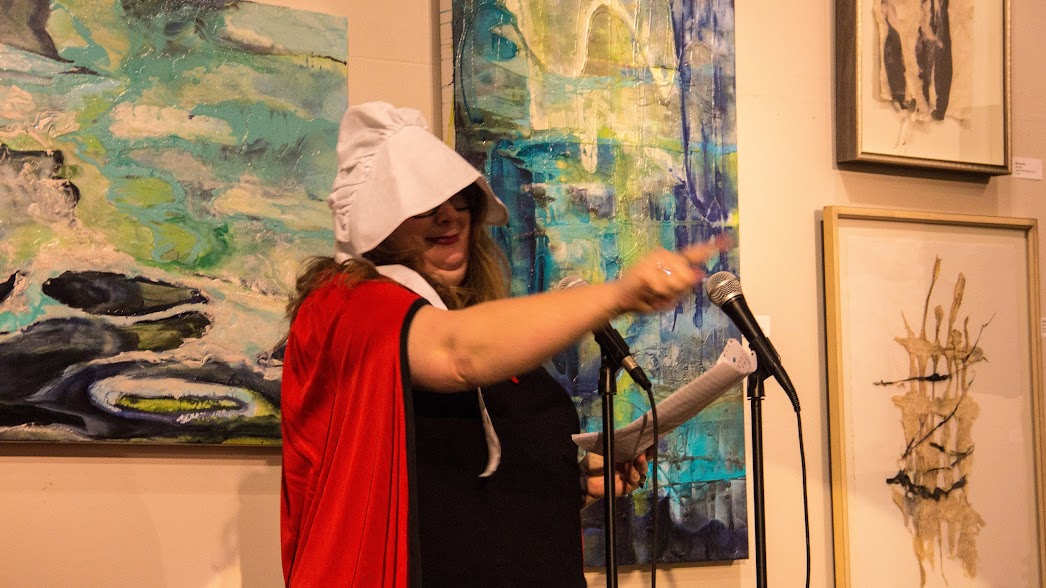 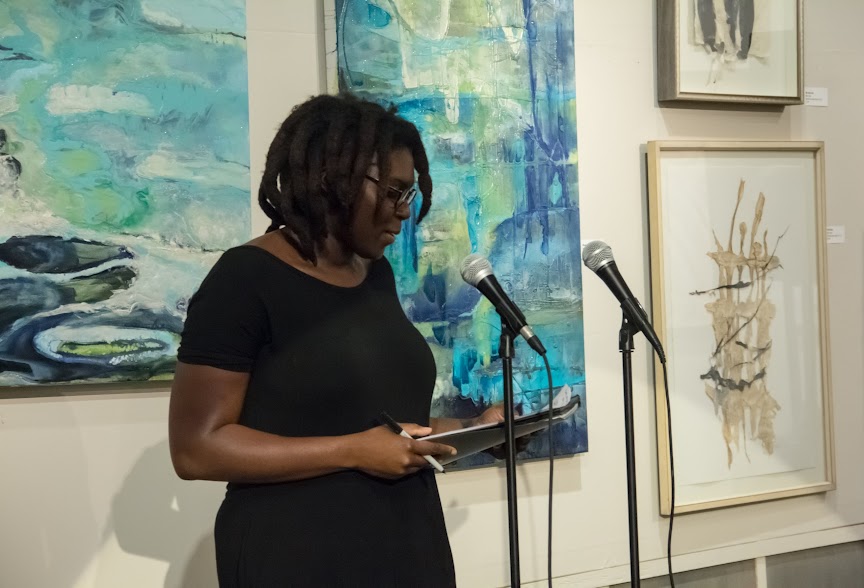 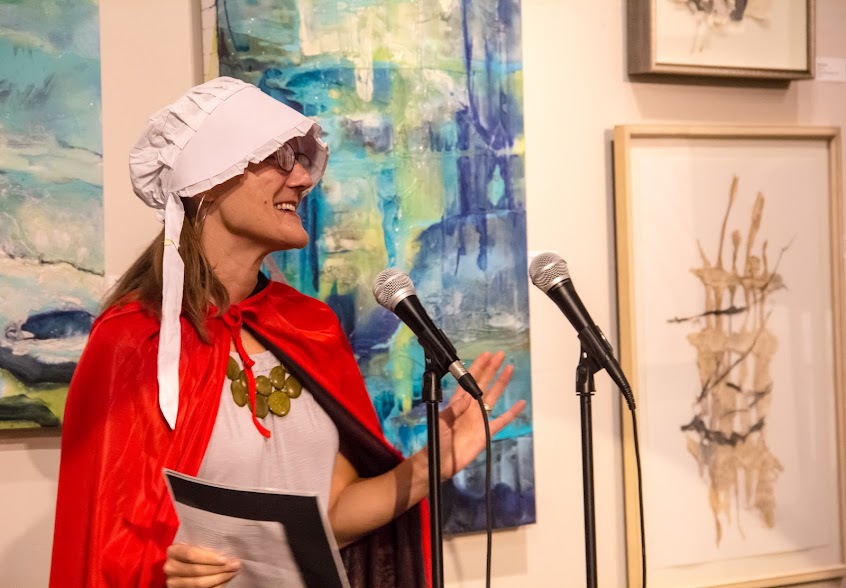 Lenore Myka: “When a good friend told me she was changing her name and it was nothing political, I asked her: Isnäó»t the personal political?” Barbara Poore: “In the end, can we have both freedom to and freedom from at the same time? As yet, I see no answers.” 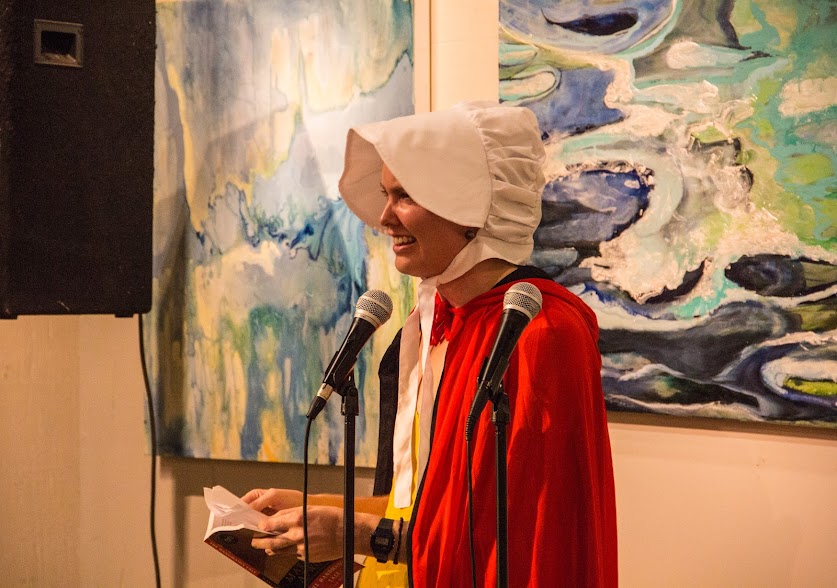 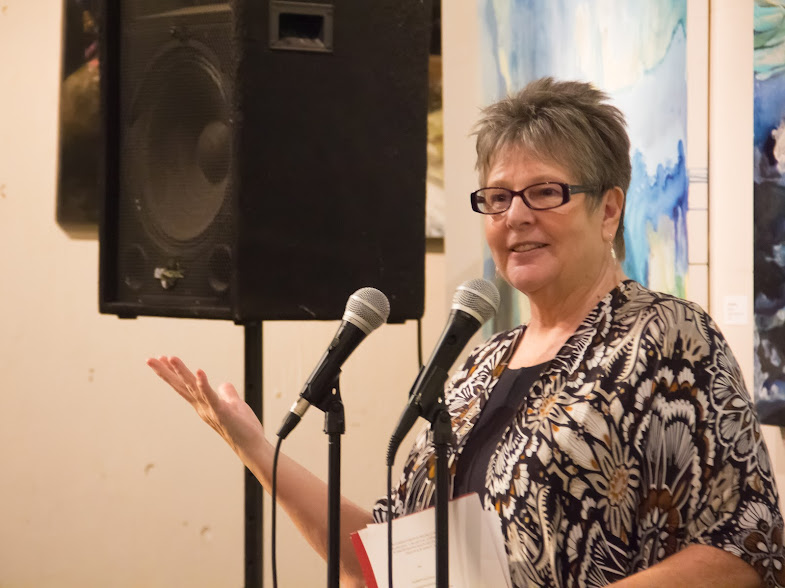 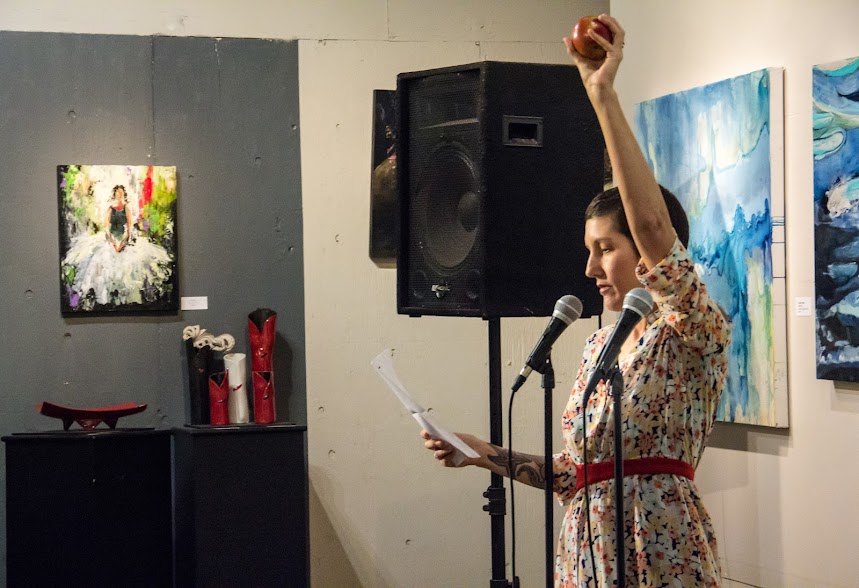 Mitzi Gordon reads her uniquely “Redacted” poem, crafted from words between crossed-out lines of Atwood prose. She raises an apple to signal the audience’s response, “Under his eye.” 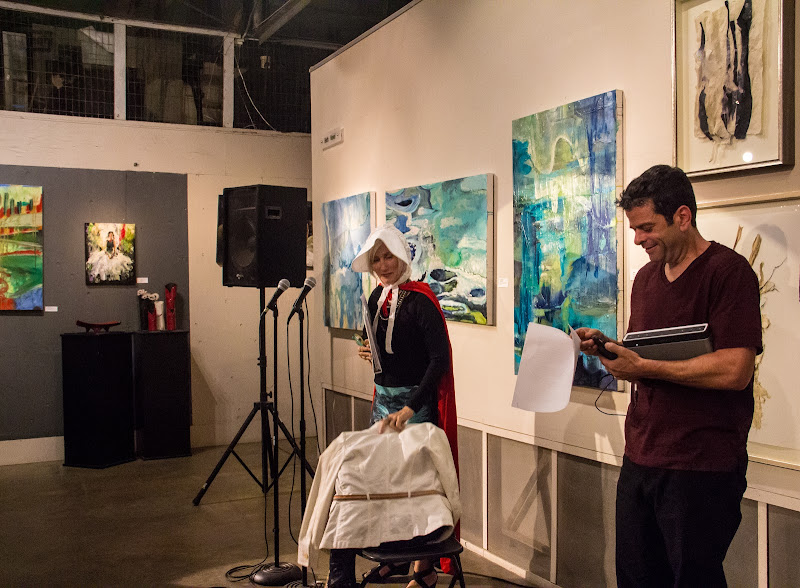 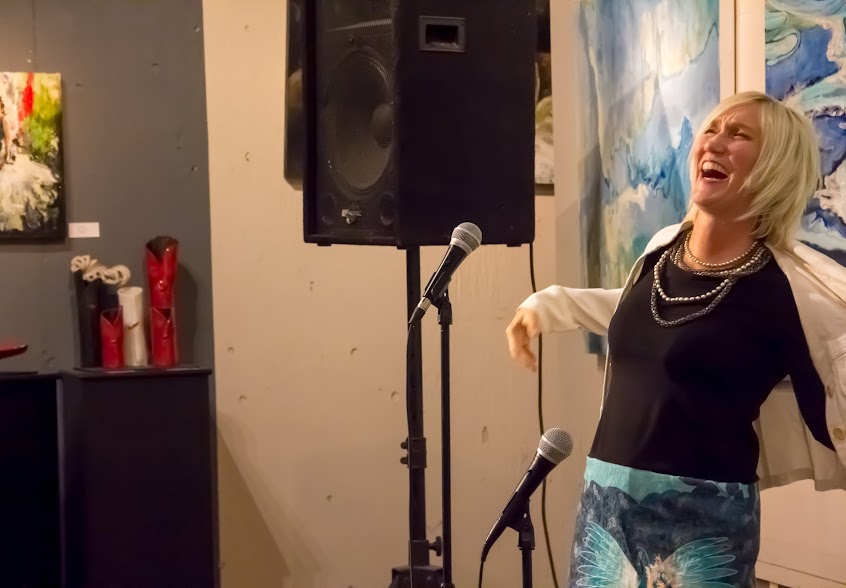 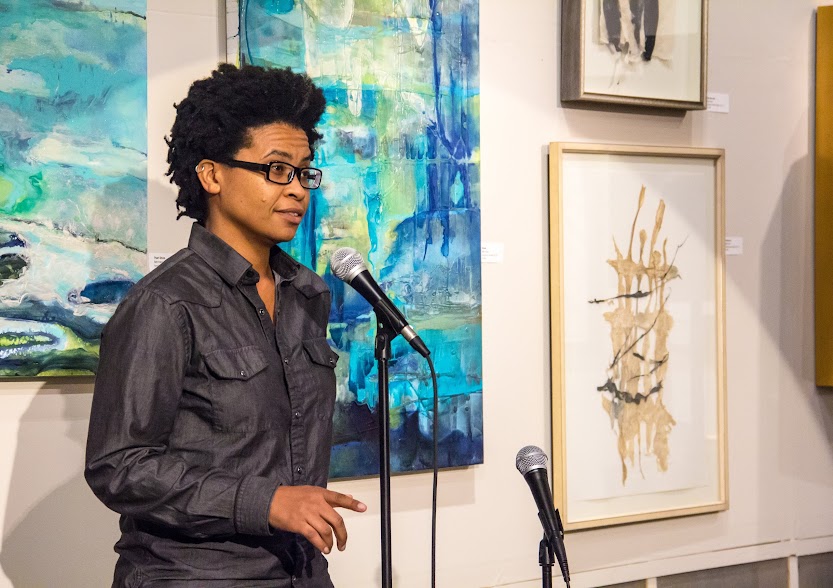 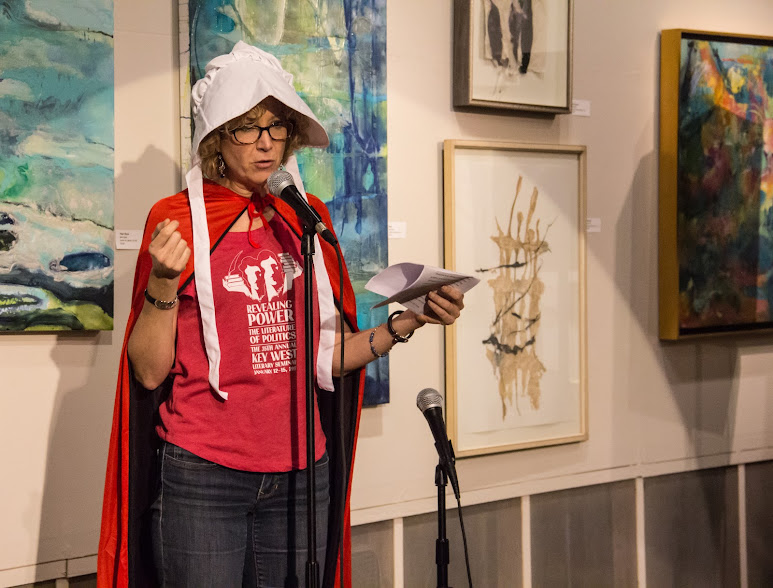 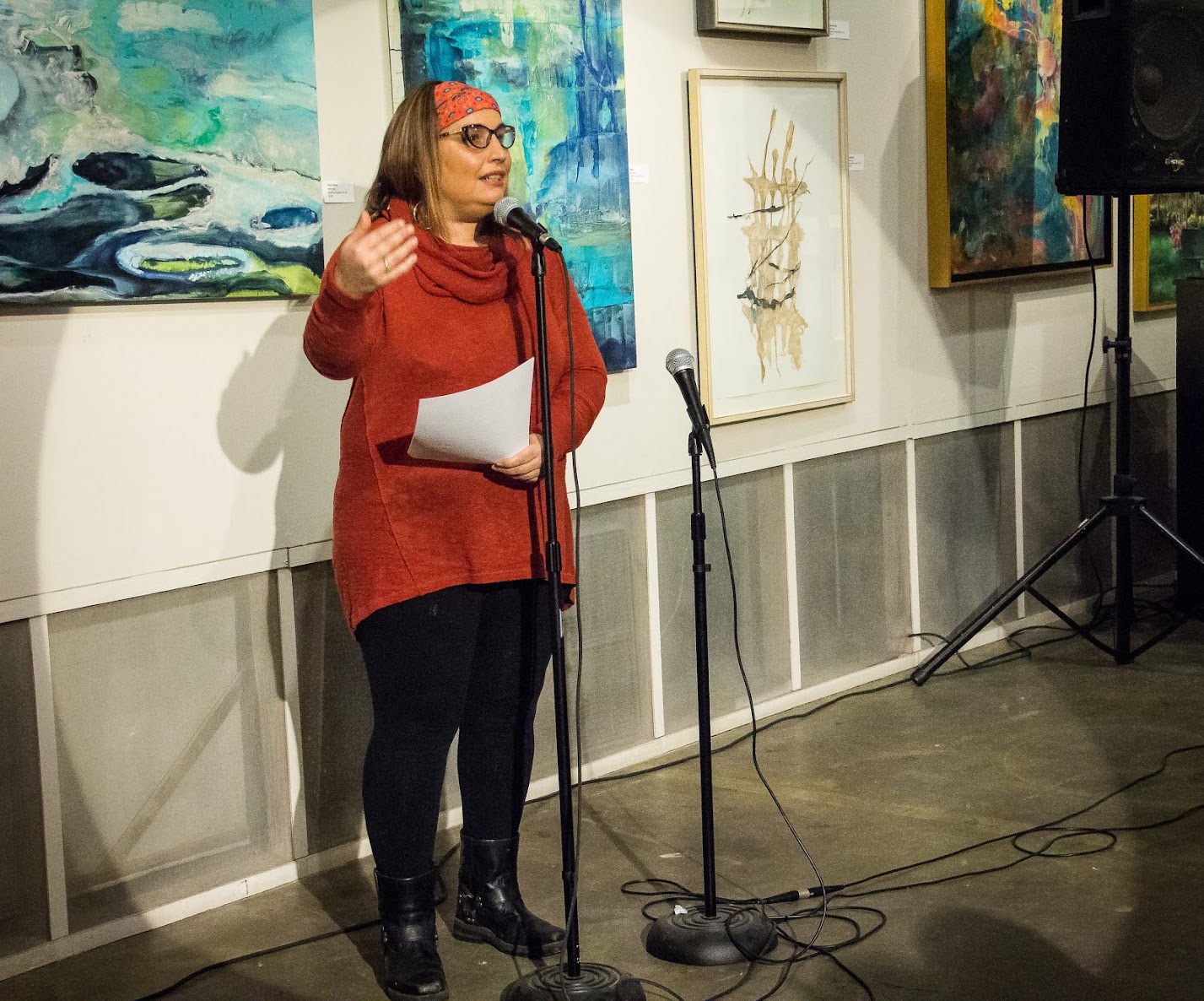 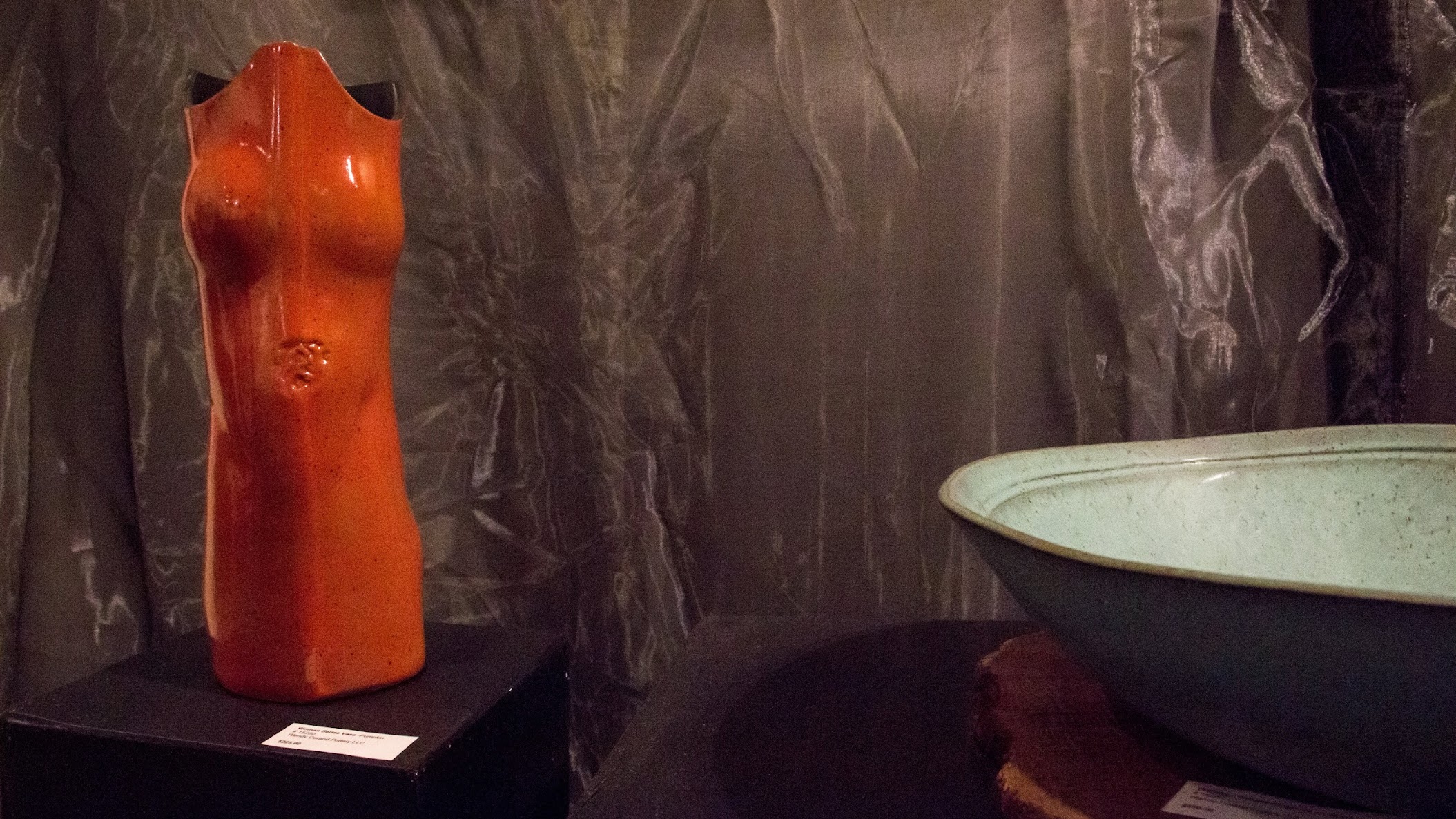 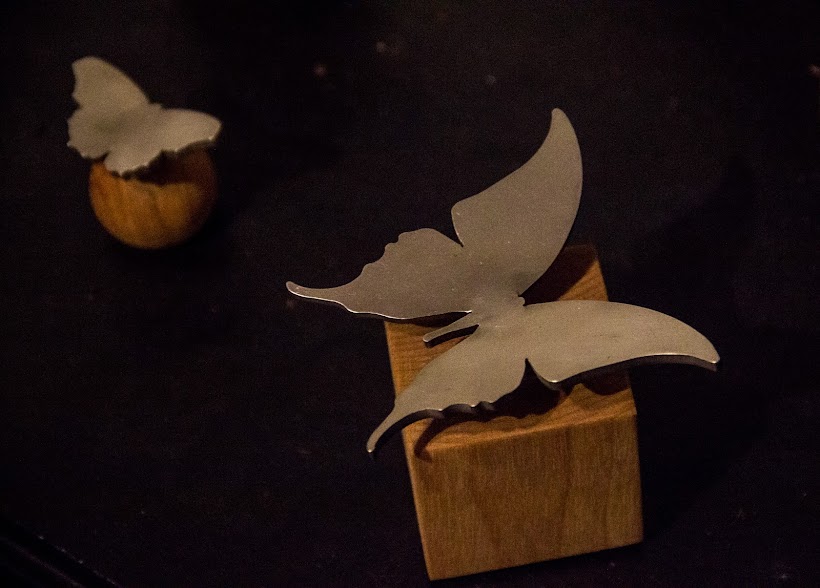 Limited-edition butterflies by Mark Aeling, identical to the ones used in his sculpture, were for sale. 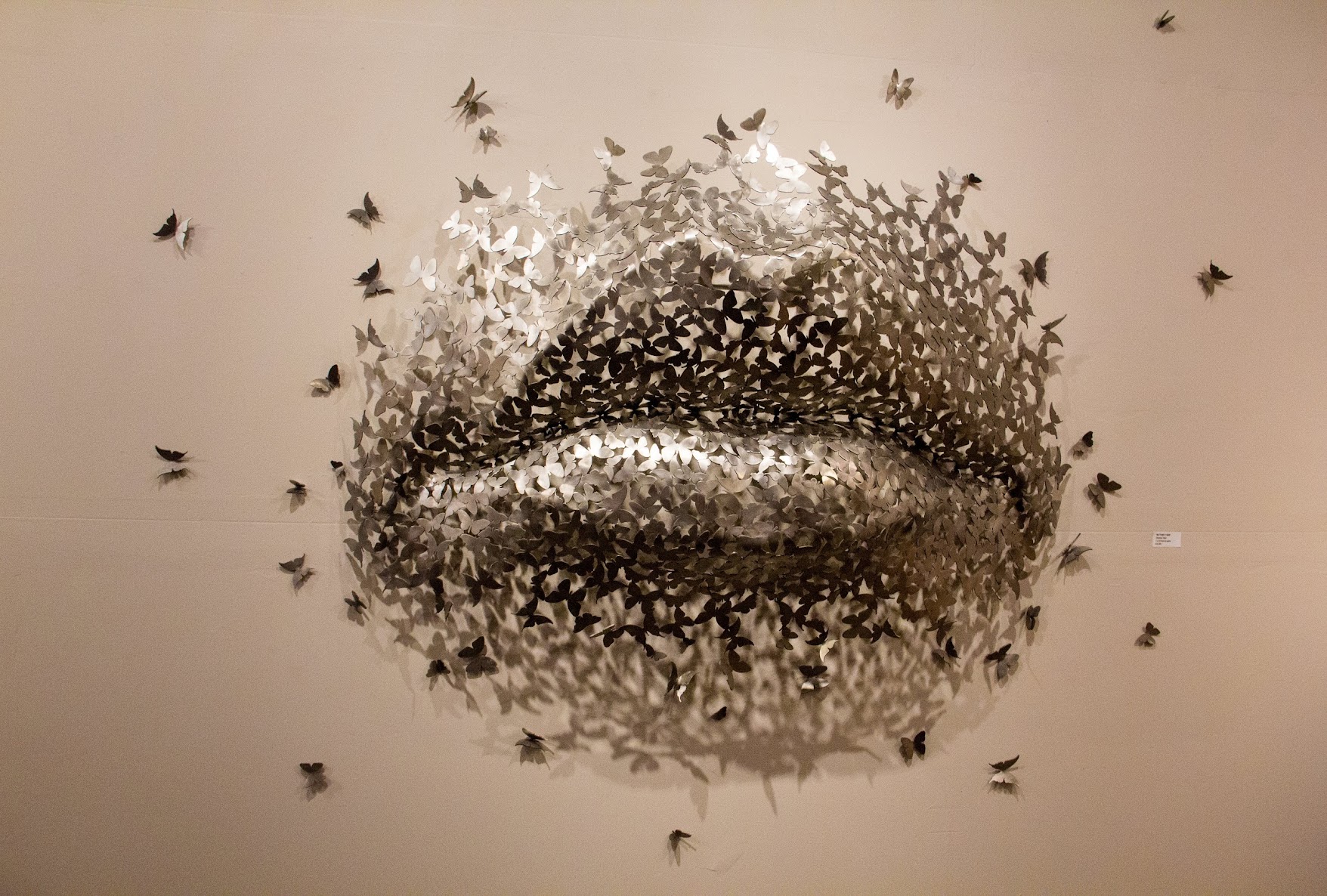 Mark Aeling’s “Butterfly” stole the spotlight during the event reception. Click here to see a time lapse of its creation. 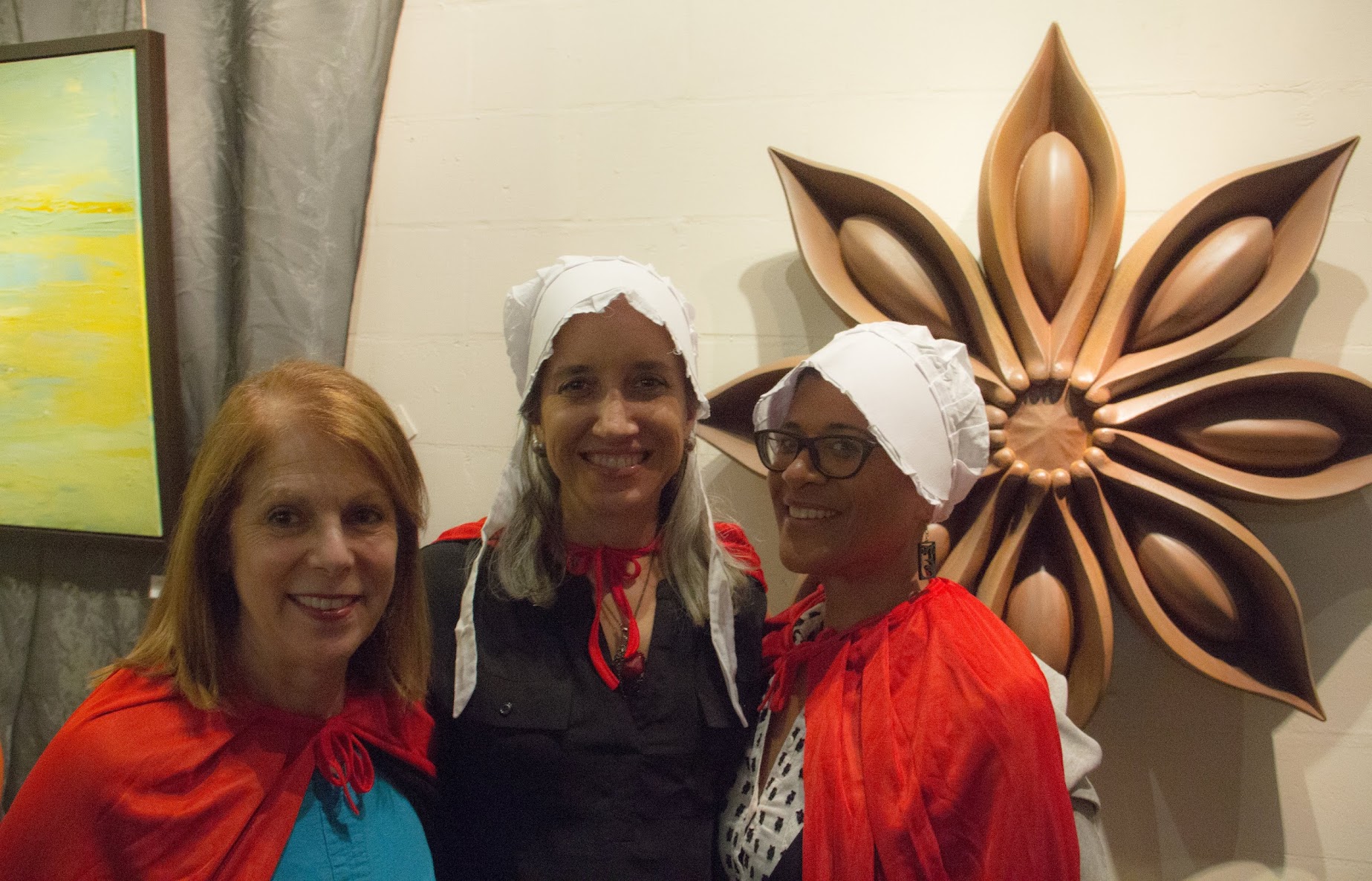