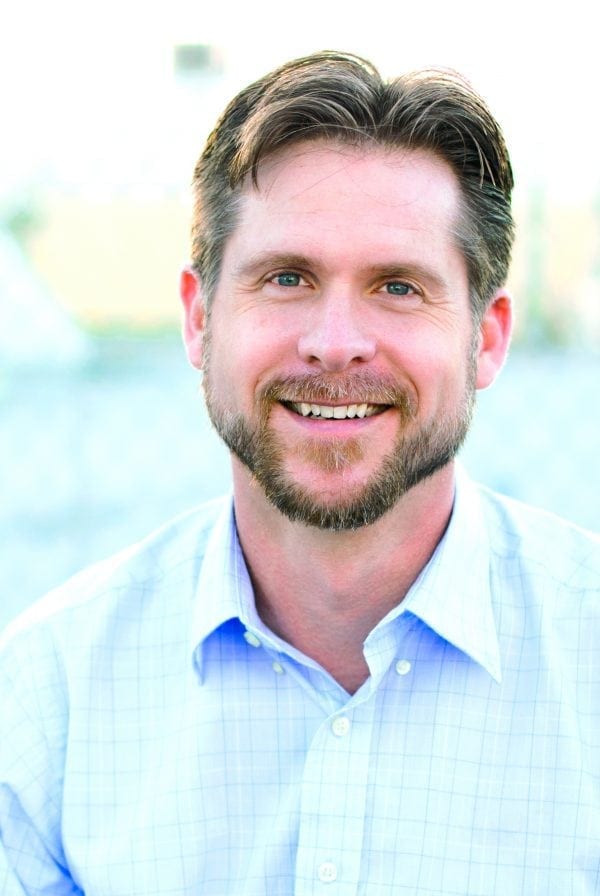 The local theater Renaissance Man talks about what drives his mojo, his directorial debut at American Stage and what he’s got planned for his downtime.

Actor, director and American Stage Operations Manager Jim Sorensen grew up an “Air Force brat,” living in a dozen different houses and attending three different high schools. At the last town his family settled in, in rural Nevada, he tried out for his first play. His versatility and leading man charisma, as well as his dogged work ethic, earned a full-ride academic scholarship to the University of Nevada-Reno, where he received a dual bachelor’s degree in Theatre and Speech Communication.

Sorensen moved to the Bay area in 2010 and helped get freeFall Theatre up and running with Eric Davis and Kevin Lane. Before that, he worked as associate managing director at Florida Studio Theatre. He’s also starred and co-starred in numerous productions. Theatre Tampa Bay awards include Outstanding Supporting Actor for the role of Frances’ dad in The Burnt Part Boys at freeFall and Best Actor honors for Cliff in Cabaret, also at freeFall, and Brad in The Rocky Horror Show at American Stage.

This season he’s making his directorial debut at American Stage with Strait of Gibraltar. In the below email Q&A he talks about the show, his playwright/actor wife, Natalie Symons, what it feels like to be in his mid-40s and, last but not least, his movie and theater plans this weekend and next …

You’re quite versatile in your career — managing, building, designing as well as performing. Did anyone or any particular experience inspire you to be as productive and focused as you’ve been throughout your career?

I only discovered in my sophomore year of college that I really wanted to be an actor, and it was drilled into me that I “needed a backup career.” I don’t know if that was a comment on my on-stage talents, but luckily, I was also terribly interested in most every other aspect of the stage, in particular, set construction. It just so happened, throughout my early career, building sets was a great way to subsidize my income. I accidentally learned project and time management working at The Melodrama Musical Theatre in Bakersfield, California, where I was part of a company that never had a dark weekend – I was in the cast of most shows: performing at night, rehearsing and building sets during the day for the next show, and getting to play with a supremely talented company of actors/directors like freeFall’s Eric Davis. After that, an opportunity opened up to actually run a dinner theatre, The Music of Denali Dinner Theatre at the Denali Princess Wilderness Lodge in Alaska. I spent five years there, enjoying successes and learning from mistakes, but basically getting my 10,000 hours in.

Tell us how old you are and the best and worst part about being your age.

I have reached the age where I actually have to do the math to remember, and I’m still not really sure since I have to remember if I’ve already had the birthday this year or not… 45 sounds right. I’m starting to enjoy naps more 😉

Your wife wrote one of my favorite plays, The Buffalo Kings. To what extent do you collaborate or give input on each other’s projects? I

One of my faves too! When Natalie and I were first dating, she was in rehearsals for the first play she wrote, Lark Eden, and I was scared as heck to see it: Could I continue to date this woman if she turned out to be a bad writer? Luckily, that was NOT the case, not by a long shot.

With The Buffalo Kings, we spent a lot of time reading the scenes out loud to each other and massaging the flow and comedy. Natalie is a collaborator through and through. She’s clear on what she wants, but is very open to listening to other ideas, has no problem scrapping entire sections and/or characters if they’re not serving the story.

You were hilarious in The Producers. Was that show as much of a blast as it was for the audience?

Put a tall man in short lederhosen and combat boots – you can’t help but have hilarity. Matthew McGee and Scott Daniel are two of the most talented entertainers in the area, and the rest of the cast, crew, and design team was just as good. Then add a sure-fire script, and it just doesn’t get much more musical theatre magic than that.

In Strait of Gibraltar, we meet an unlikely couple. How does this play distinguish itself from other stories about star-crossed lovers?

Miriam and Sameer are an excellent yin and yang for each other. She speaks a mile a minute, often letting her thoughts race ahead of her mouth. He is rooted and thoughtful and poetic. Both are young, attractive and driven – an easy match for each other. The challenges to overcome are in the “opposites attract” mold – she is Jewish, he is Muslim (“Cousins” he says…); she is American, he is Moroccan and, come to find out, has overstayed his visa by a couple years. Set directly in the world of TODAY, that poses more of a serious problem than it may have in the time before the Patriot Act, when the government itself steps in to throw obstacles in their path.

Oh, and of course, congrats on your American Stage directorial debut!  Could you share with us your takeaways from the experience?

Thanks! I’m glad to have a chance to exercise the directing muscles again. This show, Strait of Gibraltar, has taken the term collaboration to a new level. It’s a simple script: girl & boy meet, fall in love, overcome challenges. But multiple locations, the inclusion of video, actors playing multiple characters, a work-in-progress script – all of these have offered the team excellent opportunity to put our creative brains to work, and have indeed required it. A new script offers the question: is X line really right? Does it work? Is the actor/director that needs to change, or is it the script? That’s an additional level of complexity added to an already intricate process. Luckily, the playwright, Andrea Lepcio, was more than open to feedback and the script found some beautiful moments of growth and development along the way.

Perhaps my biggest takeaway, though, is the even greater respect I found for the members of our in-house creative team at American Stage: Rachel Harrison’s sound design, Jerid Fox’s projections, Chris Baldwin’s lights – these are artists who are talented enough to work anywhere, and are working here, in St. Petersburg, at the top of their game. And under the overall leadership and artistic direction of Stephanie Gularte, the whole team was a joy to work until the wee hours with. I thanked/bribed them with various bottles of liquor which I’m looking forward to helping them sample 🙂

And, now for the big question: Please tell us about your plans this weekend and next.

I’m a total comic book movie geek, so I can’t wait to see Deadpool 2 and Solo.

But last weekend I got to catch the final performance of The Machine Stops at freeFall – a stunningly executed thought-provoker.

And I’m looking forward to catching Urbanite Theatre’s production of Incognito – those guys always do excellent work, and Jobsite’s Dancing at Lughnasa with a cast of local all-stars.