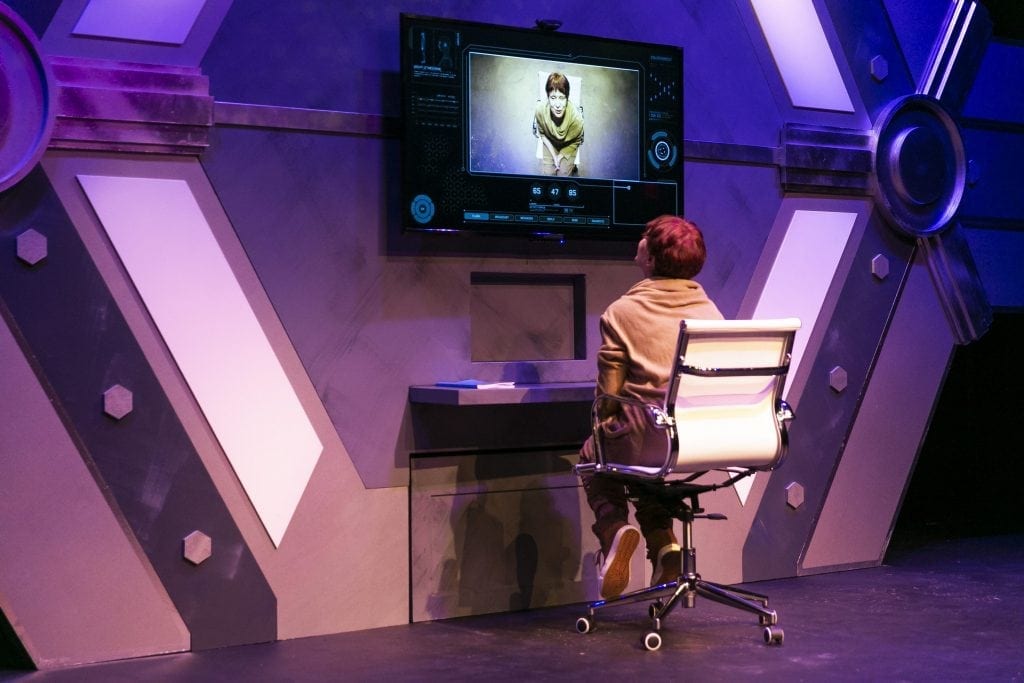 Rage Against The Machine at freeFall

The Machine Stops brings us a historic Tomorrowland with superb performances and a few surprise appearances.

Recent innovations in artificial intelligence are downright unsettling. Imaginings of a technological singularity, of our total annihilation of the natural world, intimacy, privacy and autonomy have inspired an onslaught of dystopian retreads and new dramas, from Ready Player One to Westworld to Black Mirror.

Locally, Tampa Bay’s professional theater companies have tapped into the zeitgeist with some impressive offerings, offering both prescient ideas and timeless substance. The recent Marjorie Prime at American Stage was both gorgeous and gripping. 1984, in production at Jobsite Theater, has gotten kudos across media outlets.

And now we have freeFall Theatre Company’s elaborate and inventive futuristic production The Machine Stops, based on a short story by E.M. Forster, a writer known more for genteel stories, like Howard’s End and Passage to India, than sci-fi explorations. Enhanced by freeFall’s stylish and visually stunning set and video narratives, its plot is chilling and nightmarish. Fortunately for the audience, the story’s bleakness is alleviated by freeFall’s alternative and unique modes of theatrical expression and amusing local actor cameos.

Adapted by freeFall Executive Artistic Director Eric Davis, the play’s director, costume and mulitmedia designer, who has a total of five retoolings of famous works for freeFall including Miss Julie, Peter Pan, The Importance of Being Earnest with Zombies and Peter Pan — The Machine Stops brings to fore a Tomorrowland penned nearly a century ago, a tale with striking similarities to works written several decades later, including The Matrix, Logan’s Run and THX 1138.

Davis reminds us that When Forster wrote The Machine Stops in 1909, television hadn’t even been invented yet. “Sure, there was the cathode ray tube,” he clarifies by phone, “and talkies, radio and telegrams, but Forster predicted technology that didn’t exist until several decades after his time.” He points out that the characters in The Machine Stops original text speak to one another on “blue plates”  — not screens, which weren’t familiar to the public except in nickelodeons.

Both the short story and play follow a mother and son, who along with the rest of their society, live an isolated existence in an underground hive-like dwelling of identical rooms. Vashti (Ann Morrison) and Kuno (Rob Glauz) only interact through the all-knowing, all-seeing, all-purpose interface called “The Machine,”  Vashti is a model citizen and Machine loyalist, but her son Kuno starts to question what exists beyond their well-programmed lives.

Megan Morgan and Adam Kezele are featured in non-speaking roles, performing with aerial silks and Chinese Pole, providing an alternative expression of what exists beyond the machine. Their performances might take you aback at first, but are moving and spectacular. Kudos to choreographer Rose Mallare in guiding the actors to succeed in expressing the human connection and physicality lacking in the automated world of The Machine.

Did Davis add to the script? No, he says. He was able to draw enough compelling dialogue and story that he didn’t embellish anything. Even the term “beyond facts,” which seems ripped from today’s headlines appeared in the short story’s original text. In addition, there’s amusing satire involving a distrust of new information that smacks of today’s “fake news” admonitions.

Both in the story and the play, The Machine is an omnipotent technology that provides everything one could want, eliminating the need to ever leave one’s room — a condition eerily reminiscent of today Internet and social networking addiction.

When we meet Vashti, we learn that she fills her time as an instructor of music from “the Australian Period” — much like the TedEx talks and other lecturers we follow on Youtube. Davis finds a perfect selection of didgeridoo music to accompany her lesson as well as a movement by composer Benjamin Britten, whose libretto for Billy Budd was co-written by Forster. Other musical selections were likewise exquisite and compelling.

A freeFall regular, Morrison imbue Vashti with a spiritedness and endearing vulnerability, and relatable frustrations. The star of Broadway’s Merrily We Roll Along and freeFall’s Into the Woods and Sondheim on Sondheim elicits empathy as a conflicted good citizen with repressed (and sometimes not-so-repressed) frustrations. Rob Glauz (seen in freeFall’s recent The Glass Menagerie) is a believable rebel and likewise sympathetic. I came away wanting more of their dynamic.

The set and nifty Space Mountain-like trappings of the show tend to steal the spotlight from the drama. Lighting and sound designers Tom Hansen and Steve Kraack provide the perfect ominous mood. Technical Director Miguel Lopez helps create the perfect sci-fi ambiance, and Davis’s costumes are fashionably drab too.

Anyone who’s grown up on 1960s-80s sci-fi will appreciate the retro touches and sleek sterility of Vashti’s room, including a stiff, mechanized bed — purchased from what we can only imagine is an Armageddon-era Ikea. Video monitors offer narration of prose straight from Forster’s story, actor cameos (no spoilers!) and retro film reels — all conceived and executed from the Machine himself, Eric Davis.

The Machine Stops runs through May 27, with performances Wednesday through Sunday. Talkbacks after every Friday night performance.

freeFall Foreword: Resident Dramaturg Timothy Saunders will give talks on May 20 and May 27 at 1 p.m. in freeFall’s auditorium. Free and open to all. To purchase tickets, visit freefalltheatre.com or call the box office at 727-498-5205.