Steven Spielberg says he began his film career early, as a twelve-year-old boy scout, using the family’s film camera to fulfill a scout requirement. Then when he was sixteen, he made a short film that inspired his later blockbuster Close Encounters. 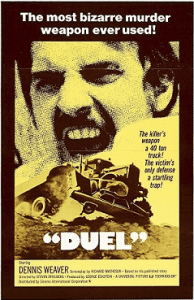 My favorite of his early films was Duel (1971), about a truck with a vendetta that follows a car and traumatizes its owner. I viewed this film when I was in college at the University of Florida as part of my minor degree, Film Criticism (English Department).

This film helped me realize the potential of film to evoke emotion through poignant and creative use of writing and editing.

I always loved movies, and I recall a few of our frequent family events that included screenings of home movies, or travel films from my grandparents trips across America. But I was no early protegé, like Spielberg. At UF, I majored in Broadcast Journalism, where I took documentary classes and watched films with a conscience, like Edward R. Murrow’s wonderful Harvest of Shame about the plight of poor migrant workers in the United States, including many in Florida. While at UF, I produced a documentary about a solar house that the University owned, which was run entirely by solar energy. It has taken 45 years for that film and reality to merge, as solar is only now coming into its own as a fuel source to power our homes.

It would be another eleven years of working in television stations, in news and production departments, before I had the chance to create a documentary film of my own. I worked at WTOG, the independent station (cable non-network station) where the station news operation produced a monthly documentary. There, I wrote Bay Bottom News, a documentary about the loss of seagrass from the bottom of Tampa Bay. It was widely watched, and while it was surely not the only force behind an environmental movement to save a grossly polluted body of water, it may have been the impetus behind hundreds of people who began to plant seagrasses in Tampa Bay as community projects, either through schools or nonprofit groups. I believe that my film inspired them to do the only thing they themselves could do as individuals to help save Tampa Bay. They would plant sea grasses, one by one by one. Today, miraculously, their care and concern and the efforts by scientists and environmentalists to make a change, has worked. The sea grasses in Tampa Bay have surpassed the percentages first documented in the 1950s. The bay is a great success story.

After Bay Bottom Blues, I realized the incredible power of broadcast television to reach the public, enabling me to become a change-maker with more films that I produced. Now that power has become available to anyone with an iphone and a Facebook or Youtube account.

I’m looking forward to chatting with the potential change-makers who attend the Conversations in Art and Innovation lecture series sponsored by Creative Pinellas, this Thursday, May 17.