Victoria Jorgensen
on Filmmaking both Analog and Digital,
and the Wild Early Days of USF

You can hear this whole conversation
on Arts In, the Creative Pinellas podcast
here 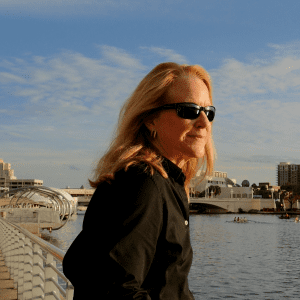 On deciding to she wanted to make films after seeing Luis Bunuel’s Un Chien Andalou in Margaret Miller’s (now head of USF’s Graphicstudio) beginning art class at USF in the late 1970s. . .

“So I marched down, in my little red Prussian wool jacket and my and my Frye boots with my jeans stuffed in and went to the department head and said, ‘I want to do this.’ And he said, well, that’s nice, honey. But you can’t because it’s graduate level and you know, you’re in Art 101. And I said, ‘Well, okay, I’m gonna sit here until you let me do it.’ And I did. And he did.”

“At that time, USF was so new they just handed us equipment and said go shoot something, basically. It was more philosophical than it was technical. So you had to figure the technical out by yourself. . .  I think University of South Florida at that time was so raw and so interesting, and there were so many people passing through. . .  there was just a lot of amazing energy.”

“You had to share everything, and stay up all night and get terrible coffee out of the machine. Or use instant coffee with the hot water from the bathroom. It was just a wild time.”

“There were two methods. One, on your workprint, you would usually use the guillotine and tape. And then on your final, when you conformed, which, you know, you had to practically be naked with white gloves on and your hair in a net, so you wouldn’t get the film dirty. But then you would actually scrape the film emulsion off and use acetone to seal the plastic parts together. And it was a totally different experience, especially viewing it through a small viewer and looking at the actual film go across. It did something really strange with your depth of field, looking at the actual film and then looking at the image. It was great.” 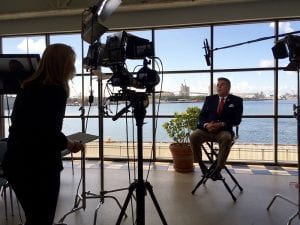 Victoria Jorgensen works in both narrative and documentary films.

“In a narrative, it should be something that comes from the basement of [the audience’s] being. That’s something they experience that is familiar, but yet, you can’t remember where it came from. It’s almost like a memory.”

“And with a documentary, it’s pointing out sometimes really basic things that when we go throughout life, we don’t notice things, whether they be objects or they be trees or birds. And whatever we focus on is almost like the depth of field, of the lens. So if I can bring things to light – ideas, or any type of thing that somebody hasn’t considered or taken a moment to look at before – then that’s my job.”

“The audience, that is the key to everything, of course.
I mean, you can create all day, and unless somebody watches it?
For me, even if one person is changed, and their point of view is changed, that’s worth it.”