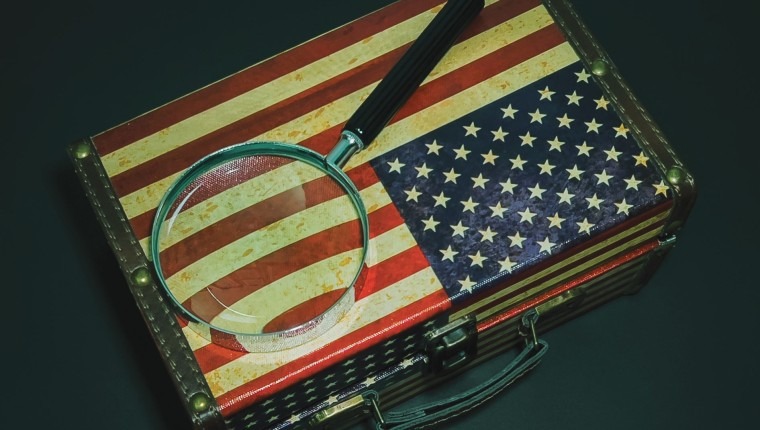 . . .
Through Our Lens is an exhibition of 47 photographs created by 16 military veterans and their families who participated in the USF Contemporary Art Museum’s 2022 Breaking Barriers photography workshops.

“Pepper is a bit of a strange dog at times. More feline than dog. Imperious at times, and proud as any aristocrat. She wasn’t raised like that. Luna, our older dog that helped raise her was as pure a lap dog as a 65-pound mutt could be. Pepper is a bit different, though, we’re unsure how Pepper deviated so much from Luna.

“Despite that, she is almost as good a dog as you could want. She is a close companion, loyal, intelligent and a good judge of moods.

“While getting in the frame of mind to take a series of photographs, I called Pepper over and patted the chair to get her to climb into it. It was like she knew what I was looking for and instantly assumed this pose. After taking this picture and maybe two or three others, I didn’t need to do anything else. I had all the photos I had hoped for that day.”

The beginning workshop, Seeing Like a Camera, Working Like an Artist, focused on close looking and “seeing like an artist” while the advanced workshop, Out of the Box—New Ways of Seeing and Making Photographs, went a step further and focused on creating photographs that give the viewer pause and offer new ways of seeing, understanding and expression.

Through Our Lens is a curated selection of photographs from both workshops that express notions of seeing through personal interpretations.

“These days, people don’t stop and think about details. Our lives are busy, things happen fast, and we don’t have time to stop and pay attention to details. We miss the curves in objects, the lines in faces made by years of experience, the color of skin, or the multitude of colors within water.

“I was this person until I became legally blind and lost my central vision. The ability to see details was forever gone and I was left with a circle of fog that cleared only when objects were two feet in front of me. This is when I realized how important details are. Without details, the comprehension of people and of things is incomplete. I missed details and then I needed them. It was in the missing and needing that I began to see the world around me change.

“A Sea of Nothing is all about details, yet there are not many to see. During a recent vacation, I was exploring our cruise ship docked in Jamaica. I was happy observing and taking pictures of everything. I noticed the hot tubs, and once vacated, decided it was the ideal moment to enjoy them. My husband was in one tub, I was in the other. I watched him soak, arms crossed behind his head.

“He was relaxed and I asked, ‘what are you thinking about?’ He replied ‘nothing.’ My mind exploded with thoughts – did he not see all of what I saw? I jumped out of my pool, grabbed my cellphone and started photographing. The more images I took, the more I saw. We began talking about the flags and water below and yet, I doubt he paid attention to the details.

“Sometimes I feel sad, that we take so many things for granted. We miss opportunities to enjoy the beauty our world offers. I tell my family and friends ‘that’s so beautiful, and I bet through your eyes it’s even more beautiful.’ In response, I get a smile or a nod, knowing they don’t understand.

“Photography has become my second pair of eyes. I can enlarge the pictures and see details overlooked by others. I am blessed because I can enjoy those details for myself.”

. . .
Both workshops were conducted virtually, and each artist created images with their own cellphone cameras. These original and inventive images tell stories about place, express ideas, and convey experiences perceived through the personal perspective of each artist.

Through Our Lens presents these intimate and individual voices to both the local and larger civilian and veteran communities.

“Growing up, my parents would take me to Lowry Park Zoo in Tampa. In front of the park was an old steam engine with its coal tender. It was painted black, its metal rusting, and it probably wouldn’t pass a modern child safety inspection. I can’t tell you how many hours I spent climbing all over that old train. One day, we went to the park and the city had planted hedges around the train to keep kids off, but it didn’t work. I took it as a challenge, dug my way through those hedges, and climbed aboard. In my mind that train was a ride to adventure.

“Over time, the park was overhauled, and the train disappeared. I grew up and it fell away from my memory. I joined the Air Force, moved away from Tampa, and traveled around the world. I got married, went to war, and made a family of my own.

“After retiring from the Service, I eventually moved back to the Tampa Bay area, settling in Wesley Chapel. There are only a couple of main roads back and forth to Tampa; one day I found myself traveling on US 301. To my surprise, there was an old steam engine with its coal tender on the side of the road. It looked a lot like the train I played on as a kid. I thought, ‘That can’t be the same train. Can it?’ It is yellow with red highlights. But that smokestack… and that star on the front… it looks so familiar.

“Biography-brotherly-spend is one of many pictures I took while in the 2022 Breaking Barriers workshop. I don’t know for certain that it is the same train from my youth, but I think the chances are very good that it is. The city sold off most of the old vehicles that were in and around Lowry Park when it was remodeled. Biography-brotherly-spend is a location code used with the app ‘what3words’, yet the locations don’t have specific addresses. Regardless, the train is part of my own biography, and perhaps an object that was an aid to adventure from my childhood lives on.

. . .
Veterans face many challenges related to war and deployment. As a result of their service, many veterans cope with physical and often invisible conditions, which affect not only service members but also their spouses, children, extended families and friends. Civilian life can also pose challenges to veterans returning home or newly retired.

It can be difficult to find words to articulate these hidden conditions and express internal thoughts and feelings which escape everyday language. Breaking Barriers offers participants an opportunity to communicate visually and develop an individual voice through artmaking.

I would like to thank the 16 photographers represented in this catalogue for their bravery in service but also for their bravery in undertaking a new creative endeavor. I deeply admire their courage to move outside of their talents and undertake something new. It is nothing short of heroic to plunge into the art world, and to learn a visual language while being both behind and sometimes in front of the lens.

– Leslie Elsasser, from the exhibition catalog

“Life in Ten Photographs: Number Eight is one picture in a series of ten photographic narratives that document the life of my friend Al. I see Al several days a week to help him with exercises, accompany him to appointments and activities, or take him out to the park or to his favorite lunch spot. This photograph depicts him using his walker to steadily move down the hall to his room in an assisted living facility — ‘The Igloo,’ as he calls it — at the end of a very full day.

“This arduous walk, and his reflection in the hallway mirror, shows his strength as well as his weakness after a long day of getting in and out of my car, sitting in a doctor’s office waiting room, and enduring a monthly medical procedure. This picture represents the most physically draining part of his day and yet this smart, witty and kindhearted 96-year-old man is still in good spirits as he insists on walking to his room and not relinquishing control to a wheelchair.

“This narrative series began as I took photographs to send to his family so they could see his progress after an extended stay in the hospital. The series Life in Ten Photographs ultimately became a ten-photograph series that captured the essence of a day in the life of a ‘young man’ (which is how I greet him each day) who must resign himself to being 96.

“This photograph, as well as the other nine in the series, should not only be viewed as indicative of the life of a person older than ourselves, but should be a reminder to all of us that while we may feel young at heart, each day we grow older and may catch a glimpse of ourselves in the mirror and wonder why the person looking back is not who we expected to see.

You can view the exhibition online here.

You’ll see a list of artist’s names at the top of every page –
click on any artist’s name, then scroll past the list
to view photos and read that artist’s statement.