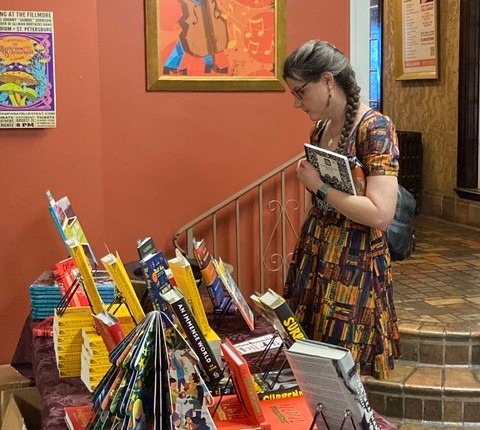 Story and Photos by Margo Hammond
. . .

Turning 30, the Times Festival of Reading slimmed down this year. There were fewer authors. The venue was smaller. And it was no longer free. But two essential ingredients stayed the same – inspiring authors and enthusiastic readers.

Fifteen authors took to the stage of the 800-seat theater at The Palladium in downtown St. Pete for author talks and panel discussions from 9 to 5 on Saturday, November 12. Festivalgoers paid $25 for general admission or $50 for a VIP badge, which provided preferred seating, access to a morning coffee hour, two tickets for drinks at an evening Happy Hour and a 15 percent discount on books. Book sales and book signings were set up downstairs in the Side Door Cafe by Tombolo Books, a local independent bookstore.

Perhaps because of the admission fee, the crowd skewed decidedly older. “I remember when the festival was a two-day affair at Eckerd,” one silver-haired woman said as she checked in. “They had really big authors back then, like David McCullough.” Her companion, however, said she didn’t miss all the walking that she had to do when it was held on the campuses — the festival moved from the Eckerd College campus to University of South Florida St. Petersburg in 2005. “It’s easier now that everything is concentrated in one place.” Perhaps the age of the audience also explains why the afternoon talks drew the largest crowds. The day began with an interview with Barbara C. Cruz, Jeff Houck and Andrew T. Huse, co-authors of Cuban Sandwich: A History in Layers  by Times book critic Colette Bancroft who as a self-described “Tampa girl” admits she favors that city’s version of the famed food. As the authors pointed out, however, the real story of the Cuban sandwich is complicated.

The next talk was a more sobering discussion between Pulitzer Prize-winning journalist Lane Degregory and Beth Macy about the nation’s ongoing opioid problem. In her latest book on the crisis, Raising Lazarus: Hope, Justice, and the Future of America’s Overdose Crisis, Macy looks at both the victims of the still unsolved epidemic and those who have helped, not demonized, those victims.

Macy calls those heroes “stone-rollers.” Her title, she explained, was not named for Narcan, the so-called Lazarus drug that has brought addicts back from the brink of death, but refers to Jesus’ command to his followers in the New Testament to roll away the stone from Lazarus’ tomb – a call to the community, says Macy, to “do the stinky, messy work” to combat the crisis.

After lunch three books were presented — by a novelist, a journalist and an historian — that all touched on same subject:  race. Dennis Lehane, Charlayne Hunter-Gault and Peniel E. Joseph each provided a different perspective on that ever-elusive conversation that we all keep calling for but never manage to pull off having. Here at least, was a start, I thought.

Racial violence is at the heart of Dennis Lehane’s upcoming novel Small Mercies. The book, he said, was inspired by the rage he felt as a 9-year-old living in Dorchester, Massachusetts in 1974 when he found himself surrounded by racists, many of whom were his own family members. The 9-year-old Lehane isn’t a character in the book but “Southie,” the tough Irish-American Boston neighborhood where he grew up, and the violence that exploded during the long, belated desegregation of his schools, are.

Small Mercies, Lehane’s 14th novel and the first in five years, won’t be available until April 25. “Oh, great,” he quipped to Bancroft who was interviewing him. “We’re getting everyone psyched about a book they can’t read for six months.”

TV viewers, however, can watch his Apple TV+ crime drama mini-series Black Bird starring Greg Kinnear, Bancroft pointed out, and pre-order a signed book from Tombolo Books. Lehane is an Eckerd College alum and co-founder of Writers in Paradise, a writer’s conference held on that campus every January.

Journalist Charlayne Hunter-Gault’s new book, My People, is a collection of five decades of her reportage and commentary on Black lives. Two of the pieces in the collection are about South Africa’s Nelson Mandela – her interview with him in 1990 when the anti-apartheid activist first was released after 27 years in prison and his funeral in 2013.

In that first interview, she said, by responding yes to Mandela’s question, “Did she known Maya Angelou?” (she really only knew of her from her work), she got her “scoop.” Mandela told her that he had read all of Angelou’s work while in prison.

At 18 Hunter-Gault was one of two Black students to integrate the University of Georgia. Three days later a riot broke out in front of her dorm. In a question-and-answer session, an audience member asked her if she thought the United States needed a truth and reconciliation commission like the one promoted in South Africa by Desmond Tutu. Ever the journalist, she turned the question back on her questioner, asking him what he thought that process should look like here. Reparations in some form, he responded, but above all truth-telling.

The need to confront the truth about America’s racial past was forcefully addressed during the talk by Peniel Joseph, author The Third Reconstruction. Joseph was interviewed by fellow historian, retired USFSP professor Ray Arsenault, author of Freedom Riders, which describes a pivotal moment of the Civil Rights Movement, a period often referred to as the nation’s “Second Reconstruction.”

The term “Third Reconstruction,” explained Joseph, has been employed by a number of historians and social justice activists, including William J. Barber (whose book with the same title came out in 2016) to describe the latest attempts to correct civil and human rights abuses that have lingered since the First Reconstruction after Civil War failed. Joseph’s book defines the Third Reconstruction as the period from 2008 to the present, from the election of Barack Obama to the rise of the Black Lives Matter movement.

“Since 1865 the United States has been locked in two different competing stories. One of the stories is a reconstructionist story that supports multi-racial democracy… and multi-racial justice for all people… not just Black, white but Latino, Asian-Americans, Indigenous folks, queer folks, the whole range,” said Joseph who himself was raised in a segregated area of New York City by Haitian immigrants.

Festivalgoers were obviously interested in continuing the conversation about race started by these authors. Joseph’s book signing line was the longest of the day.

The most ubiquitous subject at the festival, however, was Florida. Florida-based authors and Florida topics dominated the roster. New York Times bestselling author Lisa Unger, who lives on the Pinellas coast, talked about her latest psychological thriller — her 20th. Even the title sends chills down your spine, Secluded Cabin Sleeps Six.

Two Florida-based historians were paired up in another session – Gary Mormino (Dreams in the New Century: Instant Cities, Shattered Hopes, and Florida’s Turning Point) and University of Florida professor Jack E. Davis (The Bald Eagle) who specializes in environmental history.

“What made you want to become an historian?” Bancroft asked the historians. “I wanted to become a writer,” Davis admitted, a bit sheepishly. “When you write history, you get to tell stories.” Historians, Mormino agreed, are “the best writers in the academy today. They are writing stories — stories with a purpose.” They are also writing stories with characters that can carry the narrative in books that borrow some of the same techniques as fiction writers to keep readers interested, Bancroft pointed out.

“If you can’t find characters in Florida,” laughed Mormino, who specializes in Florida history, “you need to give up writing.”

And as if to prove that point, three Florida-based authors, appearing together on a panel, regaled us with the tales of some pretty interesting characters they encountered while writing their books, all of which embrace the weirdness of the Sunshine State. . .

Wilborn was not only a featured author at the festival, as the executive director of The Palladium Theater, he was also the host. “I’ve been a fan of this festival since it was at Eckerd College and I followed it to USF and I was worried that it might not come back after COVID, so when (the Times) reached out and thought the Palladium might be a spot, I said, ‘Absolutely how can we make it happen?’” he said.

“So far we’ve heard good reports from the fans. I hope they come back.”