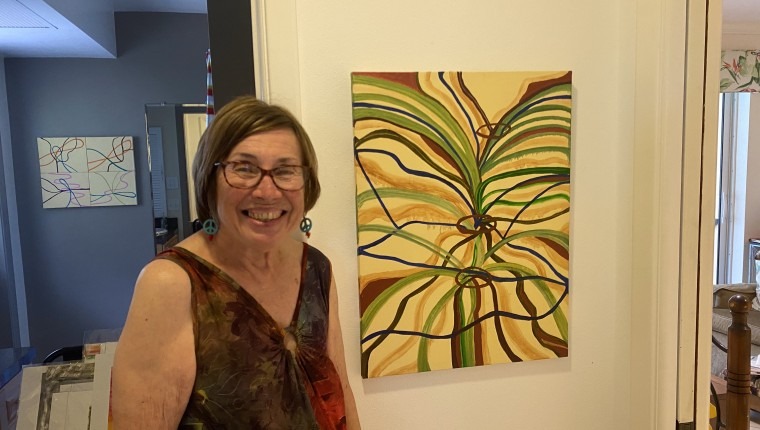 The Story of Theo Tamborlane

An Abstract Artist In a Concrete World

The New Jersey-born and Dunedin-based visual artist is renowned in the art world with collections displayed in Japan, The Netherlands, New York and Florida, and international accolades, but she did not start as an artist.

Tamborlane’s professional art career developed 17 years ago while working as an attorney in New Jersey. Making a name for herself in the legal world, Tamborlane attributes herself as “one of the first women to head up a law firm in New Jersey that was not devoted to marriage and divorce law.” Instead, she served at a law firm focused on corporate law, health law and employment law.

While living in Cranford NJ, Tamborlane’s husband took a job as a government administrator in Key West, Florida. Tamborlane and her husband made the joint decision to reside in both areas, and make appropriate commutes on the weekends.
. . .

. . .
Although Tamborlane occupied herself as a full-time attorney, she admitted she frequently found boredom. To combat this, she perused options at the local community college. According to Tamborlane, the Cranford community college offered free classes to those over 50.

“It occurred to me I didn’t want to just keep doing law and I needed another diversion,” Tamborlane says. “I thought, what the heck? Why not take a drawing class? ‘Cause my mother, years before did do some minor drawing. Nothing more than some flowers or some ducks here and there as I was growing up.”

Tamborlane enrolled in a drawing, painting and pastel class at the local college. Shortly thereafter, three semesters to be exact, her professor discouraged her to re-enroll due to her overwhelming talent.

. . .
Becoming enraptured and involved in the art community, Tamborlane found herself thinly sliced between law and the art world.

“Ultimately, I just had to sit down and look at things. [I] decided that after 30 years of being an attorney my art career had taken off very, very well and it was getting more and more difficult to do both, plus be involved with my husband’s life in Key West. So, I decided when I got my malpractice premium, one year for the law firm, and they had increased it substantially, I said that’s it. [I gave] up being an attorney so that I could just be an artist. And I’m not unhappy that I did that, quite frankly,” she says.

Five years ago her husband retired from his government job in Key West and the couple searched Florida for a destination retirement space. Where was the lucky winner? Dunedin, right near the Dunedin Fine Art Center. During the move, Tamborlane purchased a storage unit at CubeSmart to store her art while she immersed herself in the West Florida art scene.

During one of the first artistic explorations of her new community, Tamborlane shared a pivotal conversation with her daughter while at a local gallery.

“‘Mom, they don’t paint abstract. They paint water and fish and birds. Doesn’t anybody down here know about abstract art?’ I said to her, well I just got here. I’m looking around. I’m sure there’s a place,” Tamborlane continues. “So luckily, just about when I was getting somewhat depressed, I found the Leepa-Rattner museum and I cried – because all around me was interesting and wonderful abstract art.”
. . .

. . .
Growing fond of the Leepa-Rattner and familiarizing herself with the artistic climate of her new home, Tamborlane not only commissioned her abstract work to galleries and purchasers, but shares it in an inspiring and non-profitable way.

She is adamant about donating art to nonprofits, community centers, colleges, hospitals and other places that would not normally host galleries or have the opportunity to showcase original work. This idea sprung up back when she resided in Cranford.

“It does no good to keep my work in storage in CubeSmart when they might be appreciated by people from various walks of life who would never come to know me if a nonprofit did not accept my work,” Tamborlane remarks. “We had close to us The Children’s Hospital of New Jersey and my husband had been on the board there. And the executive director there had hired me to do some contracts, so I got to know the facility and I got to walk the halls and see how barren the walls were.”

Distraught by this discovery, Tamborlane spoke to the executive director of the hospital.

“Children and their families coming here, they need to see something happy. They need to think about something other than blank walls. I’m gonna create a special children’s hospital series of paintings. We’re going to start with one called The Circus.”

The director adored the idea and greenlit Tamborlane’s proposal.

“So I did the series, abstract of course, but you could see some of the animals in the trapeze. There were nine paintings in that series and we hung them in the hallway into the outpatient center for the children. And people were ecstatic. Doctors were ecstatic,” Tamborlane shares that the project was so well received, the medical staff inquired about her adding paintings to their office and the waiting room.
. . .

. . .
“And I was, you know, rolling along. It was such a good feeling.” Although Tamborlane launched this project years ago, she still receives calls and messages from those whom it affects.

“Just this week I got a call from a woman who had gone to one of my hospitals up there. Her husband had to go have cancer treatment and she went with him and was waiting and she said, I saw some of your paintings, they have them up near the cancer wing. She said, I had to call you and tell you how happy it made me to think about something other than the cancer,” Tamborlane shares. “There’s nothing that can replace that at this point in my life. Yeah, I’d like more money. Who wouldn’t like more money?” she rhetorically adds.
. . .

“Life is too short. COVID’s taught us that. I knew that before covid. I still give paintings away. I gave a painting away this week,” Tamborlane says. “It’s who I am. It’s what I want to do.

Tamborlane’s most recent exhibit is on display at the Carrollwood Cultural Center in Tampa from March 30 to May 23. My World from New York To Carrollwood showcases 30 of her original paintings and invites viewers to dive into her world and challenge exactly what lives on the canvas.
. . .