What is a Zine?

A zine (/ziːn/ ZEEN, short for magazine or fanzine) is a small-circulation, self-published work of original or appropriated texts and images, usually reproduced via photocopier.

PRINT ST. PETE Community Letterpress strives to preserve the art of letterpress printing, while offering community access to the craft through public and private classes, workshops and demonstrations, and rentable studio time.

Take Bread Press is a zine distribution press based at Black Crow Coffee in St. Petersburg. TBP offers workshops and demonstrations on making DIY publications throughout the community, and operates a bookstore at Black Crow.

Recycled Hearts Records is a music label and arts collective dedicated to suicide prevention, mental health issues and other causes.

Kimberly Ortega Leon, a St. Pete-based artist and designer, creates zines inspired by art and flora under the name Everbloomingly.

Separate Checks is a Tampa-based collective of 12 artists.  The majority of the collective’s members met through the University of South Florida’s College of the Arts.

The Chain Assembly was created in 2016 as a vehicle for the illustrations and graphic design of Nick Ribera. 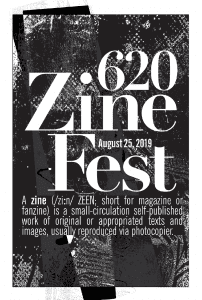 As a Nebraska teenager, she purchased her first zines at her local record shop. It wasn’t long before she was submitting her artwork to DIY publications across the country and creating her own.

“I always thought they were cool,” she says. “There’s a beautiful overlap of art and writing in the zine world… It’s interesting how this one thing is a repository for all these thoughts and ideas, and all these creative methods.”

To this day, Damme still creates zines showcasing her artwork, as do many of her friends, both back home in the Midwest and here in the Tampa Bay area. She’s a familiar face at local zine fests in St. Pete and Tampa = now for the first time, she’s bringing a celebration of zine culture to The Studio@620 in downtown St. Petersburg, where she works as the Director of Marketing and Administration. 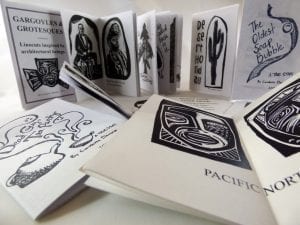 A highlight will be a DIY Zine Zone. This area will be dedicated to “hands-on experimenting,” Damme explains. She plans to set up “an old photocopier” from the Studio@620 office and will provide other materials to encourage 620 Zine Fest attendees to make their own publications.

While zines are still considered “kind of a counter-culture thing” in many areas, Damme says their popularity continues to grow in the Tampa Bay region, and St. Petersburg in particular. “They’re more mainstream here, or maybe there’s just a bigger subversive culture here.”

Zines speak to a lot of different people, she explains. “It’s just a cool part of self-expression that you can take control of and just do it, and I love that.”

Damme added, “[Zines are] affordable. They’re accessible. Anybody can make them… Anybody can collect them. I just think it’s so available to anyone, which is really what I love about it.”

Find out more at
thestudioat620.org/events/620-zine-fest.