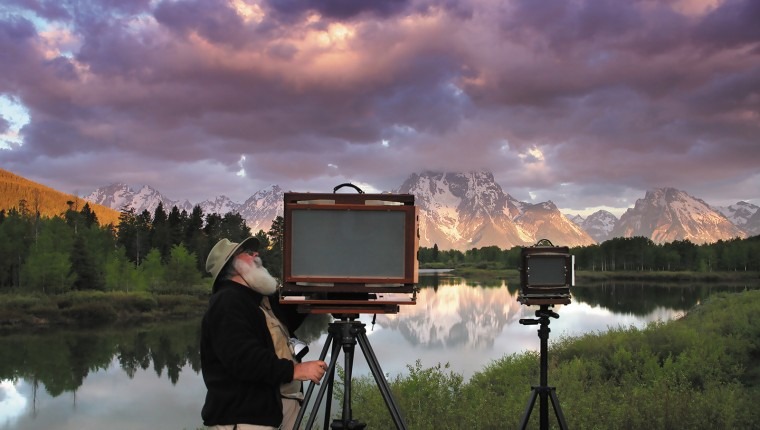 Ansel Adams: The Masterworks
and Clyde Butcher: America the Beautiful

. . .
The works of two masters of black and white photography are paired for a magnificent exhibition at the James Museum of Western and Wildlife Art. Ansel Adams: The Masterworks and Clyde Butcher: America the Beautiful are fine examples of America’s natural lands and spacious skies.

The Ansel Adams works are a traveling exhibition created by the Booth Western Art Museum in Cartersville GA. The gathering of Butcher’s work is by Butcher’s Window of the Eye, Inc. in Venice FL. When asked how this extraordinary pairing came together, the James Museum’s Curator of Art Emily Kapes says, “We worked with the organizers to pair them up at the same time – the opportunities were brought to us at the same time. When we looked further into Clyde Butcher’s work and the influence Ansel Adams has had on his career, it was a natural fit. We talked with the organizers and they both were really excited about the arrangement.”
. . .

. . .
Upon entering the museum, the large bronze sculptures that lead you into the galleries are breathtaking. The second floor is where the photographic exhibition, with its stirring contrasts in black and white, is located. Clyde Butcher’s America the Beautiful photographs are on green walls. Ansel Adams: The Masterworks photographs are on light purple walls. There are 32 of Adams’s and 27 of Butcher’s photographs. Each image has a detailed description. The work represents the photographers’ love for the wild lands and exceptional beauty found in America.

“We knew when we were laying out the show, even though it’s in the same space, we wanted to differentiate. We have different colors and the art is not intermingled. It’s considered separate. There are some wonderful similarities between the two artists as far as their approaches, with its pure form of black and white photography capturing the majestic beauty of our natural world. They both grew up in California. They both had a love of the outdoors as youngsters and their careers have really shown that. They have been champions of the environment as being proponents of the wilderness and getting outdoors,” adds Kapes.

On May 5, Clyde Butcher will give an artist talk on his America the Beautiful photographs and host a book signing starting at 5 p.m. Register soon for the talk.
. . .

. . .
American photographer and environmentalist Ansel Easton Adams (1902-1984), known for his iconic black and white landscapes of America’s West, developed a technical mastery of the medium of photography with exposure and tonality techniques that are still used today. He co-pioneered the Zone System technique around 1940, transforming photography from standard photo to a fine art expression of light and tone.

As a child, he enjoyed the California outdoors and grew to love nature. On a trip to Yosemite National Park in 1916 at age 14, he received his first camera from his father. He was captivated by the region and returned to Yosemite every year for the rest of his life.

The Ansel Adams work ranges from 1927-1968. It is unusual to see a 95-year old photograph. However, in the 1980s, Adams hand selected, printed and signed his favorite photographs for family. The prints on display belong to his granddaughter, Virginia Adams Mayhew. She graciously loaned her collection to the Booth Western Art Museum, who organized this exhibition.

The Adams collection offers stunning images including his famous Moonrise, Hernandez, New Mexico, Aspens, Northern New Mexico and Winter Sunrise, The Sierra Nevada. A sense of place emerges from the stark contrast and play of light and shadows in each photograph.

Though many of his works are dramatic landscapes of the West and Southwest, there are others with people – individuals captured in a natural environment showing their spirits and place of belonging. An example is the Spanish-American Woman, Near Chayo, New Mexico photograph taken in 1937.

Yosemite was Adams’ favorite place. Vernal Fall in Yosemite Valley, California stands 317 feet tall and is one of the most powerful waterfalls in the park, with cascading water and granite walls in mist. To see the fall, travelers must hike to the base on the Mist Trail and feel the damp air that spills from the fall, soaking passing hikers. Imagine the struggles Adams had keeping his large format camera and tripod dry while capturing the photo.

In the 1940s, his Yosemite photographs offered realism to those curious about the National Parks. An important Adams legacy is the way in which his photographs contributed to the American conservation movement and environmental concerns.
. . .

. . .
Circa 1942, the photograph of Arizona’s White House Ruin, Canyon de Chelly National Monument, shows glimpses of the native culture and depicts the striated rock canyon walls. For those who have not visited the Southwest, it provides a broad look at the spectacular formations.

In 1953, Adams took the Church and Road, Bodega, California photograph of St. Theresa of Avila church on the hilltop. It is a striking image. In fact, the church and the school next door were used as a background in Alfred Hitchcock’s movie The Birds. This is another remarkable work that stands on its own.
. . .

. . .
Clyde Butcher, known as the country’s foremost landscape photographer of the 21st century, admired the works of Ansel Adams. He uses his talent in black and white photography to capture impressive images in the large format footsteps of Adams. Fortunately, printing process techniques have advanced – but the photograph itself has to reflect the correct light, time of day, and tonal textures. Butcher enjoys wilderness hikes to vantage points and waits hours for the right elements to appear.

He is an ambassador, renowned for his work promoting land preservation in our country as well as other global environments. “I hope that through my images, people can imagine themselves in these beautiful ecosystems and understand they are worth saving,” says Butcher.

The collection allows visitors to view famous Redwood forests, numerous National Parks, the Everglades swamps near Butcher’s home, and lesser-known preserves. The oversized Pepperwood 1 Redwood Forest photograph is a breathtaking work. The majestic tree and the path beside it seem to encourage drivers on the forest road to hop out of the car, slow down and take a hike. The image’s serenity is so lifelike, you feel as if you could walk down the path.
. . .

. . .
The large Oxbow Bend work is a pristine vision of Grand Teton National Park. Butcher set up the large format camera with tripods and equipment at 4:30 a.m., over several mornings, to catch the perfect moment. The result is awesome.

The Cascades Falls photograph, taken in spring at Yosemite Valley California, is an unusual waterfall. It cascades from high in the mountain, runs under a road and then spills over rocks into the valley. The white and gray tones meld with a foggy sky, creating a distinctive image.

The Saguaro cactus image, taken at Saguaro National Park, shows desert trees and wild plants under Arizona skies. Every National Park has its own form of treasures.
. . .’

. . .
The James Museum is a fascinating place for families. Youth with an interest in photography are inspired by this exhibition and the history of nature photography. Today’s cameras and cell phones offer settings for imaginative photos.

In this exhibition, there are two interactive displays. The large format camera offers an experience under the black cloth where one can see what the photographer sees when framing the photo setting. A video of Butcher and crew hiking in the water portrays the challenges of nature and the fun of exploration.

“We really hope this will encourage people to maybe get creative with their own cameras and go outside, head to a nature preserve or to travel now that we’re somewhat post-pandemic. See some of this beautiful land that’s part of our country,” says Kapes.

There are family activity guides available on the second floor landing. These offer fun activities for kids and teens as they tour the museum. The museum also plans family days on Saturdays. Details are available at thejamesmuseum.org/family-programs. Public drop-in tours with docents for the general collection (not special exhibitions) are complimentary with admission. You can find ticket information at thejamesmuseum.org/visit.

Young photographers are invited to participate in the Landscape Photography Contest detailed below.
. . .

. . .
The James Museum is accepting entries for The Natural World: A Landscape Photography Contest. In honor of our current special exhibitions Ansel Adams: the Masterworks & Clyde Butcher: America the Beautiful the museum invites members of the public of all ages to show us their appreciation for nature by submitting up to 3 black & white landscape photographs in digital format.

All entries must be submitted by 11:59 p.m. on June 9. Details are at thejamesmuseum.org/contest.