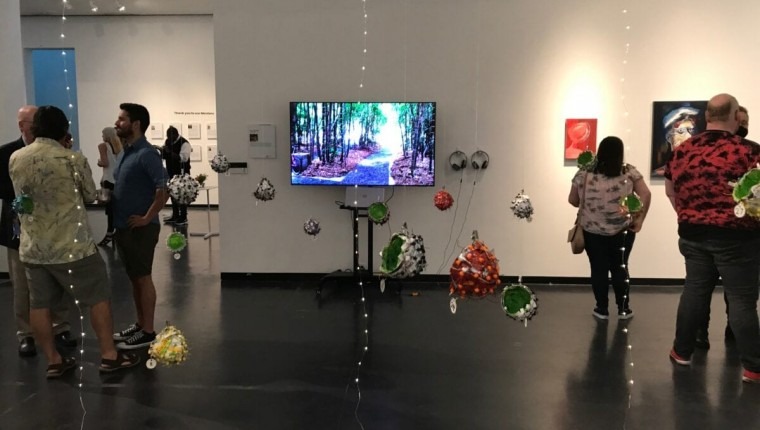 When I walked into the Creative Pinellas Gallery on Wednesday, July 14 for the opening of the 2021 Emerging Artists Exhibition, I truly didn’t know what to expect. I knew I, along with a cohort of nine artists from varying disciplines, had spent the previous several months working on individual projects funded by the Emerging Artist grants Creative Pinellas had awarded us – and this was the night when the fruits of that work would be unveiled to the public.

A couple of days earlier, I had gotten off a plane from Colombia, where I’d spent time doing research for my writing and putting together the video of my work that would be shown at the exhibition. For me, as a writer and introvert, this was an especially nerve-racking evening, given I would present excerpts from my novel to those in attendance. Though I know that, due to COVID, my fellow emerging artists also worked in greater isolation than they would have otherwise, writing can be an especially solitary activity, and this was the first time I was presenting parts of this work to such a large audience.

However, before I really had time to feel overwhelmed by the large number of people steadily populating the gallery, I was greeted by the installation In Their Shoes created by fellow emerging artist John Gascot, which depicts a triptych of scenes in which police brutalize people of color, in the style of the cutouts where beachgoers stick in their heads for photo opportunities.

Without a doubt, this was the piece that created the most buzz during the evening, and it is easy to see why. Though the pieces were installed in a way that prevented the public from actually sticking their heads in the police and victim cutouts, they were a clear invitation to consider our individual roles in these systematic practices, and who helps to continue or stop them.

I was quite struck by the fearlessness of John’s art, and I tried to take that with me as I opened the slate of performances of the night. I always find it quite daunting to read my work aloud, regardless of the audience, but this was particularly intimidating, given that I knew very few of the people present, and I was reading a passage from a work not set in the US for the very first time in a very noisy room.

I figured the best way to embark on this performance was to admit my nervousness and offer a bit of context for the scene I read, in which a teenage couple has just joined a guerrilla group and slowly realizes what it takes to live off the radar in the middle of the mountains. No doubt, my biggest challenge was to try to keep listeners’ attention for several minutes through the noise, which ebbed and flowed as other attendees appreciated and conversed about the rest of the art.

The next performance was by Sara Ries Dziekonski, who captured the audience with poems about motherhood, including one her husband accompanied on the trumpet. One of my favorites was “The Stress Train,” which depicts a chaotic family dinner during a pandemic:

Tell me, when was the last time
we prefaced a meal with grace?
Thaddeus dipped a spring roll
in peanut sauce. Shut the door;
look at the moon, he said to me,
the other day, when I was worrying.

The final performance of the evening was by Tatiana Baccari, whose theatrical piece took the audience on an Everyman journey complete with a brief trip outside the gallery, and which culminated with the protagonist exhaustedly surrendering to Love. I think I speak for everyone in the audience when I say we felt it. In between these performances, visual artist Emily Stehle regaled us with a few songs on her ukulele.

Emily also created some of my favorite visual works of the night, a collection of baskets hanging from the gallery ceiling and the infamous Blue Monster, a weaving project whose construction she meticulously detailed in her blog posts for Creative Pinellas – and whose final look, she said to me, she had no idea about until she saw it on the wall in the gallery.

I was also particularly struck by Mason Gehring’s large-scale paintings, depicting three different health and emotional states, and which she told me she had to step out of her garage (her workspace) to appreciate in their full glory as she painted.

I confess that, during the period when all of us were working on our projects and recording our process on our blogs, I was most taken by Nick Davis’ work, which uses vivid color in its depiction of Black subjects in a way that is very personally appealing.

At the exhibit, I was surprised to find that most of his paintings are quite small, which was particularly noticeable next to Mason’s work, but they still carried such powerful images that it’s no wonder that towards the end of the evening, when I finally had time to check them out in earnest, most of them had been sold already.

I couldn’t finish this writeup without mentioning the work of fellow emerging artists Nikki Devereux, whose collages of planets with various degrees of habitability remind us of just how much work we have to do to save our own; Gabriella Krousaniotakis, whose motion graphics work is deeply technical and impressively realized, and Chelsea Catherine, my fellow fiction writer, who hates to read her work for an audience, but whose writing is just as powerful when read in silence –

What happened in the locker room still happened.
What happened to Clara happened. There is no justice or
revenge that can take away that hurt. No solved case,
no blueberry wine, not even Gwen. The world takes not
because it hates anyone but because it is the nature of things.

I realize I’m entirely biased because my work is part of the exhibition, but I left the gallery that evening with a profound sense of pride in my fellow artists, in the amazing work we accomplished during this pandemic, and in the undeniable quality of the artists who reside in Pinellas County.

I look forward to seeing the work of the next cohort of emerging artists next year.