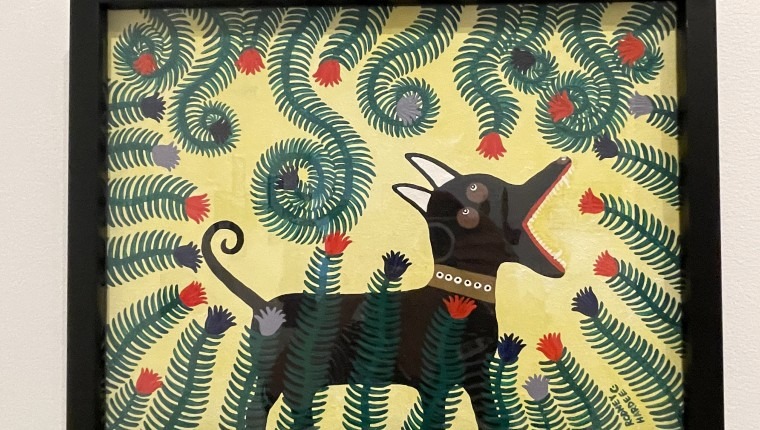 Story and Photos by Emily Stehle
. . .

The Irresistible URGE to Create

. . .
Go to the Tampa Museum of Art – this weekend! – for the experience of seeing work by a group of talented and inspired artists from Western and Central Florida you’ve never heard of – or seen before. Your experience will be eye-opening, exhilarating, soul-searching. . . and perhaps, a little sad.

The Florida Outsider Art Collection celebrates artists who create – to create. They don’t have traditional art training. They didn’t come to realize as they grew up, that they had to be artists. But to them, “. . . making art was as essential as breathing,” as said best in the exhibit narrative.

The show is “a study in inclusivity and diversity, artists passionately engaged, finding solace in their art, creating a private reality, sometimes imbued with spirituality.” The museum defines the collection as “raw art.”
. . .

. . .
I saw this engaging exhibit recommended by Jesse Harris, an art teacher at the MacDonald Training Center (MTC). I’m working with him and his students/clients, mentally challenged and/or physically challenged adults who do art with him every week.
I’m teaching recyclable art, transforming trash into 3-D objects as a result of a grant from Fiber Art Now (Fiber Art Network), an international fine craft magazine. My grant is for a public installation of fiber art at the MTC Joy McCann Culverhouse Fine Art Gallery, displaying both my work and theirs.

It’s a challenge for me and now I’m mapping out work each week to plan the upcoming display. Our opening date is October 14 and Jesse’s working title is Baby, We’re Back! An important show not just for me but for MTC, this is the first formal show since Covid to showcase MTC artists. So, it’s a proud announcement that “we’re here and creating art!”
. . .

. . .
Jesse and I are planning separate “galleries” to include MTC artists’ themed work, special artist “challenges,” sculptural pieces and, of course, my project – the trash studies with art from all of us.

So with that in mind, my observations about Outsider Art, what I’ve called “primitive folk art” in the past, is from the viewpoint as another outsider. I’m one, too. I use traditional basket weaving techniques and non-conventional “free” materials – postcards, newspapers, bottle caps, aluminum pull tabs, etc. – to create art.

I didn’t aspire to be an artist, but it happened. My “garbage art” has been described as beautiful. The work of these outsider artists is indeed beautiful. Take a look with me and see.
. . .

. . .
So many artists and 86 pieces of art in this show, so I’ve selected a few of my favorites based on their backstories or the images in their art. Some artists had challenging lives and suffered solitude, poverty, mental illness and other developmental disabilities including abuse. I can only hope their artwork gave them comfort and the means to express themselves, freely and without judgement.
. . .

Brian Dowdall was a vagabond, sleeping in Golden Gate Park in San Francisco in the mid-1960s. A free spirit, his Animal Spirit paintings show them as “pure spirits of the Earth.” He saw goddesses as “supreme beings whose spirits are ever-present.” I’ve always been drawn in by toothy animals in folk art images so this stood out the minute we walked into the room.
. . .

As a child Ozzie Samuels suffered anxiety. His grandmother suggested he try carving a thread spool with a knife. He soon turned to trunks and roots of trees, mixed sawdust and glue and came up with constructions that became amazing sculptures.

Samuels said, “The state you’re in always comes through in the piece itself.”
. . .

In 1990 Mr. B lost his job at the age of 52. His feelings of hopelessness and shame changed to rage and an obsession with revenge. He thought of killing those responsible for his firing. . . Luckily, he started to paint.

His anger and thoughts of violence eventually changed as did his very crude and simple paintings. This whimsical Noah’s Ark –note a jubilant Noah with arms raised – made me feel peace, reverence and happiness for all living things.

I read Mr. B’s backstory after looking at the animals, and that made me like this painting even more. What’s extra special about this painting is that it glows in the dark!
. . .

A wall in the exhibit is devoted to the work of George Voronovsky, who lived alone in old South Beach. He covered the walls of his room with pictures and paintings on paper, pizza boxes and embellishments from found scrap – aluminum cans, candy wrappers, etc. He also created sculptures from Styrofoam.
. . .

. . .
His scenes are from a re-imagined happy and bucolic childhood. Unfortunately, no one in his lifetime saw his art.
. . .

Miss Ruby Williams sells produce from her stand on a road along State Road 60 near Lakeland. She lives and paints beneath a lean-to on the property.

I consider her marketing sign paintings the best billboards ever! How could you not love artworks with titles such as It Will Get Better, Tired of Being the Good Guy and Shut Your Mouth?

I want to rush out and meet Miss Ruby and buy her strawberries and melons, her black-eyed peas and collard greens (although I’ve never cooked them myself the Southern way).
. . .

Ritchie lived with his parents in their Ormond Beach home. After a diagnosis of schizophrenia, he began to seriously paint.
Ritchie constructed landscapes, usually winter scenes, with dots for leaves and falling snow. Not quite pointillism, but, as pointed out, a process for him to fully engage in making meticulous dots.
. . .

. . .
Ritchie was interested in meteorology as a child, which his mom said might explain his fascination with snow-covered scenes.
. . .

Reva Freedman gave up practicing the violin for painting and often painted throughout the night, working simultaneously on dozens of paintings on the walls, tables and floors of her home.

Take a look at the bottom artwork. If you think this is inlaid anything, look again. Closely. Each piece of inlaid “wood” is painted to mimic specific woods.
. . .

Best known for her “missionary girls,” Mama Johnson also drew “aliestos” or aliens. She doodled her entire life and never considered herself an artist.
. . .

. . .
It is said Mama Johnson was surprised that people were interested in her images. “People say they’re beautiful,” she noted, adding “but I think they’re ugly.”
. . .

. . .
I’m drawn to her personality and am partial to her color palette. That is why I’m showing three of her works.
. . .

Garan has a dream where he’s stuck in a shrink-wrap machine. OMG! His “face” has not one hint of shrink wrap but I think we know what he means and can feel his cold, confusing, muddled and alien world.
. . .. . .

A recluse, Cooper lived in an 84-square foot shack that he built in his parents’ back yard in Sanford and decorated with hand-sawed wood and hammered metal objects. There he lived, without utilities, for 50 years in his refuge from the world after his medical discharge from the Army in the mid-1940s.
. . .

We use manila file folders to sort and organize papers. Schwartz used them to make “booklets” to tell stories from pictures cut out from magazines.

His works share his faith in Jesus whom he called “the leader of the band.” He created a peaceful world where “Hebrews,” African Americans and others live together in the same space, and where there is no conflict.
. . .

The story goes. . . Jesse Aaron prayed for guidance and one night, a voice woke him, “Jesse, carve wood.” From that time on, he carved forms from wood with chainsaws and used hammers, chisels and knives. Eyes were cast from epoxy resin. Found antlers, animal bones and objects became part of his animals.
. . .

What a happy dog! What a happy artist. Hardee’s simple barking dog is a joy. To me, I felt as happy as whenever I watch funny cat videos.
. . .