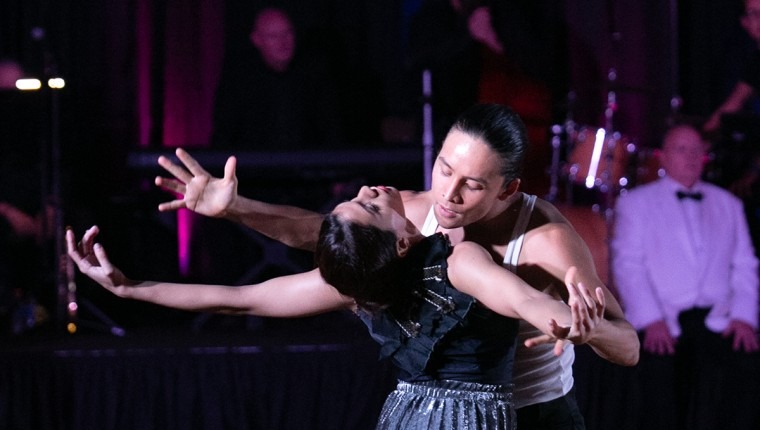 I am panting in the heat of a false fall day as I hurry towards El Circulo Cubano de Tampa, colloquially known as the Cuban Club. The Saturday bustle of Ybor City’s legendary 7th Avenue is at full volume as I walk past sidewalk preachers and street vendors selling cigars and single-stem carnations. As I turn onto the Avenida Republica de Cuba, I’m greeted by the ornately detailed Cuban Club – rebuilt in 1917 after the initial structure burned down in 1907.

Momentarily stunned by the building’s imposing neo-classical design, I remember to slide on my mask — it is still 2021 after all — and am immediately refreshed by a light breeze of AC and the cool terrazzo floors underfoot.

The Tampa City Ballet’s kick-off event of the season, Interstices, begins right on cue for the matinee performance with a singer and pianist crooning in the corner of the first floor lobby.

The space is crowded with a mix of masked and unmasked faces. The bartender shakes out drinks into clinking glasses in the corner, and a palpable curiosity travels the room as we, the audience, collectively search for a sign that the show has truly begun.

From my vantage point, I am first to catch sight of a methodical parade of the past as it descends down the staircase. Ballerinas and ballerinos are bedecked in feathers, fringe, sequins and hats. They are stoic and smooth as they keep their measured pace, clicking character heels against concrete and parting the crowd to take their place at the center of the lobby — a makeshift stage.
. . .

. . .
An emcee hops on mic and welcomes these locals as they join and intermingle among us. We are told that some of these men and women, waving their cigars and long cigarette holders, are dangerous. Many are whispered to be affiliated with the Sicilian mafia. We must be careful, though we may touch and talk with them as we wish. The emcee emphasizes that they’ve taken a break from their busy lives to convene and dance at the social club.

And so, Interstices begins. Paula Nuñez, choreographer and artistic director of the Tampa City Ballet writes in the program that this performance should call to mind a bygone era — 1930s Ybor City. The inspiration for these characters – currently encircling us where we stand and lounging about on sofas – are drawn from the book Tampa: Impressions of an Emigrant, written by Cuban author Wenceslao Gálvez y Delmonte and translated by Noel M. Smith.

In front of me, two ballerinas whisper. Across the room I catch a couple slow dancing in one another’s embrace. The audience hovers tentatively, but the peace is interrupted — the first break.
. . .

. . .
A gangster, decked out in a white three-piece suit, strolls through the susurrant cliques. He oversees the bolita drawing, an illegal gambling game where numbered balls are drawn out of a black velvet bag.

The emcee narrates as the drama unfolds. Some of these characters feign devastation as one dancer faints to the floor, while another is intoxicated with unadulterated joy for having won the jackpot.

The emcee notes how these immigrants were not only Hispanic, but German, Italian, Rumanian Jewish and Chinese. I am half-listening — the progeny of Polish, Italian and Irish immigrants — as I am swept up in these tableaus of joy and pain, of decadence and the unknown. The emcee interrupts my reverie again. Another break.

. . .
Dancer Ethan Barbee assumes the role of the “White Shadow,” a portrayal of Charlie Wall, the real-life gangster who the Tampa Bay Times crowned “the dean of Tampa’s early underworld.” In 1895 he was arrested for shooting the family cook. In 1950, he was arrested for connections to a gambling ring. For all those decades in between, Wall held the unique position of pulling the strings in Tampa’s city elections and illegal activities.

I feel like I’ve been sworn into this gang, given where I chose to stand in the lobby — the audience incriminated by association. Moments continue to pass by at half speed like a black and white movie as we are given snapshots of a long-departed Ybor City. Contemplation interrupted again, the emcee urges us to move upstairs. I climb up with the mob, noting the abrupt transition, and not quite ready to leave these half-developed characters.

The second-floor landing rivals the first floor’s magnificence with a stained glass three-pane Diocletian window as its centerpiece. However, the window stays to our backs as we stumble into a makeshift workshop.
. . .

. . .
Two rows of dancers seated in chairs echo the hand-rolling mechanics of an Ybor City cigar factory. The tight space makes it hard to take in the full picture as the dancers remain frontal facing, but it is clear by the percussion and harsh lights that we have abandoned the first floor’s subtle elegance to reveal the sweat, grit and labor behind the façade.
. . .

. . .
The interlude is brief, and soon we are ushered once more up, up, up. The third and final floor gifts us the open air of the ballroom with space to breathe and be apart from the humid, crowded quarters. I didn’t realize I’d been craving such distance — I suppose it’s the ongoing trauma of 2020 after all.

The chandeliers soar over a sprawling wood floor as local quintet Grady’s Rhythm Gentlemen brings us back to Cuba with polyrhythmic flourish. Seated in the round, I sit, listen and wait. Will the “White Shadow” reappear? Have we abandoned the cigar factory altogether? Only time will tell.
. . .

. . .
Another break. This one in character, as a brand-new emcee greets the audience to set the scene. He describes Tampa as he remembers it, with sand in its streets and an abundance of orange groves. Again, the motif of a slow procession returns as dancers stream into the ballroom, the cast having shed their feathers and finery for simple black, silver, and white shirts, pants and skirts. There is talk of a revolution, exiles working to send money back home, the “White Shadow” and his role in the backdoor deals that fuel rumor mills.

More bodies fill the space and I recognize the classical shapes that remind me I am at the ballet. They are broken and discarded just as quickly as they’re made — rigid arms pushing into the air, hands clasped over mouths. The emcee has silently taken his seat at a desk with quill in hand, assuming the role of the historian. More characters are named and introduced via solos and duets — women organizing a social club, a man reading to a factory as its lector, the famed Sanchez sisters and their patriotism.

One particular duet stands apart from the rest as a woman is tossed and tilted about the ballroom floor. I can’t help but think she is the heart of Cuba. Is she the dream deferred that the orator continues to speak about? The explosive hope and longing that cannot be contained within an arabesque or neck drop? She is lifted and flies up by the chandelier, but only for a moment. She is Icarus, melting back to Earth.
. . .

. . .
The loving tenderness of the duet is disturbed by the ensemble. They are tugged about like ragdolls, pulling one arm and then the other. They jump to face a new direction, jump back again, and face where they started.

These are the patriots, the workers, the onlookers who want to change and be changed. The music beats underneath us, the floorboards absorb the throbbing, beautiful menagerie. Terse moments continue to break permanency. Broken places and people, every “1-2-3-4” uttered by the bandleader drags us back to a place we’ve heard before, but never seen.

Dave Brubeck’s “Take 5” comes moments before a fight breaks out between these warring factions. We are taken somewhere new, the orator leaves to write some more, ever the historian scribing what is being written in the air by errant limbs. Seeking to capture what cannot be held onto.

Most intriguing are the roaming groups of shrugging dancers as they shuffle and jitter like the possessed before they’re released. The gestures from the cigar factory return again and again – hands twisting, wringing, filling and splaying.
. . .

. . .
Another fissure in time, as guest artist and singer Alina Izquierdo, the “voice of a diamond in Cuba,” accompanies guest dancers Daylenys Muñoz and Daniel Sarabia. Their pas de trois is a true highlight, recalling the elegance of where we began this affair in their intertwining and voluminous partnering.

I am unsure of the role they play in this history, but am delighted to drink in their vitality nonetheless. In fact, I’ve begun to unravel in this disjointed finale. Is Nuñez reflecting to us the fabric of a similarly disjointed community? All eyes remain on the “White Shadow” as he moves away from the ensemble. They react as if an extension of his body, but is there unity in their synchronicity? Can there be?
. . .

. . .
As the mass accumulates, each dancer bears the weight of breath, pain, the unresolved, the revolution, the tension held in their shoulders, their hands raised in prayer, the shrinking and expanding of this amorphous cast. The opera singer walks a dirge, the two emcees revolve back to back.

The entire cast walks into a line in what seems to be a conclusion, but it does not feel finite.

I want to understand the story but have only gathered half an image from every section. Like a black and white photograph, burned at the edges and showing its age spots. We want to see what they are seeing — the audience yearning to know the past. I know we can’t and never will, even in this re-imagining of the Cuban Club in its heyday.

After the cast takes their bows, the audience is pulled at random to dance on the ballroom floor while the band plays us out.

I allow myself to be taken by company member Lily McCrossin in this final number.

What is still being written here?