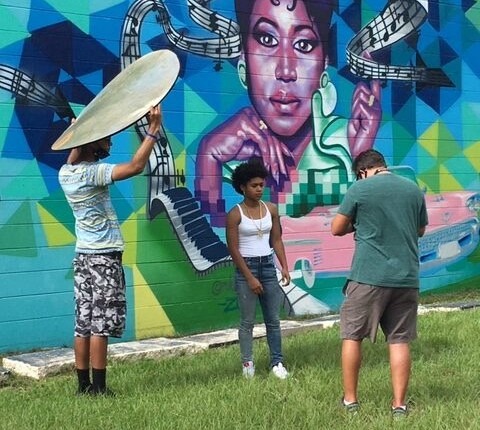 2020 has been a game-changer for everyone. Most people have had to adapt their careers, interests or goals to whatever the year has brought.

St. Petersburg resident Michelle Passoff was no different. The pandemic hit soon after Passoff decided on a project to complete as part of a self-expression and leadership workshop.

“Our assignment was to select a project in which we could explore new possibilities in our life and create a new future in one of the communities in which we live,” Passoff said in a recent email interview with the Arts Coast Journal.

“When the pandemic hit, I had to change my original project because it required too much interaction in public places.” she adds, “So, I sat at my kitchen table bewildered about what to do about life in general, and what to do for a project when the program moved to a Zoom format.

“I wanted to quit because I just couldn’t fathom doing a community project when I couldn’t leave my house!”

Though her original concept had to change, the subject matter stayed the same – the importance of voting.

“I feel very strongly that the citizens of this country need to speak up for what they want. If they want the democratic process to endure, they have to say so by voting,” she adds.

“I started inquiring with voting organizations about how I could contribute and after several conversations it just came to me – create an original music video about voting!”

There was one issue – Passoff had no musical background, “I was thrown out of the fifth grade choir for singing the loudest off-tune.”

Currently, she and her husband own a decluttering business, the art studio MPAK Art + Design and are part-owners in a potato farm.

But her past experience in marketing and communications, where she “spent most of my career in Manhattan as a public relations consultant and media specialist” came to her rescue.

“I have years and years of experience in communications and sometimes what needs to be said is said effectively through song because it goes right to the soul,” she says.

Passoff is no stranger to being a fish out of water. “I wrote a book called Lighten Up! Free Yourself From Clutter, which was published by HarperPerennial in 1995,” she adds.

“Even though I had never written more than a two-page press release in my work as a public relations consultant in New York City at the time, I had no doubt that I had something to say that was worthy of the attention of others.”

Passoff called on experts to help her out, which she found through friends and just searching the internet.

She started this project “by googling songwriters in the Tampa Bay area,” Passoff says. “That is when Tanya LaReese came on board.”

Local soul and gospel singer Tanya LaReese’s powerhouse vocals are the perfect kick-off to the track.

Musician Joe Porter, singer Jeff Blake and composer Patti Ecker were next to be involved, thanks to recommendations from neighbors.

“The participants in this project range in age from 16 to 77 years old, are all ethnicities, and the song is a dancehall tune with a bit of rap and is sung in Spanish and English.” A version of the music video on YouTube is accessible for the Deaf and hard of hearing community through text captions and American Sign Language.

Dancehall musician and producer Nawlage, who has worked with French Montana, was the topper.

“Everyone submitted ideas for lyrics and Nawlage took everyone’s thoughts, worked with a colleague of his in Canada, and came back to us with lyrics and a soundtrack that impressed everyone.”

Soon seven singers were recording in a local studio and the song was finished.

The music video, which takes place at St. Pete Beach, Tampa’s Curtis Hixon Park and other area staples, was the end goal all along.

Passoff not only got help from musicians, but videographers, media and marketing people signed up to take part.

“I had two videographers who both said ‘yes’ to volunteering their time,” she says. “It turned out that they not only knew each other, but they were buddies in college and were excited to work with one another.

“I prospected for an attorney, marketing and media people and boom, we had a huge team of talent.”

Passoff hopes the video goes national, that the message reaches the people who need it and people get out and vote.

Like the song says, “Let your voice be heard.”

“I thought it would be a good use of my talents and reach more people than I could by going door to door.”