St. Pete Heats Up with
10 Jazz Performances at 10 Venues 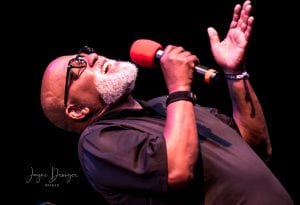 While not what you’d consider a jazz hotbed, St. Petersburg has lately been showing signs that the music is on the upswing. It’s a little early to declare an out-and-out resurgence, but the ambitious JAZZ on the Artwalk event on Saturday, October 12 is certainly an encouraging development.

Let me pause here for a minute and state the obvious: This is a really good idea. Giving people something to listen to as well as look at just makes sense when providing a community arts experience.

This jazz bonanza includes 10 venues in all. And it’s free.

The full schedule of JAZZ on the Artwalk venues and performances is here.
Attendees can hop on one of the three free trolleys, which run every 20-30 minutes.

The marquee attraction, not held in a regular ArtWalk space, is JAZZ on The Deuces at the Historic Manhattan Casino, which was once the entertainment nexus in the city’s African-American community. Fats Waller, Louis Armstrong, Duke Ellington, Nat King Cole, Ray Charles and James Brown comprise a short list of legends who performed here from the 1930s to the late 1960s.

JAZZ on the Deuces will present six hours of jazz in an array of iterations. Here’s a look at the schedule and performers:

Johnson is arguably the most prominent singer that Tampa Bay has produced. The St. Pete resident has traveled the world, playing festivals internationally and acting as a musical agent for healing and peace.

He and acoustic bassist Ross both arrived in Tampa Bay in 1977 and became friendly early on. They shared stages over the years, but in 2017 decided to put together a long-discussed project that features voice and bass (with Johnson adding percussion).

The tandem performs jazz standards, classic pop-soul numbers and “sound sculptures,” where Johnson asks for random words and phrases from the audience and the partners spontaneously compose a song. They’ll be joined on this gig by pianist Liston Gregory III.

The busy keyboardist and singer describes his music as “a gospel jazz R&B sound.” His regular band includes saxophone, drums, guitar and bass.

He can take a tearjerker ballad like Bonnie Raitt’s “I Can’t Make You Love Me” and turn it into a bended-knee plea. In whatever format Brown operates in, his music’s key calling card is high-pitched emotion.

Carter possesses a brawny, blues-drenched sound on tenor sax, ideal for his take on the classic soul-jazz of the ‘50s and ‘60s as well as blues and R&B. Yet he’s also versatile enough to front tributes to John Coltrane — as he did in July at the Side Door at The Palladium — which can be a fearsome challenge for any saxophonist.

Carter is regular on Bay area stages, and kicked off last year’s highly successful Summer of Soul series at the Side Door. A Nebraska native, he says he took up saxophone in part because of his mother’s affinity for Grover Washington, Jr. For a two-hour set, I would expect that it’ll feature some guest sit-ins.

For starters, it’s capping off a major jazz event, which raises the stakes. Secondly, the roll call of players is impressive.

Suggs is a relatively young but well-traveled trumpeter who hews closely to the swinging, post-bop tradition, making him the ideal leader for this blowing session. After joining the grade school band in Harrisburg PA, he he saw a Wynton Marsalis concert at age 10 and his fate as a jazz musicians was sealed. Suggs’ 2018 album, You’re Gonna Hear From Me, a collection of swinging standards, has gotten ample radio play.

With a bevy of formidable musicians likely to hang around after their sets, expect a revolving door of players to join in. The Jazz Jam is included with any ticket purchase.