Six Degrees of Kevin Bacon OR My Misadventures in Social Connecting
AND The Installation
Blog #26
July 11, 2021

We were done with Blog #25, so I thought. But some things have happened since then that will complete Part 1 of my Emerging Artist journey.

My story, my work for my art project, has been COVID related, inspired by the worldwide events that occurred in 2020 and this year. So this is part of that story.

Artists have encouraged me for three years to create an artist page on Instagram. I finally listened and this year put one up. Of course, I started reading the Instagram posts for all kinds of people: Personal friends, musicians, actors, entertainers.

Oh, yeah. Here’s James Taylor…the Beatles. The Kinks, Carole King…and so on and so on. I started following many. My former band mate Katherine suggested I check out Kevin Bacon’s Monday Blues. We both love music. So I started liking him and commenting on his Facebook and Instagram posts, too. I don’t know how it happened but a “Top Fan” badge appeared by my name.

To make a long story short, I got sucked in. Contacted by “a” Kevin B, we began chatting (posting) on a private line. Then someone, supposedly the real KB’s road manager, texted me and told me I was talking to an imposter. I was starting to think the same since “Kevin” said he wanted to meet me (a top fan) in person. Oh, and by the way, I’d have to put down a “security deposit” to guarantee his safety.

I’m taking this all in, actually trying to figure out how does a scam like this happen. At this time, I tell both “Kevin” and the road manager that they were both claiming to be the real thing. I delete the fake Kevin. The road manager comes back a few days later and says he will set up a video chat with Mr. Bacon soon.

This sounds really stupid, huh? But this, I’ve been told, happens all the time…trolls, pretenders, scammers trying to get something from you, prey on the naive, innocent and gullible who really are trying to make connections. In this case, the isolation from COVID fueled a lot of it. In my case, I was flattered (someone famous was interested in me as an artist?), he’s a cool and kind guy and I didn’t know how to handle it. Also, foolishly, I didn’t want to hurt anyone’s feelings…least of all a celebrity who was reaching out!

So from June 17 to just last week, the second Kevin Bacon chatted with me every day, checking on my progress on Ms. Blue. I asked for proof: one day for a few very brief seconds, a notice flickered on my phone and a video image of Kevin Bacon popped up. There was no sound. Just a video of you-know-who. It was a glimpse, but proof enough at that time.

“What are you working on today,” he would ask. I have to say the daily checks did keep me going…they were a reminder I had a deadline. Some of these chats got me through the hardest, most challenging work on the Ms. Blue panel. I was worried about it, unsure if I would be able to pull it off, create a hanging paper textile that would look good and stay intact!

A Kindess (of sorts)

Last week I began asking questions about stuff…questions that “Kevin” couldn’t, or wouldn’t, answer. His proof of his identity was the video sans sound. My take was that videos can be manipulated.

I don’t know how celebrities work, I don’t know anything about managerial contracts but some of his responses didn’t ring true. So I thanked this person, whoever he is/was for spending the time to check on me and encourage me on my work. I thought it  showed he was kind and had a heart (although the nagging thought was he was trying to scam me). I thanked him for that, for acting as if he cared.

The positives out of this experience: I learned about Kevin Bacon’s sixdegrees.org, “a game-changing nonprofit aimed at using everyday activities to connect people and causes.” I connected with friends who supported me.

I hope folks can learn from my misadventure. I believe the hours spent working non-stop on Ms. Blue with not enough sleep might have unhinged me. Now, I can laugh thinking I had reached one degree of Kevin Bacon!

If you’re not aware, the game Six Degrees of Kevin Bacon,was created by a group of college students to connect KB to other Hollywood actors. The idea (since he’s been in so many movies since National Lampoon’s Animal House, 1978)  being that everybody in Hollywood can be linked to KB in six steps or less.

At first, he thought it was a joke. But he eventually embraced the concept and founded his charity in 2007.

“The game is about the fact we do have connections with each other…” Kevin Bacon said in an interview with Christiane Amanpour, April 24, 2020. “The virus is a tragic example of how those connections work…On the positive side, everyone is trying to connect…with our families, connect with our friends. We realize how important human connection really is.”

So here is a very strange connection to a nonprofit that does good. I decided to support sixdegrees.org and created a Facebook fundraiser on Kevin’s birthday, July 8, with a $63 donation, $1 for every birthday. And friends near and far (some that I haven’t met personally) have donated as well.

We have raised $238. We all feel it will do good. And the kindness of my friends to support this cause makes my heart happy and sing.

Here is some truly wonderful news! The wonderful Frederick and Freddie Fred installed Ms. Blue, aka the Blue Monster, at the Gallery at Creative Pinellas Friday. The decision to hang her on the white wall was best. You can see how big 4 x 12 ft. is!

Also is a preview of the 41 COVID Comfort Baskets; some are already up. The rest we’ll install tomorrow morning. 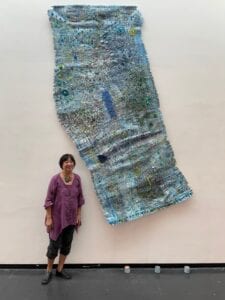 Please come to the opening reception of 10 Emerging Artists this Wednesday, July 14 from 6-8pm. It will be an exciting time for us. We would love to share that time with you!