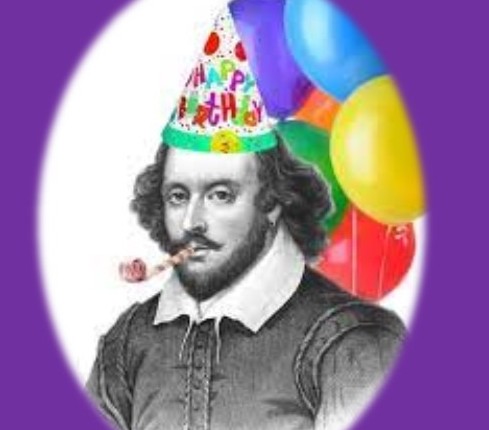 You are cordially invited to
The Inaugural William Shakespeare’s Birthday Bash!

Since 2014, St Petersburg Shakespeare Festival has brought live performances of Shakespeare to the Tampa Bay area. Originally the brainchild of Veronica Leone Matthews and USF professor Lisa Starks, the company persevered and became a twice a year staple in Williams Park before Covid temporarily stymied the company’s creative roll.

Now, The Inaugural William Shakespeare’s Birthday Bash marks a new emphasis for the company on creating a festival atmosphere focused on all things Shakespeare. In addition, the company is placing great importance on focusing on Shakespeare’s language. We’re celebrating Shakespeare, and celebrating human connections and interactions. The festival is fun for the whole family.
. . . . . .
The Birthday Bash highlights several ideas the company has long held dear – that theater is for everyone, that theater is a collaborative effort, and that theatre can help create and strengthen community.

The company’s focus speaks to the continuing power and popularity of the Bard’s plays. Shakespeare’s works have been part of the western literary canon for 400 years, and his plays continue to enlighten and delight audiences. The characters resonate with contemporary audiences as clearly as they did to the Elizabethans. “One of the joys of doing Shakespeare” says Producing Artistic Director GJ Thompson PhD, “is finding new elements in the plays and characters, that help humanity to understand itself.”

On the schedule are “Shakespeare Shorts,” heavily abridged versions of the plays, focusing on one storyline taken from a more complex original. The Shorts this year include A Midsummer Night’s Dream: Just the Lovers, A Midsummer Night’s Dream: Just the Mechanicals and Twelfth Night: Malvolio’s Tale. One of the goals of these “Shorts” is to provide audiences, especially those who may be new to the Bard, an introduction to the story while maintaining Shakespeare’s language.

Harrison Baxley, director of and actor in Just the Lovers says, “One thing we have been working on is making the language accessible. St Pete Shakes’ collaborator ThinkTank Theater prides itself on creating theatre for all ages, so I’m hopeful this will be some people’s first time ever seeing Shakespeare.”

According to Baxley, “[Thompson] has come up with a really fun way to make Midsummer feel like it’s family friendly. I don’t want to spoil too much, but imagine Romeo and Juliet meets the Muppets.”
. . .

. . .
Kari Velguth, actress in both Just the Mechanicals and in Malvolio’s Tale emphasizes the importance of human connection in live theater. “After two years of isolation, to feel an emotional connection – laughter, sadness, joy – with other people is devastatingly human.

“It is a deliciously analog experience to share a moment of storytelling created in a live theater between the performers and audience. Shakespeare’s shows haven’t lasted for 400+ years just because of lovely language and an extensive vocabulary – they have lasted because they embrace that connection.”

St Pete Shakes wants our audiences to enjoy themselves, to have fun – but we also want you to really hear and appreciate Shakespeare’s language. Along with paring down the texts, the “Shorts” are using minimal staging, costuming and technical elements, emphasizing the actors the importance of the words and their delivery.

Cinda Goeken, director of Just the Mechanicals speaks to the joys of working with talented artists who bring fun to Shakespeare’s text. “Personally, for me,” says Goeken, “I am living the dream when I have the opportunity to gather together six bright, imaginative, creative and fun-loving actors (and a top-notch Stage Manager) to direct a Shakespeare project in Saint Pete.”
. . .

. . .
Bello Pizzimenti, director of Malvolio’s Tale says, “I have no doubt that the production will have audiences ‘Gabbling Like Tinkers.’ I am happy to have been ‘One… In this Interlude,’ and hope that my humble but earnest offering in the creation of this work can add something small but mighty to our celebration of the Bard’s Birth.”

Another way St Pete Shakes is exploring the joys of Shakespearean language is through the “Shakespeare Insult Tent”. What could be better than being called a “canker blossom” in front of friends and family? All in good fun, of course.​ For “$1 per affront” guests can incur a Shakespearean put-down. Thompson says, “Trust us, there is a long list from which to cull insults.”

​. . .
Studio Grand Central is located at 2260 1st Ave South in St Petersburg. Half a block of 23rd Street South will be blocked off from traffic and filled with performances and Shakespearean fun. Outdoor activities and performances will take place from 10 am to 7 pm. The Mainstage is outdoors so drink plenty of water and bring sunscreen.

This year’s festival is brought to you by St Petersburg Shakespeare Festival and Off-Central Players, with the generous support of our community partners Studio Grand Central, Big Break Youth Stage, Think Tank Theater, the St Petersburg Arts Alliance and The Gobioff Foundation.

You can find ticket information or how to volunteer here