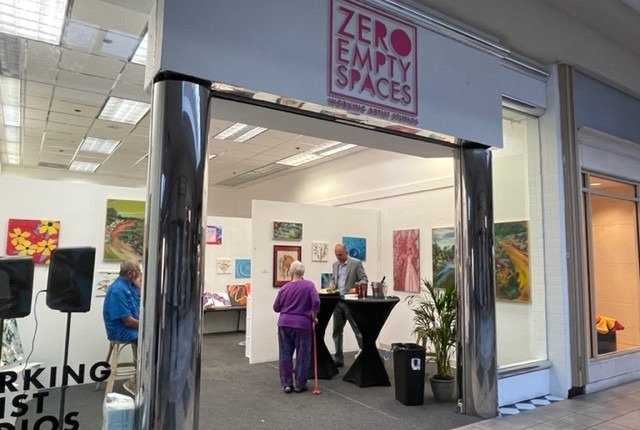 . . .
There’s always a need for affordable studio space in a thriving art community. So, it’s no surprise that someone would eventually come up with an idea – one that brings new meaning to the phrase “going to the mall.”

Evan Snow, a co-founder of Zero Empty Spaces based in Fort Lauderdale, previewed his idea – a vacant storefront for artist studios – at Tyrone Square Mall in St. Pete earlier this spring. About 60 people showed up to walk through the space, a narrow long store with 14 spaces partitioned out for 80-, 120- or 160-square foot areas (think a bigger cubicle office). Spaces rent for $200-400 month per month plus tax or $2.50 a square foot including water and electric. More than 50 visitors filled out an application.

Now four months later, Zero Empty Spaces had its first opening to acquaint St. Petersburg with its latest working studio/art gallery. Two of the smaller studios up front at the entrance were converted to community gallery space before the opening. Six of the 12 remaining spaces have been rented – all to painters. Considering that “we’re not on Central Avenue, we’re not downtown,” Snow, serving champagne at the opening, was upbeat about the positive reception by visitors that night to Zero Empty Spaces.

“Here’s a space to create with some built-in traffic,” he says. “Our artists are making beautiful art, and they showcase their work in a gallery setting.”

Why Space at a Mall?

. . .
Snow credits his art marketing, art fair productions such as Art Fort Lauderdale (including art fairs on the water and in private homes) and arts advocacy experience for leading him to the business of finding and creating space for artists to create. Zero Empty Spaces has leased vacant spaces from Simon Property Group and other property owners and developers since 2019. Simon Property Group is the largest operator of retail malls in the U.S.

Snow says they recently opened “the first art studio in the world next to a Louis Vuitton Store” at the Natick Mall in Boston. The Tyrone Square Mall space, along the Dillard’s Corridor, is the company’s 26th location and managed by Tarin Mohajeri, who lives in Clearwater. The next is scheduled to open soon on International Drive in Orlando.

Zero Empty Spaces is always looking for vacant buildings, says Snow. That is, space to turn into studios and partners or organizations to work with in other areas of the country.

. . .
Will Zero Empty Spaces bring business to “help save” the mall? Is the mall a good place for artists to sell work? Is it “good” studio space? Is the rent truly affordable?

A few of the artists who toured the mall space were skeptical of its viability as a working studio and retail gallery. The store has a front rolling gate and a long and narrow footprint that Jackie Kaufman, a jewelry designer, considered not an ideal retail space. For 10 years she successfully sold women’s jewelry and accessories at a mall kiosk in Fort Lauderdale.

She questioned the issue of security during mall hours as the gallery studios would be open to walk-in traffic. The eventual plan is that artists would schedule work hours to staff and monitor the gallery space 10 am-8 pm Monday through Saturday and 11 am-6 pm on Sunday. Snow sees the positive in taking a vacant space and making it available to artists who can’t afford current studio rates in downtown St. Petersburg. He has seen collaborations grow at other Zero Empty Spaces studios between artists, their mall and other businesses – and a Zero Empty Space artist was solicited by three galleries and now has work in other locations.

Here, he sees a growing interest for available space in Clearwater, Dunedin, Safety Harbor, Palm Harbor and south in Fort Myers and Sarasota.

As far as the rent question is concerned, Snow says he has traveled around the U.S. looking at empty spaces and thinks their prices are affordable. “Very seldom can you rent 120 square feet of full retail for $300,” he says, adding that he pays $3.17 per sq. ft. for a public storage unit.

The month-to-month agreement, rather than a year-round lease, allows greater flexibility and “no burden or penalty” if an artist decides to move or close down their studio. Regarding theft of artwork or other property, Snow says no issues have been reported at any Zero Empty Spaces location. . . .
Painter Brittany Worlinsky grew up Pinellas County, attended Pinellas County Center for the Arts and earned a Bachelor of Arts degree from the University of South Florida. She also attended Gnomom School of Visual Effects and Animation and Otis College of Art and Design in LA. She lives in California and returns to the area frequently to visit family.

She finds her 160 sq. ft. mall studio/gallery space works well for her as it’s convenient, affordable and provides adequate space to teach painting to small groups. She hopes to develop an art school where she devotes half her year in LA and the other half here in Florida.

Atlanta Visual Artist/Illustrator Roderic Johnson started his career in art as a pre-teen in Detroit illustrating school theater programs. He went to art school, but during that time changed his direction to continued his education in sociology. Social justice and racial equality had become a passion, and for the next 20 years, Johnson traveled the country facilitating community-based efforts for positive change.

More transitions and then a medical emergency – a brain injury – have brought him back to his first passion of creating art. In 2007, Johnson finished Smiles, his first painting after 25 years, using his non-dominant left hand. Ever since, he’s been drawing, painting in watercolors, gouache and oils and creating “salvaged” art from reclaimed window frames.
. . .