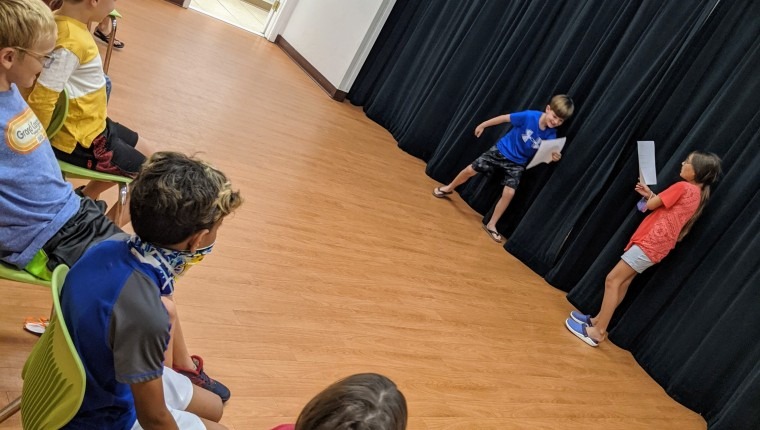 Creativity and Accessibility in the Spotlight

. . .
Imagine being a child and auditioning for a play—but told there’s no part for you. Now, imagine you’re a parent and you can’t afford to fund your child’s passion to perform.

Fortunately, Pinellas County has Kristin Tsafatinos and the Safety Harbor Children’s Theatre, whose main goal is that every child interested in theatre gets a chance to participate – and that every parent can help make it happen.
. . . . . .
Tsafatinos, who lives in Safety Harbor, grew up in the Richey Suncoast Theatre in Pasco County. “I had the opportunity to learn everything from performing to working backstage with costumes and lighting,” she says. “My experience in community theatre was that everyone who came to audition had a place in the show.”

Now Tsafatinos is a mom and her oldest, who is eight, has taken an interest in performing. “Pinellas County has some great opportunities but for younger kids it is few and far between,” she explains.

Largo offered a children’s theatre program through Parks and Recreation and Tsafatinos took advantage of that and a few other opportunities, but none were as close to home as she’d have liked. “When covid hit, all programs were canceled. In the meantime, my youngest was about to start preschool. A friend said ‘why don’t you start a theater?’ So, I prepared my Sharktank pitch,” she says. “I had all of my talking points ready.”
. . . . . .
She approached the Safety Harbor Library and the Safety Harbor Recreation Department. The city known for its artsy vibe, loved her ideas. “We offered improv, musical theater, and one that was a creative drama with puppetry,” she says. “The summer program proved that yes, the kids were really interested.”

The sessions continued through fall and the City of Safety Harbor’s recreation program is currently registering for their spring session. “We will be performing The Wizard of Oz,” says Tsafatinos, who is working with the Safety Harbor Public Library to offer future workshops, such as improv and a Broadway bootcamp with a voice coach and a dance teacher.
. . .

. . .
“Because my son is interested, we were finding programs all over,” Tsafatinos says. “It’s lovely that he is involved. But not everyone has the means to pay $400 for their child to participate.

“I knew right away I wanted the program to be a nonprofit,” adds Tsafatinos, who serves as the board’s executive director. For her and other board members, tuition should never be the factor a parent must face when finding the right opportunities for their children to participate in theatre – currently, there is low or no cost for the sessions.
. . . . . .
“What I am trying to do is be that connection piece, build this program by pulling people in who know what they’re doing.”

She uses a network of volunteers, some she connected with through Richey Community Theatre and some are other parents and friends.

“Any fees go right to the 501c nonprofit. That is getting us our nest-egg that we need for licensing and scripts and we are able to fund what we will be doing in the spring.”
. . . . . .
Registrations are currently being accepted for January through May for all three programs for spring 2022 on the City of Safety Harbor’s website.

“I suggest people use the search keywords playhouse, storytellers or theatre to find our programs. We will also have direct links available on our Facebook page, as well as answering any questions folks may have about the program,” says Tsfatinos.
. . . . . .
Claiming her experience with performing ended at Richey Suncoast, Tsafatinos loves what she’s doing now, especially when she sees how students are being affected. “One mom’s daughter was signed up — she was singing and dancing and her older brother came with her to the session. Before it was over, he was onstage singing — a real comedian. Their mom hadn’t thought it was his thing at all – he was painfully shy but he seems to have a natural talent for it. He’s a different person onstage.”
. . .