The last time I sat down to give considerable time and effort to this particular writing project, it was the middle of North Carolina winter. I was doing my first residency, at the Penland School of Craft, which offers artists the chance to stay as long as a month between its programming semesters. 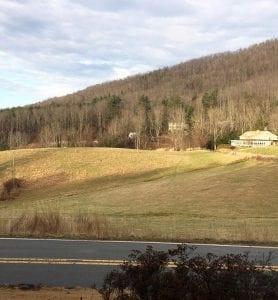 Which, for a newer Florida resident who hasn’t spent much time “wintering,” was a bit of a shock. Every day was crisp, brisk, and sometimes actually freezing. There was zero humidity and on day three of my two-week visit, I rush to the grocery store in town to get more moisturizer for my face. The change in environment was invigorating, not only in my day-to-day travels around campus, but also as I explored nearby hiking trails and streams with my fellow residents.

Now, I’m spending weekend afternoons at coffee shops as I work on this same project. It’s a different experience altogether — truncated, hyper-focused instead of meandering and contemplative.

And the weather is different.

Last weekend, I sat in one of my favorite new cafes (Flatbread and Butter, which I love because it has coffee and wine) and watched a storm brew up and then drop a torrential downpour on the neighborhood shortly after. The ducks at Round Lake across the street were having the time of their lives, but the other patrons all had a cautious, contemplative eye on the storm (which involved a lot of rain going sideways).

As the clouds cleared and the humidity returned, I had a small but mighty epiphany for my work, which centers so much on the impact of water on a community: There has to be more water. Beyond rainstorm-related flooding and tropical disturbances, I need to provide greater indicators of the seriousness of the impact of water on this story. It’s not just a matter of world-building, of creating a reality that’s understandable and believable. It’s also foreshadowing. It’s a way to gently tap the reader on the shoulder and whisper, “You better get ready for what’s coming next.”

It’s that time of year when you can’t go more than a day without witnessing (but hopefully not getting caught in) a brief thunderstorm. Instead of waiting for them to be over and the sun to return, I’m embracing them as a means of inspiration.