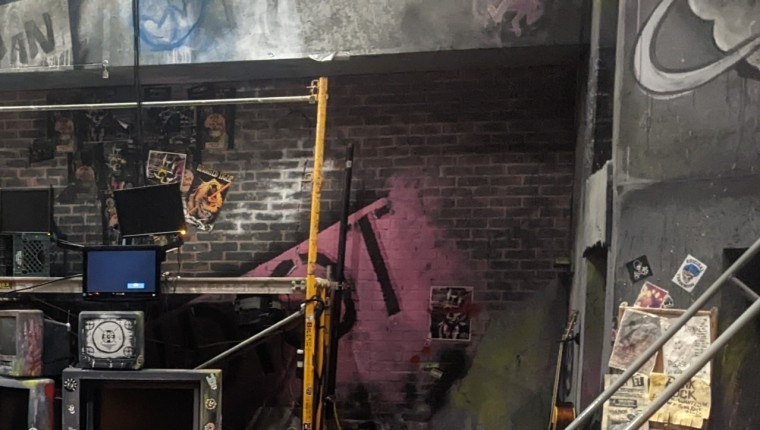 . . .
“Don’t want to be an American idiot. One nation controlled by the media,” Billie Joe Armstrong, the lead singer of Green Day, offers in a snotty, melodic retort to a lifetime of being immersed in the processed sights and sounds of mainstream media.

Backed by pop punk guitar, bass and drums, the song, “American Idiot,” captures the spirit of the eponymous Broadway show, American Idiot, which I saw on Broadway in 2010 when Armstrong made a guest appearance as the character St. Jimmy.
. . .

After an epiphanic moment at the local 7-Eleven, Johnny and Tunny head for the city. Will finds out his girlfriend, Heather, is pregnant and stays behind. Johnny becomes immersed in drugs, develops a drug dealing alter ego (St. Jimmy), and meets a woman whom he loses to drugs and rageful behavior. Tunny becomes immersed in television, believing that military enlistment will give his life purpose and eventually ending up an amputee (and falling in love with his nurse). Will smokes marijuana and drinks away the time he could be caring for Heather and his baby, and she leaves him. They all end up back at home, in suburban “Jingletown, USA,” running into each other at the local 7-Eleven.

The show is punctuated by predominantly high energy pop punk songs with political overtones, like “Holiday,” and some more contemplative and introspective songs, like “21 Guns.”
. . .

. . .
Today, the overarching message of the song, “American Idiot,” and theme of the punk rock musical feel as relevant, if not more so, as they did over a decade ago. We are still, technically, one nation. And, increasingly, we are recognizing how much control mainstream and social media have over us, dividing us in feedback loops of our own reinforced creations.

Like the noisy, guitar amp feedback in punk songs, these media feedback loops are powerful. We are gripped, as individuals and a society, in what has been coined an “opiate epidemic” – the traumas of war persist, and mental health, substance abuse/misuse, and depression contribute to intimate partner neglect and violence that frames the formative experiences of millions.

What else can be done with the range of unpleasant emotions we experience — from boredom to pain to rage to disgust — besides the quick fixes we are sold that anesthetize emotions until they become unmanageable?
. . .

. . .
Green Day comes from punk subculture. Although many people argue over whether or not Green Day are punk, that’s not an argument that I care to have. My formative years were spent at 924 Gilman St., the punk collective where Green Day began and where they were plucked by Rob Cavallo to become the next big thing, a trend that would see bright, poppy punk rock replace grunge music in the mid-1990s, as the MTV generation came of age.

Punk, for many of us who grew up on television, turned on a lightbulb. In fact, Green Day’s first video on MTV, “Longview” (1994), which served as the introduction to the band and to punk for many viewers, shows Armstrong glued to the television, watching belly dancers and cartoons. He sings how he is “so damn bored” that he is going “blind” and smells like excrement. During the chorus, he comes to life while performing with his band and releasing the grip that the medium has over him – taking control of the sights and sounds of his immediate environment.
. . .

. . .
Punk rock could help us break the seemingly impenetrable screen that kept us still and silent. We could play this music, we could scream along to it, and we could be its scene. That’s not to say that it was or has been easy for all of us in the scene — there’s a reason that Green Day were the poster boys of punk – white, presumably cis-het and normatively abled. But in punk, many of us found and continue to find release and community through catharsis.

Catharsis is defined as “the process of releasing, and thereby providing relief from, strong or repressed emotions.” Growing up, I wasn’t able to talk about and, honestly, didn’t know how to talk about various things that ate at me. But pick any number of the difficult emotions and life situations that we go through as teenagers, young adults and adults, and it seemed there was a punk song written or a punk song that needed to be written and could be written about it.

Songs — the lyrics and music — can give cathartic release to the ”ugly” feelings we are taught to push down or feel won’t be accepted if shared. They can help us initiate or make sense of identities that are complex and rich expressions of ourselves, that sometimes we simplify or ignore so we can belong.
. . .

. . .
Many punk songs, like those in American Idiot, tackle historical and personal traumas that history and society have deemed necessary to sweep under the rug but that continue to impact people, such as atomic bombings and domestic violence. In doing so, punk has led many participants beyond the punk scene to historically underserved and marginalized communities.

For example, punk, in a roundabout way, led me to the work I have been doing for the last 15 years on Marshallese musical expressions of U.S. nuclear violence. These songs share intergenerational struggle, pain – and, crucially, cultural vitality and strength. They share means of musical catharsis for Marshallese experiencing the pain of displacement from their South Pacific homeland, for example.

Punk was built in immediate rawness, but like everything else it became mediated. It can offer cathartic release to some groups of people more readily than others. It’s important to recognize which punk bands from which communities get to represent punk in Broadway musicals.

The recent theaterwork Adobe Punk (About Productions 2022), was written by mother-son team, Theresa Chavez and Gabriel Garza (7th and 8th generation Californios). The music is written by Chavez and Nina Diaz (of Girl in a Coma fame).
. . .

. . .
From the outset, the songs became a process of learning and growing. The theaterwork’s narrative showcases the ethnic and gender diversity of the early scene through two female and one male character – Lebanese, Anglo-American, and Mexican American, respectively) – who brought punk beyond a storied yet provincial past that amplifies the 1980s Los Angeles scene as cis-het white, male, juvenile and violent. The characters’ compelling stories explore the challenges of belonging and surviving – literally, culturally and spiritually.

Music director, composer Sage Lewis (composer, music director) incorporated material from the Gene Autry archives — early recordings of Californios and Indigenous communities. As a musicologist who works with underrepresented communities in addition to those in punk, I was excited to hear of the attention to inclusion beyond the visual and narrative-based means. Sound and music provide depths of emotional resonance and connection from the trio as individuals, cohabitants, and a band, to their generational legacies woven into musical and artistic materials, to the house and its historical presence as an adobe building, to the Indigenous peoples that preceded them (and the settlers), and, as one character notes, to the very fabric of the Earth. All of these connections are felt through performed punk music.
. . .

. . .
Two bands, of many, that come to mind when thinking about catharsis beyond Green Day’s American Idiot tackle the issues of healing and self-and-collective care in musical performance and activism.

FUPU is self-described as “a life affirming creative project” in the article “The Punk ‘Radiance and Rage’ of Fuck You Pay Us” (the title speaks to the cathartic vigor of the “all-Black, femme punk band” in live performance). mirrored fatality describe themselves as “a nonbinary Kapampangan-Pilipinx and Pakistani-Muslim performance art duo Mango and Samar, sharing their rituals, altars and medicine through DIT (Do It Together) experimental and healing noise punk…

“mirrored fatality’s intentions for their art is for Queer Trans Black Indigenous People of Color to embody their rage, disrupt the silence and isolation from existing in a white supremacist capitalistic apocalyptic world, and harness collective care, catharsis, and holistic healing. “ (from “Abolition Is…”).
. . .

. . .
There are all types of punks, and, while Green Day and bands that look (and often sound) like Green Day, have dominated the mainstream mediation of punk, Green Day is one band in an entire multigenerational punk subculture, which continues with intensity and momentum, providing catharsis and community – with crucially underrepresented QTBIPOC (queer, trans, Black, Indigenous, Persons of Color) and disability punks.

When I teach punk courses, I begin with other musical genres that punk has instrumentalized and appropriated — musical genres, particularly African American musical genres, such as the blues, that have been cathartic in other ways for the people and communities that played and listened to these songs. I draw on UCLA’s Punk Archive that provides resources for underrepresented punks and punk communities in ways that, I hope, enable students from a myriad of backgrounds and identities to find connection and possibly emotional release through the strength of the artistic contributions of these punks.
. . .

. . .
Ultimately, punk can be catharsis — through screaming along to a song, playing in a band, dancing at a show, marching at a protest, or working to secure funds for marginalized communities. As Brian D., lead singer from the anarchist hardcore punk band, Catharsis, explained in a 2014 article, “We Need More Art That Is Grounded in Real Struggles,” punk can also be just the beginning.

Punk, often considered the purview of the outsider, helps people get feelings out of themselves, form community, and imagine a better world — revolution in practice.

That said, I think American Idiot offers a warning against the seductive powers of media which can lead us astray or right back where we began. Real change takes struggle, work and resolve. It means yelling AND listening, listening to our and others’ feelings and then making commitments to meaningful life with each other.

Listening to ourselves and our emotions in the cathartic act of screaming along to a punk song might not save the world, but it can be a first life-affirming step to break the mediated feedback cycle of sedation, attrition and complacency.
. . .