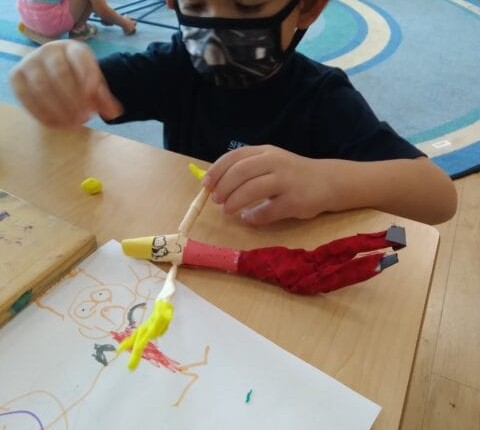 https://youtu.be/m_OlowpOze0,
I am blessed. I get to teach art to four and five year olds. Needless to say, there is no shortage of imagination. What is challenging is trying to harness that imagination so that it can be communicated using different mediums and inspire others.

So I’ve been introducing my class to puppet making, storytelling and stop motion animation. What better way to have children see their story objectively than on a big screen with sound effects? There aren’t many ways that compare.

I showed my students some sculpture making on youtube with wire armatures. Ace of Clay is my favorite channel for sculpting characters.

One day a student brought me a broken paper clip and said he wanted to make Medusa out of this little piece of wire. It took my brain a minute to make the connection that he was emulating the instruction video. So I got him some clay and we got to work. After making 3 separate Medusas, that cracked and broke, I got the idea to make something he could manipulate and play with. We used another paper clip bent around a popsicle stick to make arms. We then wrapped the whole thing in layers of saran wrap so the body could be firm but soft. The skin texture was paper, we used extra cloth to hot glue on as clothing and plasticina for the hands. Now we had a working doll that could be held, and moved without falling apart.

I shared with the kids a video on what stop motion looked like and the process of it before we started on our own stop motion journey.

We set up a scene using blocks and play grass. We had the scene laying on the desk not vertically because the characters really had no way to stand up on their own. I showed the students how to move the character slightly and how to take a picture using the IPad. We used a tripod with an IPad attachment to set the camera facing down over the scene. Two students successfully made an animation. When I asked them “what did they want to happen, what were their characters thinking and how did they want their characters to interact?” they really didn’t know. I didn’t expect answers, I only wanted to get their minds thinking and in turn make the story a little more dynamic.

We ended up with about 130 frames. At three frames a second that is about 10 seconds of animation. With some editing and slowing down of video I was able to stretch the film to over a minute. We added sound and had a nice little animation made by four and five year olds!!

They were so proud. And that brought others to join!

Because some kids had to quickly make props or puppets we used a different method than the first for puppets. This time we used pipe cleaners and wood shapes to quickly make a character and just used some animals that we had in the classroom. The pipe cleaner method is still blowing my mind. Why didn’t I think of it before!? It is much easier for the kids to bend and with clay on the feet we can stick the character to the table. So we also experimented with a vertical scene and background with a random light that I found to make things a little more focused. It was awesome. 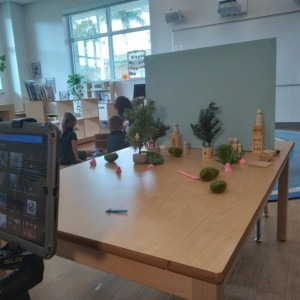 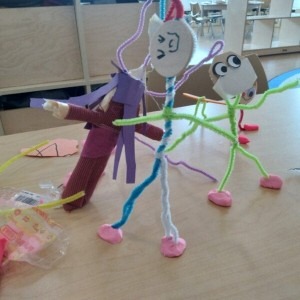 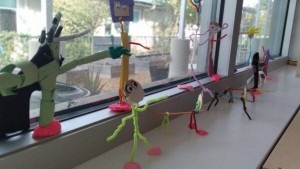 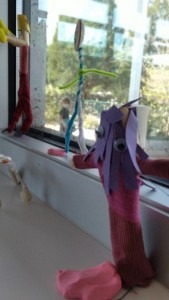 With all that said I am now thinking how can I make a character from my book from these materials. I want it flat yet 3D. It’s a challenge!! I’ll keep you posted on my progress.

Until then, enjoy these stop motion productions from four and five year olds!