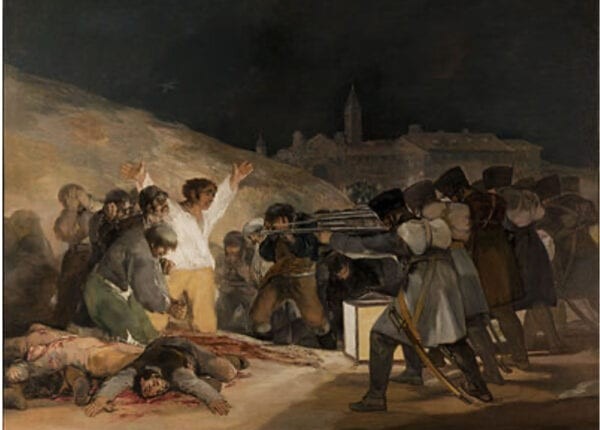 There is no way getting around it.  We live in a very political time.  Even protecting one’s own health and that of others is now a political act.  How did we get to this place?  I, and no doubt you, could go on at some length about how we got here.  The question is what do we do now?

As artists, whether visual, performing or literary, we make art.  Art, as every other act in our lives, has become political.  Of course, political art has always been present.  Sometimes more visible than at others.  In times of war, upheaval, oppression, and denial, political art bountifully emerges.

When I think of political art, I immediately think of Goya’s The Third of May 1808 or Picasso’s Guernica.  Both about the horrors of war and oppression.  Or Adrienne Rich’s poem “What Kind of Times are These.”  Or the music of the 60s and 70s, which still are played as political anthems.  Or theatre from Laurents, Bernstein, Sondheim’s Westside Story to August Wilson’s Century Cycle to Ntozake Shange’s Colored Girls Who Have Considered Suicide/When the Rainbow is Enuf to Tony Kushner’s Angels in America.  These are some of the classics, but, oh, the richness of what we can expect now.

The art Robert Stackhouse and I are making is focused on water and its role in climate change.  Namely, it’s HOT and getting hotter.  We are raising that issue but also exploring ways to mitigate it.  The heat and rising tides of our oceans are particularly poignant when living in Florida or any coastal area.  The warming waters create warming temperatures which in turn make life challenging, too expensive, and extremely unhealthy.  Pandemics in this environment are more apt to occur and have a strong tendency to target those who are most economically challenged and physically vulnerable.  Everything is connected.  So, where we begin in the long run doesn’t really matter as long as we begin and keep going.

What Kind of Times Are These
By Adrienne Rich

There’s a place between two stands of trees where the grass grows uphill
and the old revolutionary road breaks off into shadows
near a meeting-house abandoned by the persecuted
who disappeared into those shadows.

I’ve walked there picking mushrooms at the edge of dread, but don’t be fooled
this isn’t a Russian poem, this is not somewhere else but here,
our country moving closer to its own truth and dread,
its own ways of making people disappear.

I won’t tell you where the place is, the dark mesh of the woods
meeting the unmarked strip of light—
ghost-ridden crossroads, leaf mold paradise:
I know already who wants to buy it, sell it, make it disappear.

And I won’t tell you where it is, so why do I tell you
anything? Because you still listen, because in times like these
to have you listen at all, it’s necessary
to talk about trees.