Yesterday I said goodbye to three ladies I will miss a lot.

The mural was that of three Orishas. Orishas are gods and goddesses placed by Olodumare, the Supreme Being, on Earth to help and supervise humankind. The word is of Nigerian origin and they are an integral part of Santeria and Afro-Latin/Caribbean faith. While I don’t subscribe to any particular faith, I do find great beauty and inspiration in the lavish folklore.

After much reading I settled upon the Orishas Oya, Yemaya and Oshun. Oya rules the dead, she is associated with ancestors, cemeteries, and the wind. She is a warrior and can raise the dead to assist her in battle. She is often portrayed holding a dagger, a black horsetail or fire.  Oshun is the goddess of love, marriage, and fertility. Yemaya is the Orisha of lakes and seas. I feel most centered in or near water which is why I favor her. She is the patron of women and motherhood.  Seashells and the moon represent her. Oshun is the goddess of seduction, love, marriage, and fertility. She is the younger sister of Yemaya and oversees sources of fresh waters such as rivers. She is often represented in golden colors and holds a fan, mirror, or feather. 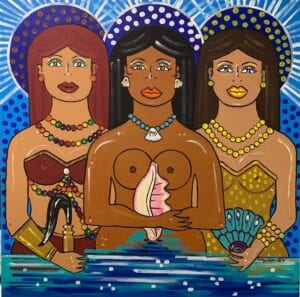 I recently received an email from the couple. They sold their home due to a business relocation. They expressed that the goddess mural was their favorite memory of their St. Pete home and asked if I would reinterpret them on canvas so that they could bring them along. Obviously as an artist I was greatly touched by this and took on the task. Yesterday the canvas was picked up and while I’ll miss the Orishas looking over my studio I am very excited for the joy they’ll bring to my clients in Cincinnati. 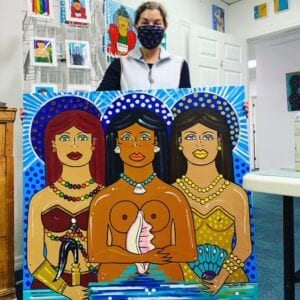