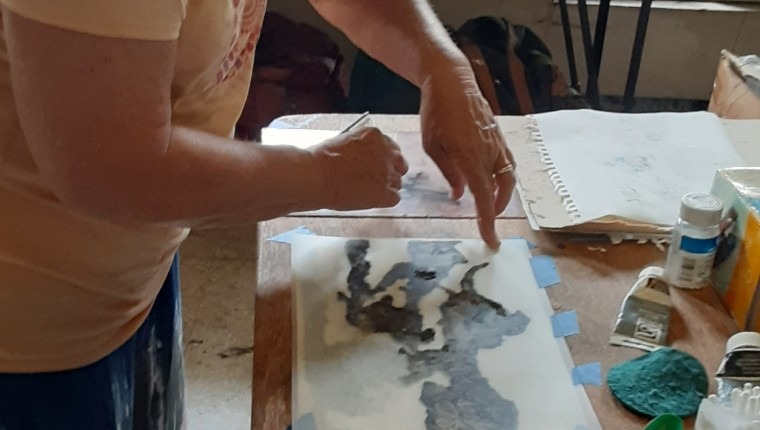 Currently I am preparing new prints for two upcoming shows in June. The pencil studies shown here are for the next series of prints called Cosmos/ Chaos II. In preparation for the new series, I began observing the different formation of clouds during my stay in Jamaica.

At 9:00 a.m. clouds appeared to the north of the island of Jamaica hovering over the horizon line of the Caribbean sea but by 11 o’clock dissipated as the afternoon starting approaching. By 12:00 storm clouds to the southwest of the island started to form over the mountain tops intensifying into the afternoon. Saturday April 16 at three o’clock drops of rain fell on my work and I had to abandon the drawing for the day.

Sunday morning April 17, I started to sketch again, looking north to  the Caribbean Sea but by 12:00 turning southwest to the mountains to the rising afternoon cloud formations. They  moved quickly changing rapidly as I sketched with my graphite pencil marking in the darks, lights, and medium tones of the transforming cloud configurations. The process of collecting information was similar to 1 minute figure gesture drawings I had taught my art students over the years.

The cloud studies later became  references for the completion of my new print series Cosmos/Chaos II. On April 21 I traveled to Judith Salmon’s printmaking studio in Kingston, Jamaica to transfer the drawings onto printmaking paper. There  I experimented with different intensities of black ink, painting the ink onto the plate and  printing it onto paper.  I will continue to explore  different methods of printing,  working eventually to a final print.

These moments of observation of the clouds connected me to the spiritual but also informed me about the volatile changes in the environment. Although ethereal in nature they are comprised of tiny water droplets and /or ice crystals and rain. The challenge is to draw and /or print the clouds to describe their heaviness but at the same time their transparency.