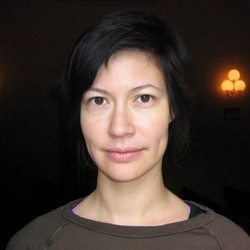 I’m going to Austin in January to make a new piece on dancers at the University of Texas. I’ve been commissioned to make a new work that will be part of a performance celebrating the career of my first modern dance teacher and mentor, Yacov Sharir. I’ll only have 8 days with the dancers, so I’m working on material now. I think there will also be a visual element with video projection, so I am starting to map out what that will look like too.

Yacov is the reason that I became interested in technology. When I was an undergrad in the 90s, Yacov was working with Life Forms and Isadora, and when I was dancing in the Sharir+Bustamante Danceworks company, Yacov and José Bustamante were both exploring the possibilities of dance and technology through video, projection, and interactivity. Because of this, I want to include projection in this piece, particularly an idea I have been thinking about for a long time.

I have been moving away from abstract animations of lines and working with footage of birds. The last solo I made for myself used a rough edit of bird footage I recorded – I am really interested in the line of energy the birds create through space, especially when there is a change in direction. What I am going to do is use three small hand-held projectors to track the birds in space, but intermittently. Imagine there is an image of birds flying in the upper left corner of the upstage cyclorama, the birds change direction and veer downward out of the viewing field. That image winks out, then a new image appears bottom center of the birds, picking up the birds in their trajectory. Whenever the birds change direction, the image will disappear, then reappear, catching and showing the birds at a new point in their path. I am really interested in physicalizing lines of energy through space, and the birds in flight are a way of highlighting that.

Another big part of this piece is my fascination with the Cassini satellite that crashed itself on Saturn. The images that Cassini took are incredible, and I love this video that was in the NYTimes:

I find it incredibly moving, the grand finale of Cassini. The satellite slingshotted off of the moon Titan and used its gravity to make 22 dives through the rings before it entered Saturn’s atmosphere, disintegrating into the sky after 20 years in space. So 22 feels like a magic number, and I want to incorporate 22 in an many ways as possible. First of all, I’m making 22 movement phrases of varying lengths (I have 4 so far), and I want to work 22 into the structure too – maybe 22 passes, or 22 beginnings, or 22 circles, or 22 gestures, or 22 duets, or 22 falls, or I don’t know what yet. Maybe 22 bird image locations. We’ll see.

Movement-wise, I’m also working with trajectories and physicalizing lines of energy, which tends to have a feeling of carving. Also working with the idea of slingshotting, both of my body through space which feels like an anchor followed by a toss, as well as within my body, slingshotting from one body part and resolving the impulse through another. I imagine I can feel one of the moons traveling along the inside surface of my skin. I am excited about this. (Also too, because when I go to Austin, I will also have my first studio session with my friend Kimberly the poet for our new project I talked about last month.)