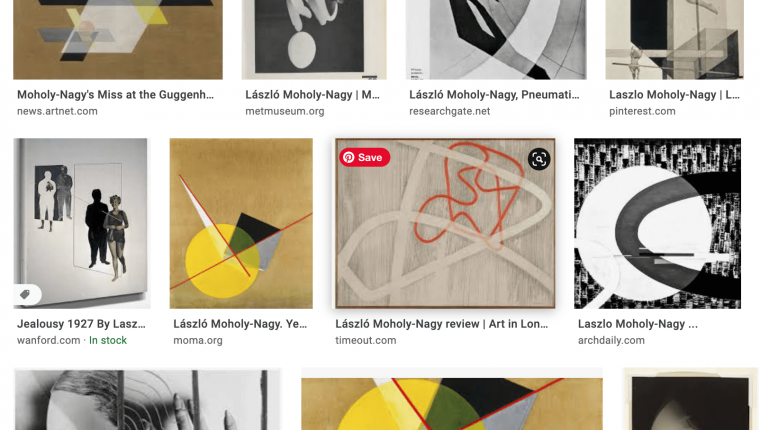 I am not. That is to say, I’m writing well after the inspirational moment has passed, not directly after the inspiring moment in question. Surely, a bit of spark and enlightenment have perished in the week since it happened, but the essence of it lingers and I still feel the gravity. It was that exciting!

My mentor and I decided to use one of our sessions to chat about some of our favorite artists, or at least, current favorites. I don’t think I’ve ever remained completely loyal to just one or two artists, though my favorites always hold a special place in my heart and mind. But at any given moment in time, my favorite artists will reflect my spirit at that moment. In essence, they change with me and with time, and are given flight the moment growth occurs. Which is now.

I chose Lazslo Moholy-Nagy as my first. Turns out we both love Moholy-Nagy and ended up discussing him and him alone for about 30 minutes.

“The negative space. I think that’s what gets me.”

Moholy-Nagy is a fine artist, but his works have the Bauhaus aesthetic that very much incorporated design and function into artistic process and expression. The Bauhaus-affiliation is in and of itself evidence of design thinking in fine art, and certainly Moholy-Nagy’s works demonstrate this philosophy.

We both agreed that there is often a battle between art and design. Not between the fields themselves, they are sure of where they stand, but between people who don’t see them as separate. I think they are. Now, I believe they can intersect, but that has to be the decision of the person creating. To complicate things further, we have the Bauhaus philosophy, which dictates that there is no barrier between fine art and commercial art. This is why Ry and I talked about it for much of the conversation and could have kept going.

Ry’s artist was Richard Tuttle. Tuttle’s work is elegant, daring, and organic. At times so simple that you ask, “how can it simultaneously be all of those other things?” I immediately thought of local artist Cynthia Mason, whose work I recently saw at the Gallery at Creative Pinellas. The huge, museum-like space is filled with incredible works, and when we entered the main space, my eye instantly and unwaveringly leapt to Mason’s works, and I could not stop stealing glances as we did a gallery tour to imagine my own work in the space for the Emerging Artist Show later this year. When I brought this up to Ry, his eyes lit up. He, too, loves Mason’s work and he had even connected with her to do a studio tour.

“Respect for the material.”

Something both Tuttle and Mason share. You imagine they spent time with the material, studied it, manipulated it. In a way, they nurtured it. That’s what I saw in Mason’s piece, Draped Structure X.

“It’s a piece of canvas with holes.” “There’s a chain draped over it.” These are true statements, but to take them as absolutes would do a disservice, commit an offense to the artwork itself, which is alive.

“Having an experience with the material.”

I love this statement, because it allows for the material to be a work of art, not just a medium, but the art itself. To find peace with material being the subject matter is to give credence to material, and to develop a relationship with it. Now we can take our time with it, give life to the full potential of it. I have found myself spending more time with material. The paper I’m making, the media I cut, the fabric I repurpose. To give credence to material itself… now I believe I have embarked on a fully sustainable project.