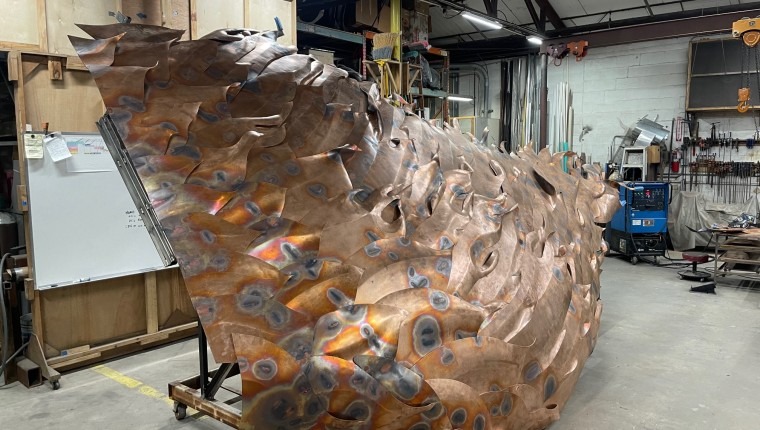 He gained a following in the Tampa Bay music scene as the founder and frontman for Redfeather and drummer for Set & Setting. As Mountain Holler, Mark Etherington has recorded a breathtaking EP, Entheogen, and is gearing up for what’s sure to be historic show at the Gasparilla Music Festival.

Mark Etherington stops even the most jaded music listeners in their tracks with his heartfelt howl. Performing under the dewy fresh moniker of Mountain Holler, the singer-guitarist draws us in with his searing honesty, spare arrangements and atmospheric resonance.

Creative Pinellas caught up with the St. Petersburg-based musician to find out how he has refocused his energies and creates.

Correct me if I’m wrong, but I got the impression that you’ve had somewhat of a spiritual reawakening — like you had taken stock.

Well, instead of saying those moments were “spiritual re-awakenings,” I’d say I’ve had moments of continuous, “spiritual awakenings.” Spiritual epiphanies perhaps (laughs). Once I overcome emotional, physical or spiritual hurdles in my life those lessons tend to stay with me and remain imprinted on my day to day perception of myself and the world.

Did those sentiments relate to having been in four bands at one time? Are you still involved with any of those other projects?

I would say that being as busy as I was definitely played part in the pushing of myself to new boundaries and taking stock of my well being. I was unaware of how much I was running myself into the ground at times and how thinly stretched I was becoming. It really affected my emotions and relationships with people and I finally had to be honest with myself about my situation. Everything worked out well in the end and I wouldn’t change anything that I had done, but playing in multiple projects, working a full-time job, being a good dog owner, a good boyfriend and trying to have a normal social life all at the same time was a bit crazy.
I still remain friends with all of the people in the other projects and am really glad to see them still working hard and moving forward but at this time I know it is my path to focus on Mountain Holler with a whole heart and mind.

Did you make a conscious decision to streamline your energies a certain way when you formed Mountain Holler?

Yes and no. When I dropped out of USF in 2011-2012 to focus more on music I think that was the beginning of channeling most of the energy I had towards Mountain Holle,r but it didn’t come to fruition immediately. I didn’t really know what I was doing, to be honest. I had an innate feeling that playing music was my purpose here and music has always been my way of channeling all types of experiences in my life, but there was no plan. All I wanted and still want is to play music first and foremost for myself and then for whoever wants to listen. I didn’t know how to book shows or manage myself or any of the intricacies that come with being professional; I just followed what felt right and everything seemed to fall into place. It’s been a lot of “envision and manifest” practice for sure (laughs).

Around 15 years ago, I heard My Morning Jacket’s album, At Dawn, the first time. It had a folk majesty that resonated with me like nothing else — until I heard the tunes from Entheogen. I don’t wish to draw comparisons sound- or style-wise, but can’t help but wonder what you used in the studio to create a similarly stirring mood …

That album is amazing! … I used a combination of my TC Helicon Mic Mechanic reverb/delay pedal on my vocals and a modulated “cathedral” reverb setting as well as layering multi-tracks of the guitar and vocals to add depth and warmth.

I looked up “entheogen” — according to Wikipedia, it’s “any psychoactive substance that induces a spiritual experience and is aimed at spiritual development. This terminology is often chosen to contrast with the recreational use of the same drugs.” What inspired you to choose this term as a title?

I have always been fascinated my shamans, medicine men/woman, witches, sorcerers, etc that use naturally grown plants and substances as tools to embark on vision quests, healing and so on. When I was 19 or so I had my first psychoactive-induced experience and it was so beautiful and informative that it changed me forever. I have done my fair share of “journeying,” mostly happening on solo hikes/camping trips in state-parks around Florida. I used these experiences as tools to learn about myself, my community and the human experience in general. Eventually, I came across the word “entheogen” at some point in my research and found that music, both played and experienced, can be a type of entheogen and that perhaps we ourselves, when disciplined in meditation or other means of self-awareness can, in fact, be entheogens for ourselves and other people. I had been wanting to use the term as an album name for some time and when I finished recording these songs and was in the process of getting them available to the public the title just made sense. The creative process of making these songs, and the majority of my songs for that matter, have been tools used through my self-discovery. A type of conduit if you will. So performing my songs always act as a type of entheogen for myself, and maybe they can be that for other people too.

To what extent are the tunes on Entheogen autobiographical?

Oh … all my songs are autobiographical (laughs). Each song I’ve written that I still keep in my performance catalog is the result of going through something and utilizing my expression of music as a coping mechanism. Every lyric comes from a place from within and is a reflection of myself but I think can also be interpreted by other people to reflect something unique happening in their lives as well. I find myself singing about the trials and tribulations of life that I experience and I know that other people have or will have those same types of experiences as well, in some form or another.

The line in “Sparkle,” “It’s okay, you know — now, it won’t be the same” feels like an anthem to me — it just about made me tear up when you sang it live. I’m sure it does with anyone going through a traumatic event or major life change. At what stage in your songwriting/performance process do you realize the impact of your songs on others?

I don’t know, It varies I suppose. I never write a song or lyric with the intention of attempting to impact another person. I write to help myself deal with things and sometimes lyrics will come out of me that make me cry in the writing process or make me motivated or what have you. These tend to be the lyrics people approach me with and tell me resonated with them the most. It is honestly the most humbling feeling when someone tells me this or that I said or sung made them cry or have some sort of physical reaction because it makes me feel like I’m not alone. Like somehow the suffering and process are justified in knowing that it originally helped me or affected me and is doing the same for another. It’s a wonderful feeling!

Who are you making a note to catch live this weekend at GMF? You must be excited playing at a fest with so many great artists.

Oh man, there are so many awesome acts performing GMF that I’m excited about including some wonderfully talented friends of mine. Most certainly at the top of my list are Father John Misty whom I’ve been a fan of since his pre-Fleet Foxes days when he was releasing dark, emotional tunes under J. Tillman. I still can’t believe Spoon is playing … Warpaint, The Roots, Fr33dback, Kristopher James, Acho Brother, Brother Cephus, Ella Jet, Break Science and so many others. It’s a terrific lineup of local and national acts.

Future performances include Wild Rover Brewery on March 24; on March 31, Etherington performs at Infinite Third’s tour kickoff show at The Movement Sanctuary in St. Petersburg, and he goes back outdoors by the water — on the Pinellas side of the bay — for the Safety Harbor SongFest on April 7.