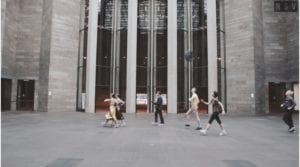 Monica Bill Barnes & Company reimagine the museum tour, creating a physical way for audiences to relate to the finest art in the world. Participants join the company in the early morning, before public hours, traveling through the museum performing choreographed exercises in the galleries.

The Museum Workout disrupts the normally contained museum environment, invigorating participants by creating a physical relationship to the art of the ages.

The everyday life of a dancer is a marathon. Yet, the dancer onstage portrays a life of ethereal and eternal beauty — the sweat not entirely obvious, the realities of aging almost always absent.

Co-created by choreographer and dancer Barnes and writer Robbie Saenz de Viteri, The Running Show sprints headlong into what it means to dance —  both from the perspective of a classically trained dancer and a curious, outside spectator. The show opens to the rhythms and familiarity of a live sporting event and touches on the autobiographical and evolutionary nature of a dancer’s career.

“[Dance] is an art form that we often admire, but one that does not often ask the audience to empathize with the dancer,” says Barnes.

“Although our training and backgrounds are different,” Barnes explains, “we share a commitment in making shows that welcome the audience into the experience through unexpected ways. Robbie and I are being truthful about what is happening onstage and who we all are dancing, sweating, striving, succeeding and falling short.”

Barnes is known for stretching the limits of American contemporary dance with ruckus-raising theatricality, humor and empathy. In 2015, she premiered Happy Hour at HCC, an after-hours office party turned movement spectacle, where she and dancer Anna Bass wore suits and played lonely, overconfident men in a subversive send-up of sexual politics. The work went on to receive a New York City premiere and international acclaim.

Barnes and Saenz de Viteri appreciated the space to workshop and play with Happy Hour in Tampa with the support of HCC Dance Program Director, Christina Acosta.

Acosta is looking forward to witnessing how their return with this residency will open up the collaborative process to students and area dancers from both sides of the Bay.

The performance uniquely involves dancers from ages 7 to 84. In each new city, Barnes and her team teach the show to a new cast and tailor it with interviews and stories shaped by Saenz de Viteri, who narrates the performance like a sportscaster, and like a children’s book.

After a week of eight-hour rehearsal days, the culminating performances will explore Barnes’ aesthetic vocabulary and tell the story of dancers in our community.

“I think it gives [our dancers] an opportunity to really embody the work that she does and the fact that they have to learn the material in a week is pretty awesome,” says Acosta.

So far, over 100 dancers have been a part of The Running Show as the piece continues to tour. Among this iteration’s cast will be Tampa City Ballet’s young dancer, Anjana Quintana and lifelong dancer and choreographer, Paula Kramer from St. Petersburg.

While Barnes and Saenz de Viteri say the two-year process has made for monumental changes and small shifts in both the choreography and writing, the baton gets passed in each new city and the race runs on.

“The choreography is really alive and responding to the abilities of each cast,” says Saenz de Viteri.

“It’s been true so far that each group’s impact goes beyond that one week. They leave an indelible impression on the show. There will be a certain move that a student did in a certain way or some story that I told about someone that ends up sticking around in the next version of the show.  Everyone that we’ve worked with has left their mark on it, in some way.”