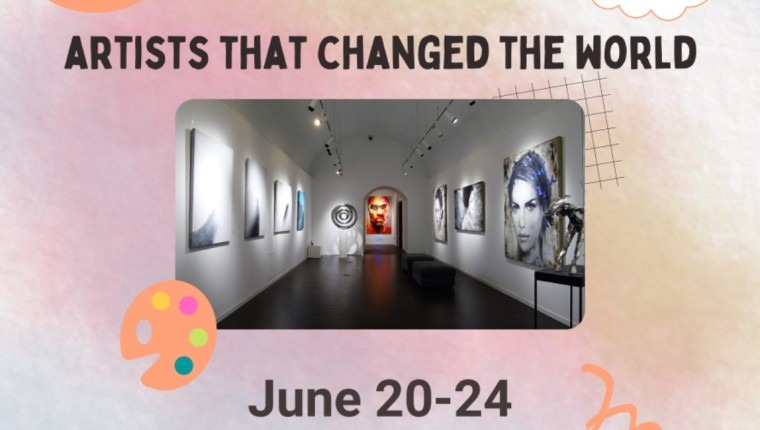 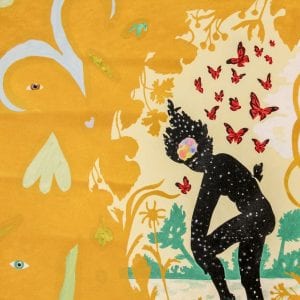 It may be high-time to reclaim utopia from the optimists.

Originally the “u” in utopia referred to the Greek word οὐ (“not”) before being corrupted into εὖ (“good” or “well”), literally transforming an idea of “no-place” into “good place.” Once meaning a land or society that didn’t or couldn’t exist, today the word largely signifies an idyllic potential reality. I’m certain it’s more than the pessimist in me that believes times and seasons demand utopia be placed back out of reach—there is a certain endearing honesty in the admission (and, besides, there is a radical pragmatism in demanding the impossible.)

I can’t and don’t intend to say with certainty that this is the utopia artists Mark Thomas Gibson and William Villalongo are aiming from or for (if they do at all), but it’s the one that the current exhibition, “UTOPIAS”, at Tampa’s Gallery 221, brings to my mind (Disclosure: I am on the advisory committee for Gallery 221. However, I didn’t participate in any stage of this exhibition).

Gibson’s work adroitly wields the visual language of comics and makes full use of its strengths—composition and framing, movement, rhythm, narrative, it’s bold use of color and bolder use of austere blacks and whites. This is paired with Gibson’s “multipartite viewpoint,” as he says in his artist statement, self-described as “a black male, a professor, an American history buff and comic book nerd.” In the context of the comic book-like imagery of his paintings, prints and books featured in the exhibition, this multifold perspective imparts the simultaneously epic and intimate quality of a compelling third person narrator.

This may be most forcefully demonstrated in the united quadriptych painting by Gibson, Freedom (1-4) (2017). Based on a scene from his book Early Retirement and created before the 2016 election, the painting is unsettlingly prescient. It calls to mind the countless rallies, marches, protests and counter-protests of Charlottesville, in response to police shootings, for Black Lives Matter, women, climate change, immigration, Standing Rock, gun control and the list swells with each passing month. The composition is a turbulent swirl of limbs grabbing, striking and tripping; broken glass; torn fabric and its center a black boot poised to step down on the head of a prone figure.

This painting is not a battle of peaks and valleys, eventual victors and victims. It’s a singular roiling sea.

Gibson writes in his prologue to Early Retirement, whence this scene first appeared, “It is my hope that this book stimulates you to think about your relationship to your community and society as a whole. Are you truly contributing to create the future that you claim to desire, or are you passively allowing it to fall apart?” 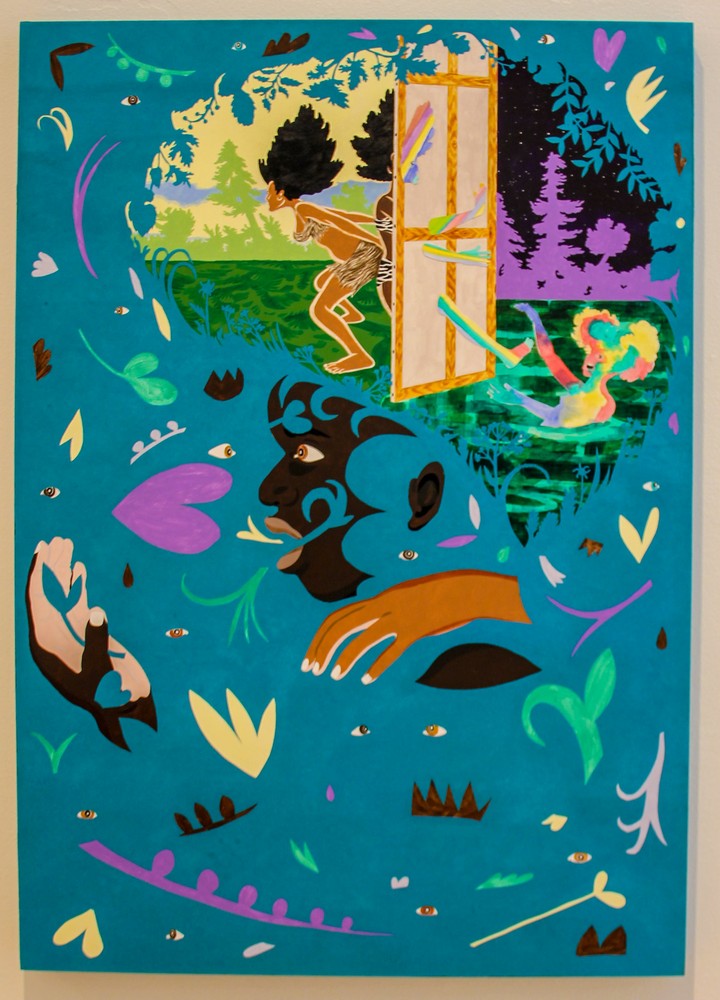 Though perhaps not as unambiguously, Villalongo also makes extensive use of narrative in his work. His paintings in the exhibition capture seemingly idyllic scenes of playful abandon, reminiscent of Rococo settings. Figures are frequently depicted bathing, wading in bodies of water amid tranquil natural surroundings. The vignettes, painted in acrylic, emerge from behind velvet flocking intricately cut as ivy, grasses and other fauna, as if the viewer were a voyeur peeking through bushes. The setting distills the dual meaning of utopia as a good place, as well as, inaccessible behind the flaming sword of the picture plane and veil of velvet, no place.

In the context of Gibson’s Freedom (1-4), Villalongo’s paintings feel vaguely premonitory in the way Rococo does now of the French Revolution. Unlike the Rococo, though, the figures of Villalongo’s paintings are not engaged in frivolous diversions. They appear to be (literally) self-actualizing, (literally, again) keeping their heads above water, simply surviving. Even when in play, the scene isn’t trivial. Some relief from contemporary anxieties such as sexism, racism, body image is poignant and touchingly vivid.

The exhibition is small (the show would’ve been served well by more work by Gibson), but there is much more that is not touched on here and it is affecting, all the same. Utopias, both οὐ and εὖ, have always been a means of collective orientation—benchmarks, landmarks, wayfaring signs guiding us toward the society we dream of being—and I can’t help but be afraid we’re lost and wandering further afield every day. But alone in the gallery, there clearly are lived experiences to understand, ambitions to aim for and crowds to find myself in. We may never get there, and I may never get there, but I can at least begin to orient myself.