When David Warner asked Helen Hansen French and I last fall to come up with an outdoor dance-theatre piece for  Creative Loafing’s GASP! Festival, an amazing celebration of the arts to be held on March 16 at Tampa Museum of Art, we didn’t realize what an evolving and exciting collaboration Air-Earth-Fire-Water would turn out to be. 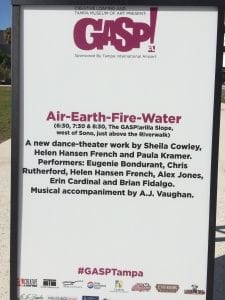 I originally wrote the scripts thinking we would have a different actor for each piece. They weren’t in any particular order, and there wasn’t an Air piece – that came from David telling me Tampa International Airport was the festival’s big sponsor, and would it be possible to write something that could be performed there?

The airport performance didn’t work out but Airborne did, a motion scientist stuck in traffic and imagining he’s flying. When I signed Chris Rutherford up, I told he would definitely fly, one way or the other.

The sequence came from early conversations with Helen and Paula, talking about movement. Helen instinctively sensed the tempo of each piece and quickly set them in order from frenzied to calm. It came as a surprise to me that the pieces flowed so well, starting with a startling traffic jam made out of dancers and Chris hauling a large blue plastic kids’ car up the hill as the dancers emerged.

And when we needed to scale down, and ask Eugenie and Chris to each play two different scientists, the sequence took on a romantic undertone I hadn’t realized was there. Eugenie discovered connections in the text that she texted me about while I was in Phoenix, and I urged her to talk with Helen and Paula at rehearsal, who shaped the last moments around her ideas.

Helen and Alex invented the hilarious traffic jam around Chris, with dancers driving slow and driving fast, and hilariously slamming on the brakes. When Erin and Brian arrived they devised the four-person “minivan” – and I thoroughly enjoyed the many serious discussions of how to go from minivan to the “ta dah.”

Airborne also included Eugenie’s one fleeting drive-by as Chris said the word, “meatball” – and that became a frequent verb. As in, “Okay, now Eugenie will meatball by, and Chris will toss the lab coat.”

Airborne led to the Earth piece, Physics Boogie, where Eugenie enticed a bored physics class to demonstrate principles of physics using dance. Our dancers illustrated momentum, centrifugal force and gravity with wild invention, as Chris played the student who fell asleep and became an accidental illustration of inertia.

The transition to the Fire piece, Flicker, turned into a Pasodoble of Paula’s design, with A.J. playing as he strolled among the couples and Eugenie and Chris bullfighting with the lab coat before Chris slips into the coat and steps into the role of a lonely quantum physicist who spends all day calculating the precise unpredictability of life.

The apple in the script turned into Paula’s vision of a lovely tree made out of dancers. And in this last rehearsal the tree became a place where Chris could hang his lab coat.

The words of all the scripts had been honed down to bare essentials in the first few weeks. The scripts were written without movement cues – so all the movement and the visuals came from the dancers and the actors using the words in the script as springboards and sparks.

Our dancers and actors are all amazing storytellers. And because the movement always grew from words, the dance was never added-on or sitting next to the story – the dance grew from the story and became the story as much as anything the actors said out loud.

I had so many people come up afterwards, even weeks later, and say they never understood modern dance. . .  but they understood Air-Earth-Fire-Water clearly.

The Water piece, Tidal Pulls, finds Eugenie as a coastal biologist who feels the tug of distant galaxies in the shifting of the tides. It’s a quiet piece I wrote for Eugenie, and feared would be a let-down at the end, as the pace slows down considerably. But Tidal Pulls turned out to be the most moving moments of all, as Eugenie wades through blue parachute waves that really feel like water, looks up at the stars and beckons Chris into the water.

The week I was in Phoenix with The Burlesque Astronomy Play, A.J. Vaughan improvised a score on viola, including hilarious viola car horns and brake noises. By the time I came back for the last week of rehearsals, the music was growing from the movement and the words and it was hard to remember any of the pieces silent.

Thanks to A.J. and his compositions, the Air-Earth-Fire-Water sequence was in full force the Tuesday before Friday’s GASP! Festival.

We had a dress rehearsal Thursday morning on the slope outside the Tampa Museum of Art, where Helen caught me up on the 45 minutes she and Alex had spent talking about the brand new Doors piece I wrote for the two of them a few weeks ago, and I madly took notes.

Air-Earth-Fire-Water on Friday night turned out to be a signature event of GASP! – with signs posted with all our names.

The sequence was scheduled for 6:30, 7:30 and 8:30 p.m. The first show at 6:30 was in blazing sunlight. I didn’t think that anyone had noticed that we started, but halfway through Paula nudged me and pointed at the crowd that had gathered, all paying close attention.

At the 7:30 show the sun started going down, flaring up behind the parachutes. Even more people gathered round to watch, which was lovely.

At 8:30 the sky was dark, the hill lit by glowing lamps. It was tricky to hear all the words outdoors with wind and noise and passers-by on the Riverwalk stopping to wonder what was going on, but all three performances were gorgeous and got a rousing response.

The whole process was a beautiful adventure, with the script as a starting point and everyone’s ideas helping to build a spectacular, funny and moving performance.

I’m grateful for the chance to create work with such a wonderful team of artists, and all of our electrifying, energizing explorations.

And we’re honored that the first table reading of the scripts on January 24 was counted as part of International Women’s Voices Day 2018, with an age range in the room from 6 months to 82.

Of course this week I’m also madly reworking the story of The Burlesque Astronomy Play, adding layers of backstory and attempts to join the astronaut training program.