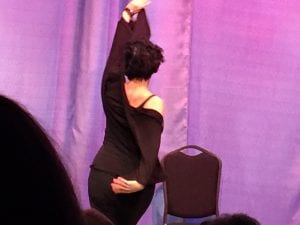 Phoenix Theatre chose The Burlesque Astronomy Play out of over 500 submissions, as one of four scripts they’re working on in their wonderful annual Festival of New American Theatre.

The play celebrates the vibrant interplay between scientific and artistic exploration – with dance, visual art, astronomy and science magic. It’s focused on the challenges that women face when balancing career and femininity. 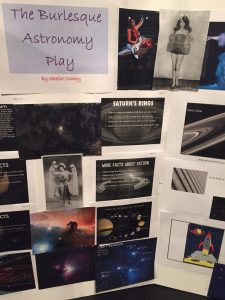 I did a lot of research on burlesque and the Cassini mission to Saturn. The main character is an astronomer who’s never been comfortable with her femininity, always outnumbered by male colleagues. Andi is a grown-up nerd girl who fell in love with science as a child and totally concentrated on her career. She’s started feeling like she’s missing something and secretly been going to museums. When she runs into burlesque dance at the Art department, a painter is intrigued by her and tracks her down in the Science building, which is where the play starts.

The character of Cal led me to a lot of reading on Cubism and modern art. Cal keeps finding connections between art and science that surprise them both – and Andi starts exploring femininity like a laboratory experiment.

The script takes place in her office, with burlesque dance numbers, projections of astronomy, and abstract art that lets a theatre company collaborate with a visual artist. Andi’s colleague Fiona never got her PhD because she got pregnant – now Fiona’s trying to keep her artsy kids interested in science and trying out onstage experiments.

When Andi finds out she’s pregnant, she has to decide whether motherhood will derail her career.

The script is different from any I’ve written before, extremely visual and despite the science, more imaginative than strictly realistic. I worked on the play in St. Pete with the wonderful Eugenie Bondurant, Vickie Daignault, Becca McCoy, Jim Rayfield, Lisa Powers Tricomi and Jim Wicker off and on in 2015-2016, and got a lot of helpful feedback and enthusiasm for blending science and art. 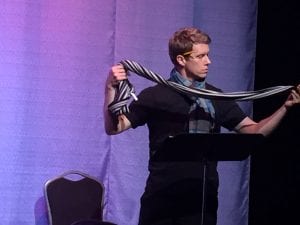 During those years, the script had a different attempt at a meaningful title each time the actors saw it, until Jim Wicker finally told me, “This is the worst title yet.” And he was right.

By then I was so frustrated with the title that I said, “I give up, I’m going to call it what I’ve been calling it to myself all along, The Burlesque Astronomy Play.” 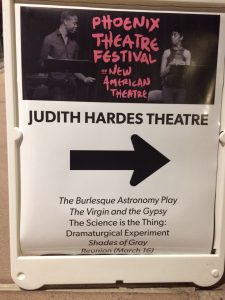 But I knew the play was a wild idea and when I sent it to the Chicago Dramatists Script Lab so Dana Lynn Formby could give me detailed dramaturgical feedback, I expected that she’d tell me I was crazy and should write something more practical.

But Dana truly loved it, and gave me incredibly helpful feedback on the structure and the pacing. I worked on rewrites and The Burlesque Astronomy Play had a reading at Chicago Dramatists last year.

I did a lot more rewrites and sent the script to plenty of development opportunities. And set it aside while I worked on Flying and Trio before their productions, and started two other full-length scripts. When Robbie Kolby Harper, Associate Artistic Director of Phoenix Theatre and the Festival Director, called to tell me The Burlesque Astronomy Play would receive a weeklong workshop in March, I didn’t realize it was the biggest regional theatre in the Southwest, and how amazingly great they are with new play development.

The theatre flew me out, put us up in an apartment and gave us a car, the first time that’s ever happened. And best, they gave me an excellent Equity cast, terrific director, dramaturg and stage manager for a week, with 20 hours of rehearsal and two staged readings. 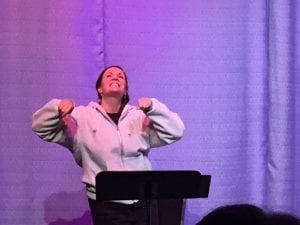 Phoenix was surprisingly like downtown St. Pete, bursting with beautiful murals and public art like this amazing statue made of melted weapons. Our neighborhood was walkable to coffeeshops, cool restaurants, art museums and the theatre.

When I arrived, I couldn’t think what to do with the script or where to go with it, and hadn’t looked at it for months. But as soon as we started working and the actors started speaking, things started burning, in a good way.

The director Bill Partlan was just wonderful, a gentle, quiet, funny guy who was so sharp and insightful, and got almost all my subtext immediately – and anyplace he didn’t, that was clearly something I needed to fix. He teaches at Arizona State University and has worked on plays at the legendary O’Neill Theatre Center for years – he directed August Wilson’s workshops there of Fences and Ma Rainey’s Black Bottom. Bill gave the actors – and me – gentle guidance that helped us find good answers to the questions he was asking. 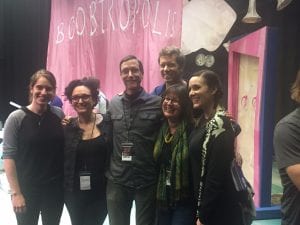 At the first read-through, the very sharp dramaturg, Kirt Shineman, would stick a post-it note on my script every page or so with a note, or a line that I needed to look at. By the end, I had 40 or 50 post-it’s on my script.

I came back the next day with a new draft that was both much simpler and more detailed, and we started up again. Halfway through, I hadn’t gotten any post-its. Then Kirt stuck one on my script and I thought, drat, what did I miss? But it just said, “I’m liking the changes.”

I wound up writing all day every day and we rehearsed 5 hours every night. I kept carving away moments that weren’t needed, clarifying lines and adding more detail. We were working toward a reading at music stands, thankfully stretched a bit to accommodate the dance numbers and Fiona miming the experiments.

But when we started talking about the dances and the soundscape that melds space exploration and burlesque, Bill really wished we had some sound. 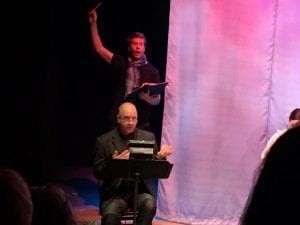 I said, I’ve got a terrific sound designer sitting in our apartment. Bill asked me to text my husband Matt, who got to work and started Dropboxing audio files to stage manager Alex Koszewski. Suddenly Andi had groovy old-fashioned tunes to dance to and the soundscape started taking shape, skillfully constructed by Matt from a lot of different moving parts that turned into a gorgeous atmosphere.

Bill asked for adjustments to the timing, I texted Matt and new files arrived during rehearsal. Everybody loved the sound and it made a huge difference.

Every day I came in with new pages that got printed out in a different color, so that by the end everybody’s scripts were rainbows filled with hand-written changes.

Angelica Howland, who played Andi, is an amazing actor and one of the readers for the festival, who’d put a lot of thought into her role. She was just incredible – you could see all the shifts in emotion, all the humor and the pain, her emotional journey was vivid every time. And when Angelica climbed up on a chair in her everyday clothes and started figuring out her own idea of a burlesque dance, it was incredible – the first time anybody’s tried that and it’s clear the dance numbers are going to be terrific highlights when the play’s onstage. 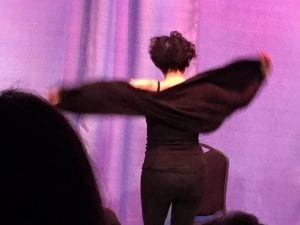 David Dickinson as Cal was hilarious, charming and moving, perfect as the artist who knows more about science than you expect, paints naked ladies for his job but is not so comfortable painting naked men. And Maren Mascarelli as Fiona was so hysterically funny in everything she did, from her comic delivery to miming launching an imaginary boomerang and squeezing glue from bottles to make putty, that both readings got a lot of laughs throughout.

The Phoenix Theatre Festival of New American Theatre’s been going on for 19 years and they take the work of helping playwrights develop scripts seriously. I’d never had two readings back to back before, but having two staged readings was so helpful, since you don’t get a chance to rewrite the script in between and you get to see the same script with two different audiences. And our first reading didn’t get that great of a response. 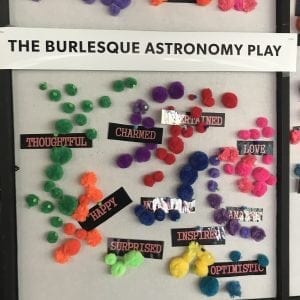 Everybody liked the humor and the connections with science and art, but some older men didn’t think the choice between career and motherhood was a strong enough question. Kirt and I talked for a long time afterwards about how to strengthen the conflict and Andi’s choices and make her transformation visible onstage. His questions helped me find a lot of good ideas for the next draft.

He also had the excellent suggestion of setting all the visuals aside and just writing the story of the play as a story, so that I know exactly what’s happening and why. I started percolating.

Surprisingly, the brief moment in the script where Cal gathers his courage and touches the burlesque props, affected people in both readings – with the thought that that angle should be more fully explored.

Phoenix Theatre hired a terrific chemistry teacher, Chad McCluskey, to do the stage experiments for the Saturday crowd. Chad put a good amount of research in and tried things out at home, and charmingly explained the scientific reason everything was happening. 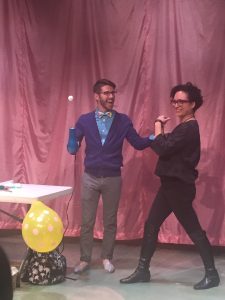 To my surprise, the experiments worked better than I thought, except for the one we almost did during the reading, a balloon shooting across the room on a string – which seemed a lot simpler than it turned out to be. But the ping pong ball balanced perfectly on hot air from a hair dryer, the egg made a great noise as it got sucked into a bottle and the homemade smoke machine was just amazing.  Chad tried to make a pickle glow as the grand finale and it actually caught fire – and burned with six-inch flames for several seconds. I made a note of that, since it sure changes the ending.

So now I’m fired up rewriting The Burlesque Astronomy Play. And along with all of that this week, Air-Earth-Fire-Water is rehearsing for the GASP! without me – but with the amazing viola player and composer A.J. Vaughan, of the New Vaudeville act Tank & Tilly, and he’s a terrific addition. 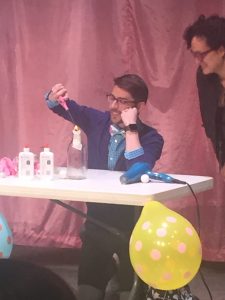 A.J. helped Paula and I out at GASP! 2017 when actor Becca McCoy and dancer Crystal DelGiudice were improvising together for a promotional video shoot before we  started rehearsals for the piece I was commissioned to write last year, which turned into my first dance-theatre piece, I’m Here, and the first time I got to work with Paula Kramer as my ever-inspiring choreographer. 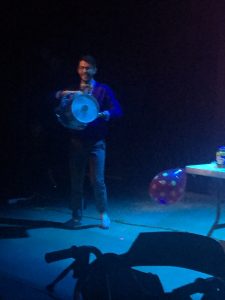 We met A.J. at the shoot and he kindly shared his lovely European circus-style music, which is what Becca and Crystal are moving to on this video.

Also this week, Trio is having a table reading with the cast and creative team in Austin, as rehearsals begin for the April premiere at The Filigree Theatre.

That same night, I get permission to be late to the Burlesque rehearsal, since the 12-week online class I’m taking from the Dramatists Guild begins tonight, “The Artist as CEO.”