I Need to Know: The Lost Music Interviews 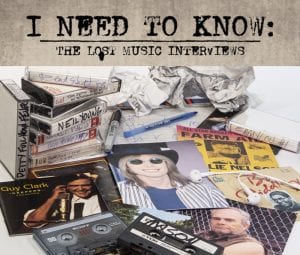 Journalist Bill DeYoung has built a successful lifelong career by asking people questions. In celebration of the release of his third book, I Need to Know: The Lost Music Interviews, he’ll be changing roles and answering them at The Studio@620 on Thursday, August 22.

DeYoung, a reporter and editor for 30 years, including 18-plus at the Gainesville Sun-will sit down with The Palladium’s Executive Director Paul Wilborn for a chat about his interviews of rock superstars – including Tom Petty, Neil Young, Linda Ronstadt and Emmylou Harris – that led to the birth of the publication. The night includes live music and readings from the book.

Creative Pinellas asked DeYoung a few questions ourselves, including what he thinks about Neil Finn – one of his favorite songwriters – being added to Fleetwood Mac.

Write about what interests you. If you’re passionate about your subject, it will show. If you’re not, find another job. And never confuse your opinion with journalism. Sometimes that’s a fine line to walk.

Although we first met maybe three years ago, we’re both local boys (him: Temple Terrace, me: St. Pete) and our careers followed relatively similar trajectories. He’s one of the funniest people I know, which counts for a lot. And like me he genuinely cares about the arts in the Tampa Bay community.

Not at all. This is my third book, and I’m still not used to it!

I don’t know that anything weird came out of these. When you’re in my line of work, you interview dozens, maybe hundreds, of people each year. In local newspapers, and music magazines, that’s just what you do. You become the connection between your subject and your readers.

The ones in this book represent interviews that I thought were historically interesting and were reasonably detailed – and, in the case of Tom Petty, I think I had a unique perspective because he knew me as the guy from his hometown paper.

In this book? Well, ‘nice’ in journalism is usually interpreted as ‘forthcoming,’ so using that as criteria I’d have to say Merle Haggard. He was engaging, and hilarious, and extremely sincere. Not so nice? Dave Mason – remember, that interview was done 23 years ago – is still known today as a rather difficult person. He was then, too.

John Lennon. The Beatles have been very, very important to me, since I was a kid growing up in St. Petersburg.

Oh, sure! Without naming names, of course. At a daily paper, along with massive amounts of local coverage, you did phone interviews with whoever was coming to town, to advance the show. In the ’80s, ’90s and beyond, there were lots of ‘flavors of the week’ pop singers whose music didn’t do anything for me – and more than a few old rockers, teen TV sensations and stuck-up actors. But you stayed objective because that was your job. Everyone was treated respectfully – they were just doing their job, too.

Yeah, I did lots of pieces with Neil – one of my favorite songwriters – over the years, but I didn’t put any of them in the book. What do I think about the Fleetwood Mac thing? I think that booting Lindsey Buckingham was a petty and ridiculous move. It’s not FM anymore. As for Neil, I guess he can use the money. More power to him.

You can find out more about
Bill DeYoung’s work at billdeyoung.com.

I Need to Know: the Lost Music Interviews
with Author Bill DeYoung takes place
at 7 p.m. on Thursday, August 22
at The Studio@620, 620 1st Ave. S. in St. Pete.
Admission is free. Find out more at thestudioat620.org.