Not unless you’re a Deadhead.

We’ll give it a go anyway.

This is the gear that Alan Gilman, lead guitarist for Uncle John’s Band — Tampa’s long-standing Grateful Dead tribute act — will use for the group’s concert at the Palladium on December 20. . .  A custom-made Wolf replica guitar with single-coil pickups; a modified SMS Jerry Garcia model pre-amp; a McIntosh MC2300 amplifier; a Hard Trucker cabinet loaded with three JBL E-120 speakers; MXR Distortion Plus and MXR Phase 100 effect pedals; and a Wilson Colorsound wah-wah pedal.

The equipment setup is what Garcia used for the Dead’s concert at Tampa’s Curtis Hixon Hall on December 19, 1973, which Uncle John’s Band will replicate (not note-for-note, we’ll get to that in a minute) 46 years and a day after the original performance.

It’s among the myriad gear combinations Gilman employs, an inventory that includes a dozen mostly custom guitars and an untold number of amps, speakers and effects — all in the name of re-creating the indelible Jerry sound throughout the late guitarist’s many eras.

It also exemplifies the lengths that members of Dead tribute bands — this one, at least — will go to accurately portray music that was spontaneously performed many decades ago.

“I like doing the commemorative shows,” Gilman, 60, says, speaking of specific Dead concerts UJB reenacts. “It’s a Deadhead thing I guess — they love to hear a show on a night they weren’t there — or maybe they were there — reliving that moment, being transported back in time. Plus I get to bring very specific gear, which makes it easier for me.”

Then there’s the playing. Gilman’s goal is to effectively channel Jerry Garcia, reproduce the legend’s sound, render his licks and lines, keeping it all as accurate to each period as possible. Gilman does not, however, play Garcia solos verbatim.

“What I play is based a lot on auditory memory,” he explains. “A band like Dark Star will play a whole [Dead] show exactly, which is hard to do. I want to get to the feeling. I listen to the solos and register them in my head, then make sure I do certain licks and signature nuances, that are the highlights. 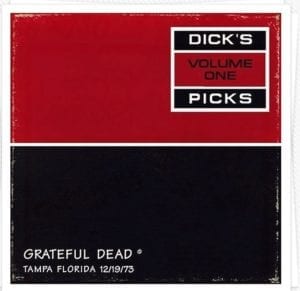 “I personally don’t like to copy. It’s tedious to do that. The other band members aren’t doing it, so if I copy it restricts what they want to do. It’s about striking a balance. You don’t want people thinking, ‘Gosh, I could’ve stayed home and played that on my stereo.’ It’s letting them remember the show, but making it a little different and fresh.”

Uncle John’s Band chose Curtis Hixon Hall, Tampa, FL 11/19/73 because of its local connection, of course, but the concert is also highly regarded among Deadheads — so much so that it’s Volume 1 of Dick’s Picks, a compendium of 36 specially curated live recordings.

UJB debuted the set at this year’s Gasparilla Music Festival in March. “They gave us an hour and a half,” Gilman recalls with a chuckle. “We wanted to do all the songs from the show, so we had to abbreviate some of the jams. We got it in right under the bell. For the Palladium show, we’ll get to flex our muscles a little more.”

The Curtis Hixon concert includes 14 songs, among them such familiar titles as “Truckin’” and a 21-minute “Playing in the Band,” as well as Johnny Cash’s “Big River” and Chuck Berry’s “Around and Around.” The Dick’s Picks recording clocks in at 2 hours, 4 minutes and 59 seconds. How long will UJB go? No tellin’.

The group’s origins date back to 1989, when Edwards formed the Dead tribute band Ugly Rumors. Gilman, who joined in ’93, recalls that the ensemble took on its current name in the mid-1990s. UJB has done a 20-year residency at Skipper’s Smokehouse on Thursday nights that totals 1,078 shows. In 2015, the ensemble played for a VIP party each afternoon during the Grateful Dead’s three-day “Fare Thee Well” run at Chicago’s Soldier Field.

UJB also works the Florida festival circuit and other local venues, but the Skipper’s gig is its bedrock. Each Thursday, they kick off at around 8 p.m., play 80 to 90 minutes, take a half-hour break, then return for a second set that usually runs two hours.

Gilman, who works by day as an anesthesiologist at two Bradenton hospitals, arranges his medical schedule to allow him to play his best on Thursday nights. At Skipper’s, the group renders a mix-and-match set of Dead material, often focusing on an era, but not re-creating specific concerts. The band has a library of some 200 songs, but usually pulls from a list of 30 to 40.

According to Gilman, Uncle John’s Band is essentially a leaderless unit, although Edwards, as founder, enjoys senior status and has primary influence over the arrangements. The members divide up business aspects, but on stage it’s more or less democratic — on the fly, no voting necessary. Any given Thursday might find one key member organically coming to the fore. “Sometimes I feel like I need to steer the band, kind of force the issue and take over,” Gilman says. “Rich, as the main singer, knows when he wants to take it back to the next verse, but as a rhythm guitarist he can’t do a lot in developing dynamics. I’m in a position to know when the jam should build up and go someplace else.”

While most improvising guitarists spend years developing their own voice, Gilman is comfortable residing in the Garcia zone. “I play some acoustic here and there,” he says. “But I play Jerry so much, it’s hard to unlock from the feeling and mentality. It’s hard to transition away from his playing style.”

Find the lineup, setlist and details
of the classic 1973 Curtis Hixon Hall
performance at jerrygarcia.com