Still working on Madness rewrites, and this weekend we head to Miami for City Theatre’s Summer Shorts Festival, where Duck is in the lineup. 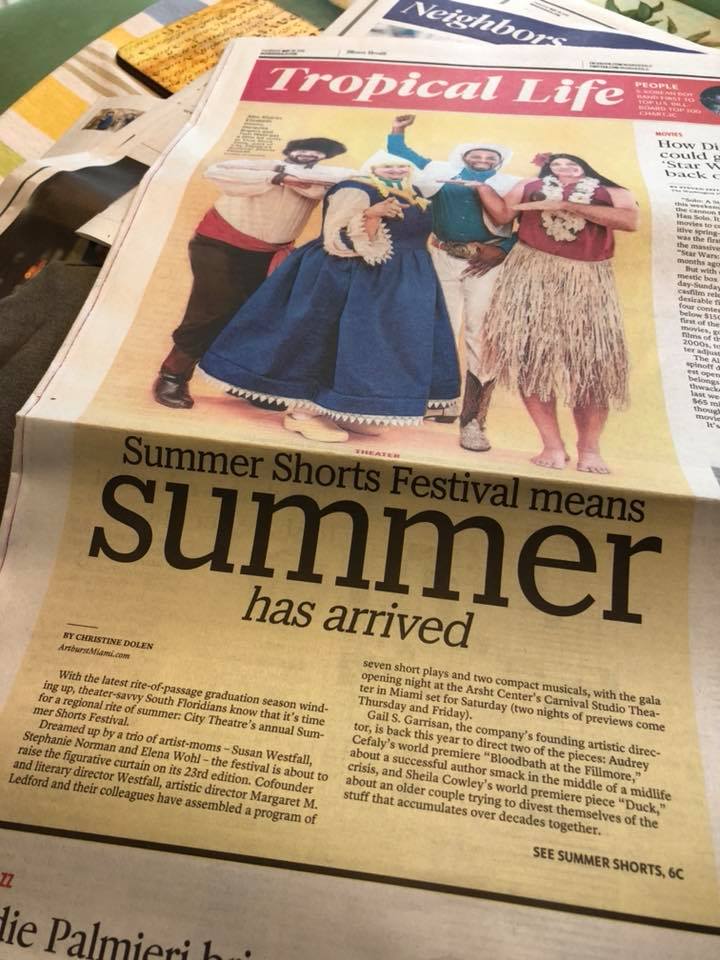 Susi Westfall’s City Theatre is a gorgeous downtown performance space in the Adrienne Arsht Center, with a big black box theatre, a wonderful creative team, top production values and an enthusiastic audience. They sell out a six-week run of Summer Shorts each year, playing to a rowdy crowd of ten-minute play fans, mostly comedies.

We’re glad to know Susi from the CityWrights Playwriting Conference she hosted for many years. She’s a playwright, a producer, a devoted arts supporter, very involved with the National New Play Network and a lovely person. 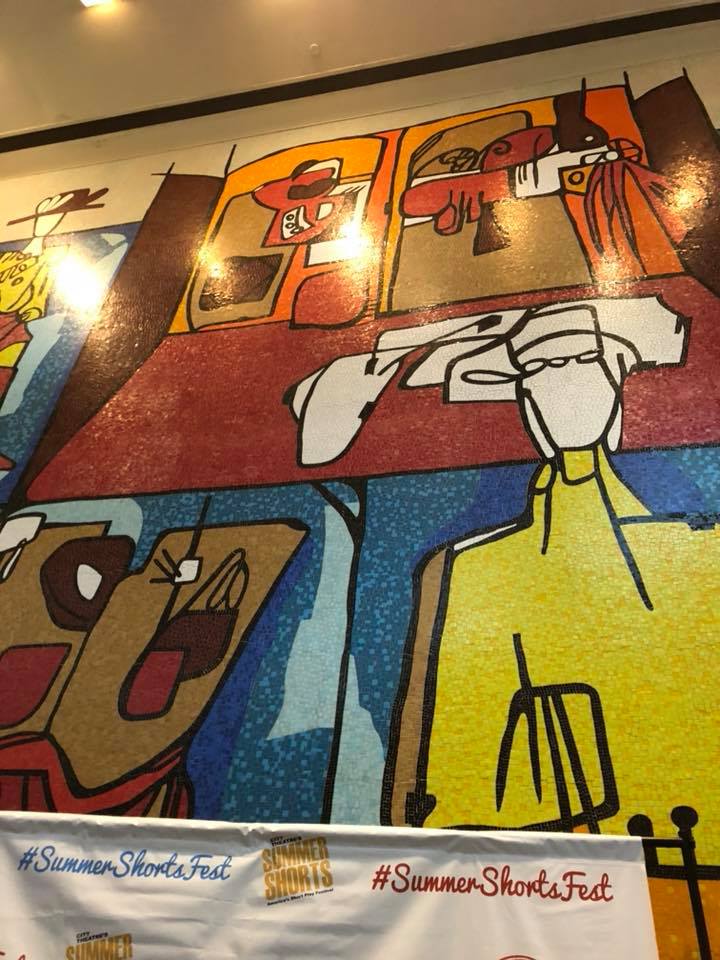 Margaret Ledford is City Theatre’s Artistic Director and we meet at dinner before the show, a jolly, festive meal with the visiting playwrights. Margaret is warm and welcoming, a skilled director who also works with dancers and creates devised works with the Mangrove Creative Collective that are rooted in Miami’s culture.

And it’s lovely to meet playwrights like Mark Harvey Levine, the king of short play festivals who’s had hundreds of short plays produced. We meet Ian August and I realize his name is familiar from reading a glowing review of his play, Donna Orbits the Moon, years ago on a theatre blog and trying ever since then to find a copy of the script. It’s now up on the New Play Exchange, and Ian is a lovely guy working on a number of interesting projects. 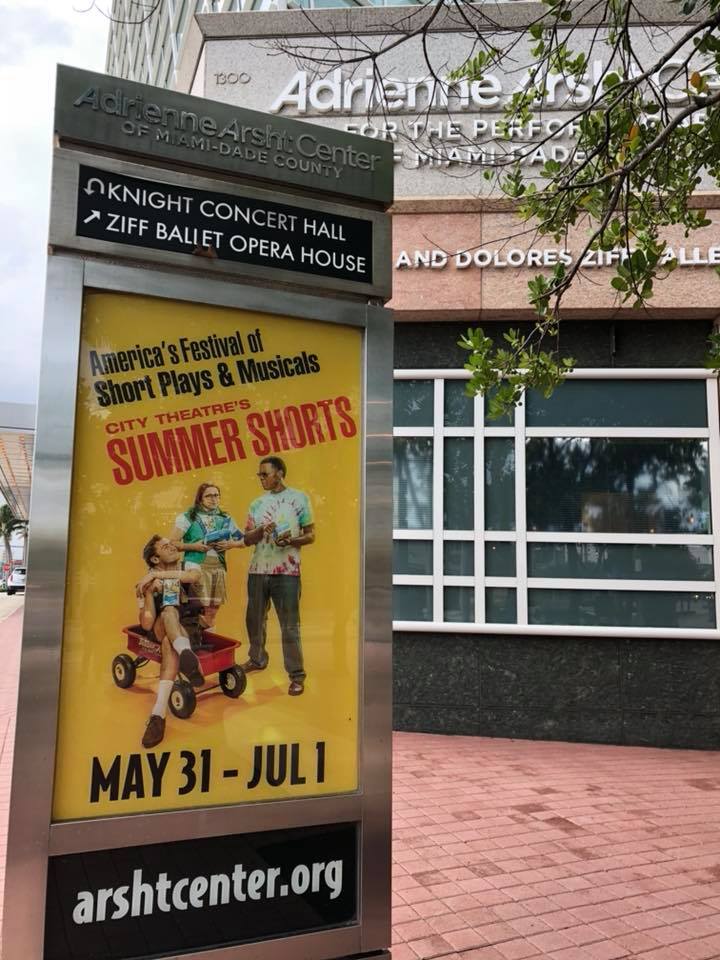 At the theatre, we join a full house of vocal and appreciative audience members, who come to Summer Shorts for a good time. It’s a series so popular that City Theatre has branched off into Shorts on Ships, Shorts Gone Wild, focused on LGBT and progressive audiences – and Short Cuts, a program that tours South Florida public schools with commissioned short plays about combatting bullying, developing self-respect and overcoming obstacles. One of the plays we’ll see tonight, Bekah Brunstetter’s Run, was part of that project this year, where a father is trying to get his un-athletic daughter to run a full mile.

It’s beautiful to see that all the plays in Summer Shorts feature diverse casting and interracial couples and families, like it’s nothing unusual. And I’m glad to see on the program Run and another play are directed by our pal Michael Yawney, playwright and director who teaches at Florida International University and runs The Greenhouse new play development program there.

Then there’s Duck, with Tom Wahl who was a raucous housecat moments ago, and Beth Dimon, who was just a momma elf. Duck is quieter than the other plays, a moment when the audience can catch their breath as two skilled actors go through unseen piles of heirlooms, realizing that they weren’t listening closely enough to the stories behind all the things they’ve inherited. . .  and now there’s no one left who remembers. 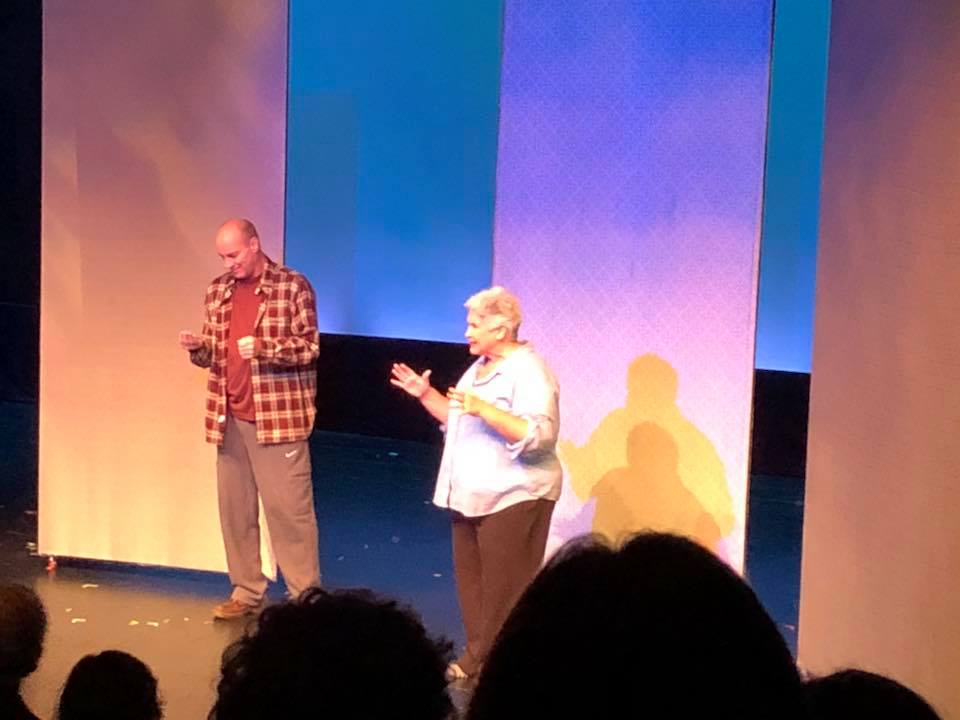 Duck is directed by Gail Garrisan, who directed my short play, Flowers, in 2016, the first of its three productions in a year.

The whole program of Summer Shorts is energized and fun, and a top-notch production. The grand finale is Mark Harvey Levine’s One More Time, where the characters trapped in Disneyland’s “It’s a Small World” struggle against their day job. 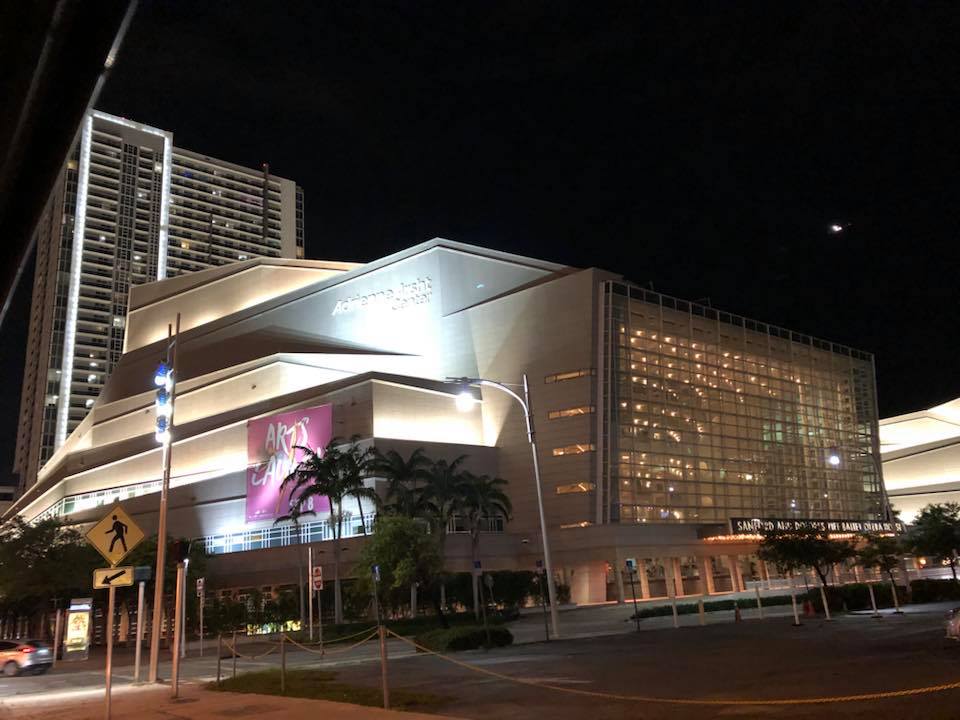 On Saturday, we enjoy a playwriting workshop with the wonderful Steve Yockey, a terrific and engaging teacher and a favorite of the National New Play Network. At the workshop we catch up with Michael Yawney and Juan Sanchez. Juan is working on “Miami Motel Stories,” a series of a site-specific, immersive theater pieces that combine narrative, performance, history and architecture, in historic hotels all around the city.

We wind up having lunch next to Steve Yockey and Susi Westfall. Steve kindly remembers my aim from a few years ago, to write plays that embrace a variety of artforms. We talk about the challenges of developing those very visual, highly theatrical works, when most developmental opportunities are readings with actors at music stands.

Steve’s work is boldly visual, and he surprises me by saying that as I keep doing theatre that’s based on movement, visual art and dance, that the time will come when I don’t have to try those moments out to know they’ll work – I’ll know from experience. Then I can use music-stand readings to fine-tune the dialogue and story – and just tell directors, trust me. This silent movement or this gesture or this visual is going to work.