Finally, a new draft of Madness. I think it’s much improved, with a stronger vein of loss and longing throbbing through the madcap comedy. I send it off to Chicago Dramatists for Dana Lynn Formby to give me dramaturgical feedback. And send it to director Dan Granke and choreographer Paula Kramer to take a look as we get closer to the workshop in September.

This week I have a very productive cup of coffee with visual artist Kenny Jensen, who creates gorgeous work that looks deeply at the natural world. Kenny’s about to start his first public art installation at USFSP, so he doesn’t have time to build a set for the Madness workshop but kindly offered to give me some ideas.

Kenny’s inventive artwork from found objects makes me think of the homemade Forest in Madness. He takes the project seriously and the more he talks, the more ideas he gets. I write as fast as I can as Kenny comes up with ways for the actors to create the set like a game, with visible pieces that build up meaning as they get put together.

He thinks the key to the set is the dancers interacting with the objects – finding out how things move and where it feels right to place them. Kenny gives me ideas about how to display the balloons that represent the Sun and Moon, and talking with him reminds me that those have to happen on opposite sides of the stage, with the Sun setting in the West as the Moon rises in the East. Kenny understands that the Dancers are the primary set, and need to be the primary decisionmakers on what the set looks like.

We agree that modern dance is very like an abstract painting, and talk about the abstract art in Madness. Kenny suggests we use a very simple set that’s clearly not at all realistic, and rely on the dancers to paint the structures with their bodies, and the bolts of colored fabric that are used throughout the script.

He also has the fantastic idea that Matt as our Drummer and sound effects artist use the entire set as a Foley device, creating sounds by playing the space as an instrument.

This week is the third year that Matt’s been chosen to write for Tampa’s annual 4×6 Fest, a popular 24-hour play festival organized by Brianna Larson. This weekend Matt wrote One Fall Over and the Whole Thing Go from an old photo of a game of dominoes and the headshots of three actors, given to him at 7 pm on Saturday night and due at 7 am Sunday morning. 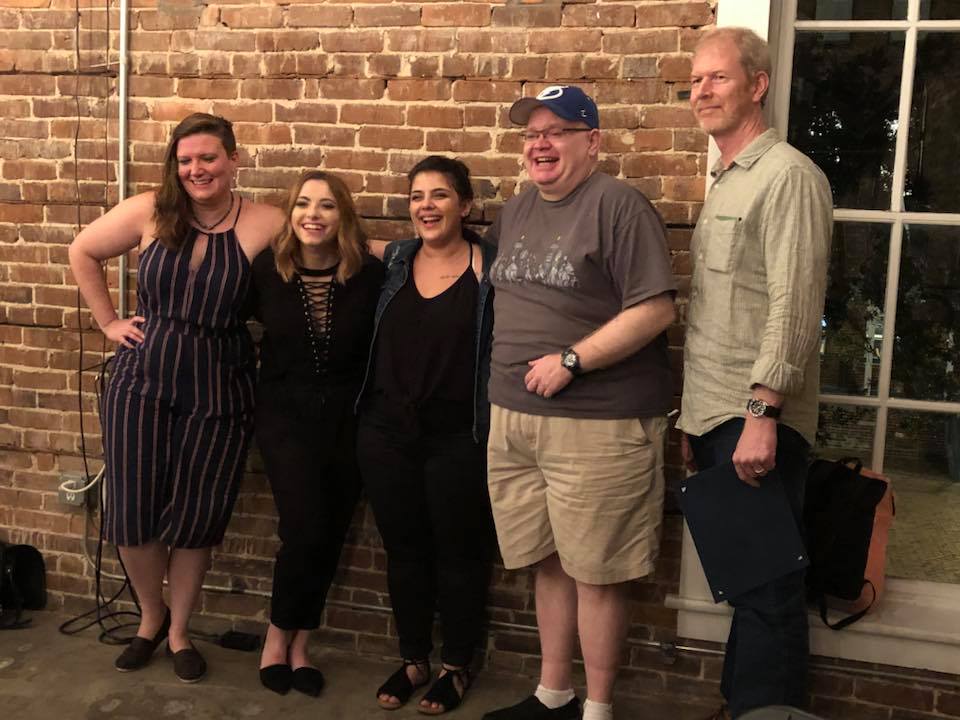 While joining a huge crowd to watch the festive 4×6 Fest performance on Sunday evening, I check my email and get two rejections – plus a notice that Hue and Saturation will debut at the Changing Scene Theatre Northwest’s Summerplay Festival in September. And a note that Teatime is one of 5 scripts that won the British Theatre Challenge, with a production in London in August.

At the 4×6 Fest, Matt’s play gets a great response and we all cheer as Matt Cowley wins the judges’ award for Best Playwright.