I hesitate to talk about my current work because sometimes these projects take a long time. It can jinx them to even talk about them! 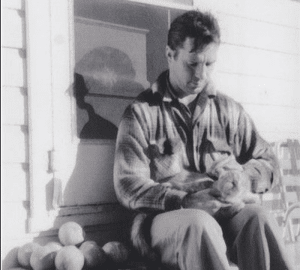 Jack Kerouac moved to Florida from New York, first to various neighborhoods in Orlando in December of 1956, and then finally to St. Petersburg, where he died in 1969. During those thirteen years, he was in and out of the country, going to France, Tangiers, Canada, and Mexico. He also owned houses in Northport, Long Island, and Cape Cod, and he lived in a house in Lowell, MA.

He moved to Florida because his ailing mother wanted to live somewhere warm. He had promised his father, upon his deathbed, that he would take care of his mother. This became a life-long task for Jack Kerouac, since he did not live long, dying at 47 years of age.

I have been able to find and interview people in St. Petersburg who knew Jack while he lived here. One of them was very close to him, and spent many nights drinking and talking. Another group of people hung out at a bar here that they described as “the West End Cafe” of Florida, where Kerouac would be among those who would recite poetry.

I will attempt to place Kerouac within the context of the on-going themes of that generation. The Beat generation had a strong focus on the numbness and displacement felt after the bombings during World War II. As the years passed, the hippies became the prevalent counter-culture. Kerouac despised the hippies for their cult-like adherence to long hair, bell bottoms, and other “uniforms,” and their anti-war and anti-American sentiment.

I will look closely at the differences in Greenwich Village and New York, compared to Florida which itself was undergoing a strong shift in political power that affected the social order of life here.

And that’s about all I feel comfortable telling you. I hope to be able to get back to work on that film soon.