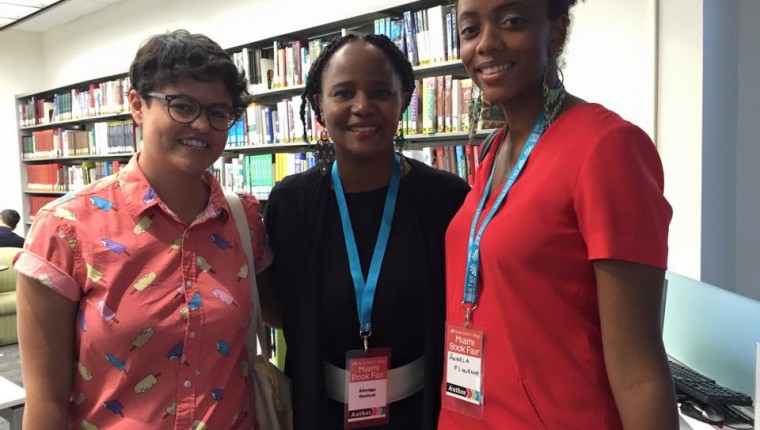 . . .
At tonight’s Emerging Artists conversation, an audience member asked about our artistic influences. My fellow artists gave very lovely and articulate answers, and I thought I’d use this week to write about one of the main influences on my writing.

Edwidge Danticat is a Haitian writer who followed her parents to New York City when she was twelve years old. Though she was supposed to be on track to become a nurse, such was her love for writing that she decided to pursue it instead. She got her MFA, and published her novel Breath, Eyes, Memory in the ’90s. Since then she’s published numerous short fiction and nonfiction collections, novels, essays, etc.
. . .

. . .
I’m not often starstruck by writers, but I’ve been struck by her ever since I read her novel The Farming of Bones as an undergrad. The novel tells the story of two lovers who are separated after the Parsley massacre of Haitians in the Dominican Republic. When I read it, I’d only been in the US a couple of years, and it was natural for me to see her as a role model. I had come from a similarly poor country, with similar political problems (kidnappings were a major issue in both Haiti and Colombia at the time), and I also wanted to write fiction in a language that wasn’t mine because I now lived in a country where people didn’t speak my language.

I was bowled over by the novel’s story and its lyricism, but what really turned me into an ardent fan was the fact that she was writing about the land where she came from. I don’t know why I had assumed that, if I wanted to live in America, I had to write about America. Edwidge’s writing gave me permission to write about the place I came from and was still obsessed with. I read more of her books after that, and she has remained the writer I can point to and call a role model. . . .
I’ve now had the immense luck of meeting Edwidge twice. The first time was not long after I read The Farming of Bones, when she visited the University of Tampa for a reading. She visited the fiction class I was enrolled in at the time, and we students spent some time asking her questions, which she thoughtfully and generously answered. Afterward, we talked a little bit about the turmoil in our countries.

The second time was about six years ago, when I had the opportunity to go backstage at the Miami Book Fair. I was with a friend who had just published a novel, and she took me everywhere she went. On the way to an interview, there was Edwidge, by herself, and both my friend and I became absolutely giddy. My friend went up to Edwidge and introduced herself, and they had a short conversation before my friend was whisked away to her interview. I’m a very introverted person and was extremely nervous to be left alone with Edwidge. What if I said something stupid?
. . .

. . .
What happened instead was that she started asking me questions – what I wrote about, where I was from, what I was working on. From that, the conversation flowed naturally, and she was as generous as ever. Before I knew it, half an hour of talking about being writers and immigrants had passed, and after we said goodbye, I went to find my friend. I was floating.

I guess all this is to say, it’s truly a beautiful thing when the artist whose art you admire the most turns out to be a generous person who wants other artists to thrive. I hope to be a fraction of the human being she is – and I always think about honoring her when I work on my writing.